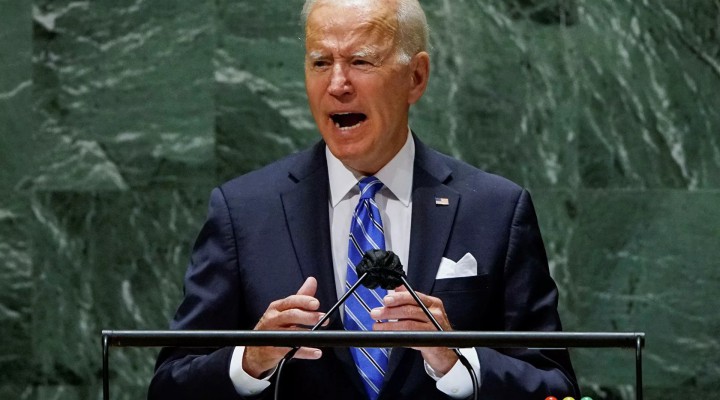 It’s nice to hear President Joe Biden saying that the US “era of relentless war is over”. But “nice” doesn’t mean “credible”. Indeed, the probable chances are that Biden’s words are sugary, hollow and disingenuous. Sentimental candy-floss.

When Biden addressed the annual United Nations General Assembly this week he was giving the usual spiel that we have come to expect from US presidents at the podium. Rosy, florid platitudes, full of self-congratulation and presumed American virtue. But, ultimately, as usual, it is a feat of US duplicity and hypocrisy meant to hoodwink the rest of the world from the reality of Washington’s systematic warmongering.

“I stand here today, the first time in 20 years the United States is not at war. We’ve turned the page… We close this period of relentless war, we’re opening a new era of relentless diplomacy.”

That feel-good soundbite is shot through with lies and deception. Biden is referring to the forced retreat of US military after its defeat in Afghanistan – America’s longest war. Biden makes it sound as if it was some kind of honorable end of hostilities. When the reality is the US was beaten and mired in war debt.

The United States invaded Afghanistan in criminal aggression under the false pretext of “fighting terrorism”. Its forces should never have been in the Central Asian country in the first place. Now it is ruled by Taliban militants whom the US ousted two decades ago. Talk about a futile waste of millions of lives, and trillions of dollars. Biden has the gall to make the retreat from Afghanistan sound as if it is noble.

The first time in 20 years the United States is not at war, declares Biden. That’s a barefaced lie. US troops are illegally occupying parts of Syria denying that nation access to its oil fields. The US is carrying out airstrikes in Syria, Iraq and Somalia.

The Biden administration, like his predecessors, is plying an anti-Russian regime in Kiev with billions of weapons to wage a civil war against the ethnic Russian people of Eastern Ukraine. That war has been festering for more than seven years and runs the risk of escalating into a confrontation between the US-led NATO alliance and Russia.

President Biden referred to the foundation of the United Nations in 1945 following the Second World War – the greatest conflagration in human history with an estimated death toll of nearly 75 million, most of the victims being Soviet and Chinese citizens.

What’s he talking about? In every decade since the Second World War, the United States has been involved in one or more major armed conflicts, from Korea to Vietnam, from Latin America to Africa and the Middle East.
The ostensible end of the war in Afghanistan is but a punctuation mark in an ongoing history of American wars of aggression against the rest of the planet. This is about turning the page alright… to the next US war.

That’s because the US is an imperial power that relies on coercion, force, and ultimately violence in order to assert its writ over other nations. Imperialism was at the root of the First and Second World Wars. Why would we expect that kind of power to stop waging wars?

Biden’s rhetoric at the UN is the euphemism of a crime boss. He talks about “working together” and how we should “redouble our diplomacy” to “end conflicts”. He says the United States is not “seeking a new Cold War or a world divided into rigid blocs”.

This pious bluster came only days after Biden announced a new military alliance with Australia and the United Kingdom – AUKUS – which will supply nuclear-powered submarines to Australia for the purpose of ramping up Washington’s hostility towards China and Russia.

US policy is essentially about polarizing and dividing the world into hostile camps in order to bestow hegemonic control. American capitalist power and its addiction to militarism is all about driving conflicts and war.

Biden’s soundbite about the world being at “an inflection point”, facing a “decisive decade” is half-right. But not in the sense he means of US leadership. We are facing another build-up to more US war, this time against China and Russia. The only way out of this dead-end is for people around the world, including the American people, to realize the lies and duplicity they are being sold by US and Western misleaders.