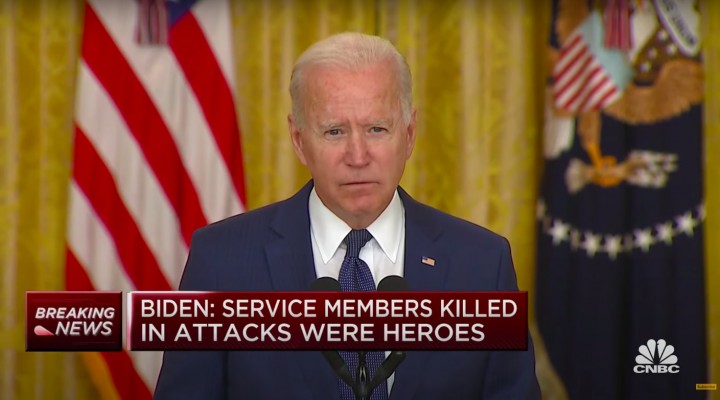 ISIS has reportedly claimed credit for an explosion near Kabul’s Hamid Karzai International Airport. As of this writing there are around 90 dead including 13 US military personnel, though to read western mainstream media reports you’d think only US troops died and not scores of Afghans as well.

This was the deadliest attack in a decade on US troops in Afghanistan, which is odd to think about considering how many people the US military has killed during that time; just between January and July of this year the war killed 1,659 civilians. The way the US war machine has shifted to relying more on highly profitable missiles and bombs and unmanned aircraft to avoid the bad PR of flag-draped bodies flying home on jets is making the murder of foreigners a safer profession than working at a convenience store.

Because US military casualties of this size have become more rare despite their being spread throughout the world in nations whose people don’t want them there, news of those 13 deaths is being met with shock and astonishment instead of being regarded as a very normal part of foreign military occupations. People are acting like these were mall cops in Ohio and not military forces overseeing the tail end of a 20-year war overseas, and pundits and politicians are demanding more bombs and more military interventionism in response to people on the other side of the world attacking them in their own country.

It is sickening and enraging to hear that at least 12 U.S. servicemembers have been killed at the hands of terrorists in Kabul. We need to redouble our global efforts to confront these barbarian enemies who want to kill Americans and attack our homeland. My full statement: pic.twitter.com/ydke3F6sZ7

Senate Minority Leader Mitch McConnell released a statement calling on the US to “redouble our global efforts” in the war on terror in response to the attack, seizing the opportunity to promote more “we fight them over there so we don’t have to fight them here” nonsense.

“Terrible things happen when terrorists are allowed to operate freely. This murderous attack offers the clearest possible reminder that terrorists will not stop fighting the United States just because our politicians grow tired of fighting them,” McConnell said. “I remain concerned that terrorists worldwide will be emboldened by our retreat, by this attack, and by the establishment of a radical Islamic terror state in Afghanistan. We need to redouble our global efforts to confront these barbarian enemies who want to kill Americans and attack our homeland.”

Yep, yeah, that makes sense Mitch. My neighbor attacked me when she caught me in her house at night going through her valuables. This proves she’s always wanted to attack me in my home. I need to go fight her over there so I don’t have to fight her here.

What the US actually needs to do is get the absolute fuck out of the entire region and stop creating more and more violent extremists with insane acts of mass military violence for power and profit. The very last institution on earth who should be trying to do something about ISIS is the institution whose actions created ISIS in the first place.

But of course acting in accordance with that self-evident fact is too much to ask of the US government, and Biden has announced that he has ordered his commanders “to develop operational plans to strike ISIS-K assets, leadership and facilities.”

"We will respond with force and precision at our time, at the place we choose and the moment of our choosing." https://t.co/aVzjnzGos5 pic.twitter.com/kTw6VbCCSA

So the US war machine will continue to rain down highly profitable explosives upon Afghanistan for as long as it likes, using this attack as justification for more military operations instead of taking it as yet another sign that what it has been doing is not working and keeps making things worse.

Step 2: Wait for some of those people to hate you and want to fight back.

Step 3: Use their desire to fight back as justification to repeat Step 1.

The “war on terror” is the greatest scam ever invented.

0 thoughts on “The ‘War On Terror’ Scam Continues”