HOME / WORLD / If Biden worried less about the optics of communicating with the Taliban, the IS-K carnage may not have happened 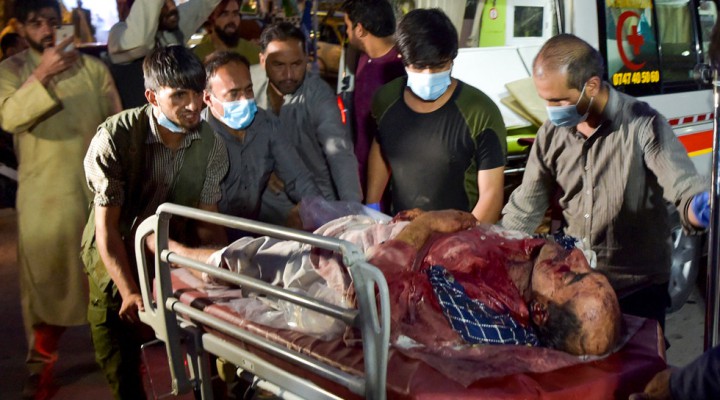 Despite having talked with the Taliban for years, the US is now not keen to be seen as cooperating with it because it looks so bad domestically. That has prevented better security at Kabul airport, with horrifying results.

According to the Pentagon spokesperson, John Kirby, the US can confirm that what it calls a “complex attack” occurred in the vicinity of Kabul International Airport’s Abbey Gate, one of the main entry points for civilians seeking to be evacuated from Afghanistan, and the Baron Hotel, a known gathering point for British and American personnel awaiting access into the secure perimeter at the airport.

We can confirm that the explosion at the Abbey Gate was the result of a complex attack that resulted in a number of US & civilian casualties. We can also confirm at least one other explosion at or near the Baron Hotel, a short distance from Abbey Gate. We will continue to update.

At least 13 US military personnel and 95 Afghans, were killed in the explosions, with more than 100 more injured, many of them severely. The Islamic State-Khorasan (IS-K) terrorist group has claimed responsibility.

The Pentagon had warned US citizens seeking evacuation from Kabul International Airport to leave the area immediately, with an emphasis on avoiding three identified gates into the airport – including the Abbey Gate.

According to the Pentagon, the reason for this warning was the monitoring by US intelligence of so-called “intelligence streams” which strongly suggested that IS-K was preparing to carry out a suicide attack at the airport. This kind of intelligence is usually derived from listening in on cellphone conversations, monitoring text exchanges, and/or from raw information gained from human intelligence sources.

The Taliban, too, was concerned about the possibility of what it called “nuisance attacks” by IS-K, noting that the chaos at Kabul Airport caused by the US-led evacuations contributed to this threat. “Our guards are also risking their lives at Kabul airport; they face a threat too from the Islamic State group,” observed one Taliban official.

Despite this shared concern over the threat from an organization both the US-led coalition and the Taliban view as a mortal enemy, domestic political concerns over being seen as too close to the Taliban prevented the establishment of the kind of joint security procedures that could have complicated the efforts of any would-be suicide bomber.

There have been constant discussions between US military officers on the ground in Kabul and their Taliban counterparts about security at the airport and for US and allied citizens desiring evacuation. These include the US providing the Taliban with lists containing the names of US citizens, Green Card holders and Special Immigrant Visa (SIV) applicants cleared for travel that would ostensibly assist the Taliban in screening the thousands of people trying to reach the airport.

While these talks appear to be primarily focused on the facilitation of the movement of evacuees, they have included the provision of some intelligence information to the Taliban which resulted in the prevention of IS-K attacks on the airport. This, however, begs the question as to what was withheld, especially in light of the specificity of the threat of a suicide bomber targeting the gates at the airport. Given the proven ability of the Taliban to act decisively on intelligence provided about threats to US personnel, one can only wonder what would have happened if all relevant intelligence had been shared, including the details about the pending suicide attack, and if the Taliban would have been able to prevent that attack as well. Clearly, in retrospect, keeping that information closely held did not contribute to the security of the airport.

The hesitation to be seen as too close to the Taliban is derived from a purely political mindset, where the narrative of a heroic rescue of people put in harm’s way because of the group’s victory in Afghanistan could not be upset by any counter-narrative painting the Taliban as erstwhile allies.

The Biden administration has continued the practice of holding direct, high-level talks with the Taliban. General Frank McKenzie, the commander of US Central Command, in whose area of operation Afghanistan resides, met face-to-face with senior Taliban leaders in Doha, Qatar on August 15. The purpose of this meeting was to establish a “deconfliction mechanism” between the US and the Taliban on the ground in Kabul that would permit the evacuation of designated personnel to continue without interference from the Taliban.

The next week, on August 23, the director of the CIA, William Burns, flew to Kabul, where he met with Abdul Ghani Baradar, a Taliban leader who was a former prisoner in Guantanamo, Cuba. While the CIA has not released any details of the meeting, it was most likely related to the decision on whether or not to stick to the August 31 deadline set by President Joe Biden, and embraced by the Taliban as a “red line”. Burns, a veteran diplomat, more than likely discussed measures that the Taliban would agree to post-August 31 involving the need to evacuate any American citizens or Green Card holders who were unable to be evacuated by the deadline.

The important thing about both the McKenzie and Burns meetings is the reality that the United States would never agree to such senior leaders meeting the Taliban ‘cold’;

there must have been a history of military and CIA connectivity with the Taliban that served as the foundation upon which the McKenzie and Burns meetings were set. The existence of this history of organizational connectivity, however, appears to have presented a political problem for the Biden administration, which built upon the legacy of direct negotiations with the Taliban put in place by the Trump administration to deconflict the withdrawal of US forces from Afghanistan from the Taliban offensive that eventually brought down the Afghan government. In short, the Biden administration could not allow any narrative to be introduced which somehow depicted the Taliban as cooperating with the US, especially to the detriment of our ostensible Afghan allies.

The reality is, however, that the US and the Taliban have been allied for years in an ongoing war against IS-K, which organized itself on Afghan soil in 2014. By 2016, the US was providing air support to Taliban forces as they fought IS-K fighters in Afghanistan. The Taliban would also provide vital human intelligence in support of CIA-led Omega “hunter-killer” teams targeting IS-K-controlled areas. The CIA, through its Doha Station, was a participant in the direct negotiations with the Taliban over the withdrawal of US forces from Afghanistan. Getting Taliban assurances that it would continue the fight against IS-K after US forces departed was a key negotiating point. The Taliban executed Mawlawi Zia ul-Haq, the former head of IS-K who was arrested by the Afghan government last year, in partial fulfillment of its obligation.

The manner in which the Biden administration undertook the mass evacuation of personnel from Kabul was driven by the need to sustain a narrative which held that the Taliban were an evil force, thereby justifying the emergency extraction of so-called SIV personnel (those Afghans who, having provided critical support to the US in Afghanistan, were at legitimate risk of being severely punished or killed if they fell into the hands of the Taliban) and US citizens alike.

While the Taliban have balked at facilitating a ‘brain drain’ of educated Afghans whose services will be required if Afghanistan is to have any hope of rebuilding after four decades of incessant warfare, they have not prevented the evacuation of SIVs (although anecdotal information suggests that some Taliban have blocked the movement of SIVs to the airport, while others have, in fact, been arrested and killed.) Moreover, the last thing the Taliban would want to do is to create the conditions for renewed US military involvement in Afghanistan by preventing the exit of US citizens that the Taliban itself wants to leave the country.

This reality was understood by the Biden administration on a strategic level. But to rely upon the existing US military footprint in Kabul (several hundred troops), combined with a similar number of Turkish forces, to secure the evacuation in cooperation with the Taliban at a tactical level was political suicide. Instead, the Biden administration surged thousands of US forces into Kabul Airport without adequate coordination with the Taliban, thereby engendering widespread panic among Afghan civilians, who flocked to the airport by the tens of thousands.

Even here, disaster could have been prevented by working with the Taliban to jointly secure the airfield as a singular, coordinated effort, inclusive of comprehensive intelligence sharing about the totality of the threats coming from IS-K.

This kind of cooperation, however, did not feed the “Taliban as a force of evil” narrative being pushed by the Biden administration. This is not to suggest that the Taliban isn’t a force of evil, but rather to point out that when it came to the safe evacuation of US citizens and SIVs from Afghanistan, the Taliban was actually one of the best friends we had, since we both had shared objectives – the rapid exit of the US from the country.

The unwillingness of the Biden administration to securely facilitate the withdrawal of US citizens and persons of interest from Afghanistan must be an issue of congressional interest. No stone should be left unturned in seeking out the facts and holding those culpable in this disaster to account. Most importantly, however, is the need to avoid allowing the human tragedy that has transpired on the ground in Kabul – and other human tragedies which may occur in the days to come – to distract the US from the mission of completing the withdrawal of all US forces from Afghanistan by August 31. For those that seek to use this tragedy as a springboard for increased military engagement, never forget that if the Taliban stops cooperating with our withdrawal, it can unleash a thousand suicide bombers who will inflict untold death on American service members and Afghan civilians alike. We were not able to win a war in Afghanistan after 20 years of fighting; there is no reason to believe that we could win one now.

0 thoughts on “If Biden worried less about the optics of communicating with the Taliban, the IS-K carnage may not have happened”