HOME / WORLD / US Wants Cake and Eat It 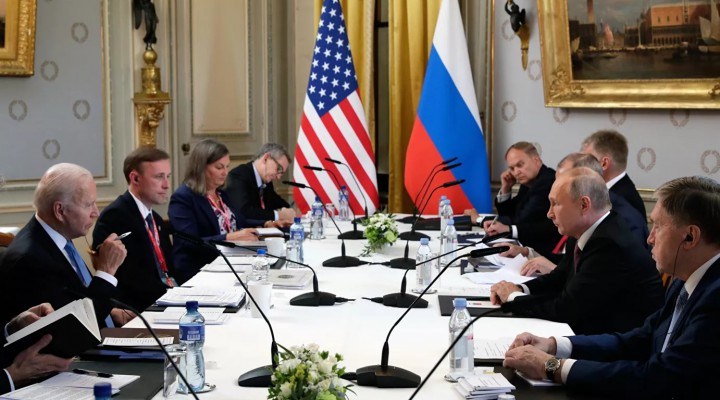 The Biden administration has defined its relations with Russia and China as a policy where “we cooperate when we need to, and confront when we have to”.

To be sure, the US will for confrontation is a lot more than its will for cooperation.

But this contradictory self-serving policy is unworkable. It amounts to the arrogant attitude of a greedy person who wants to have their cake displayed grandly while at the same time wanting to eat it. The figure of speech conveys the impossible reconciliation of mutually exclusive desires.

We saw this last week when President Joe Biden sent his envoy on global climate issues, John Kerry, to China with the remit to explore coordination between the two governments. Kerry said he wanted to find cooperation between the United States and China in combating the destructive effects of climate change. Both nations have been badly hit recently with extreme storms and flooding which many experts attribute to man-made climate impact.

Both nations are also the world’s biggest national economies and therefore potentially could have a significant bearing on formulating new policies to mitigate extreme weather events.

However, the US envoy was hit with a reality-storm when his Chinese counterparts told him that the cooperation sought is severely limited by Washington’s adversarial attitude in other policy areas. The Biden administration has continued imposing trade sanctions on China initiated by the Trump White House over dubious claims about Beijing’s malpractices in tech spying and theft. The Biden White House has also continued to rile up China with wild allegations of committing genocide over equally dubious claims about internal human rights conditions for its ethnic Uighur population in Xinjiang.

China is labelled as the biggest threat to US national security, while the Biden administration increases the number of military manoeuvres in the South China Sea for so-called “freedom of navigation operations”, as well as new weapons sales to Taiwan, the renegade island which Beijing claims sovereignty over.

So while the US says it wants to cooperate with Beijing on tackling climate change, it is poking China in the eye at every turn.

The same contradictory mentality in Washington is seen with regard to Russia. President Biden met with Russian leader Vladimir Putin back in June in what appeared to be a cordial summit in Geneva. Vows were made to cooperate on extending nuclear arms controls and on combating cybercrime.

Washington often talks, too, about the need to cooperate with Moscow in curbing international terrorism. Yet as with China, Washington thinks it can treat Russia as a pariah in every other sphere. It tried – but failed – to block Russia’s energy trade with Europe by sanctioning the Nord Stream 2 gas pipeline which will relay fuel from Siberia to heat millions of European homes. The project is nearing completion.

The Americans along with their NATO allies build up offensive military forces along Russia’s borders while conducting war manoeuvres in the Black Sea. Washington is arming an aggressive anti-Russian regime in Ukraine to the tune of $2 billion in weaponry over the past eight years. And then the US adds insult to injury by turning this reality on its head by accusing Russia of threatening European security.

The fundamental problem with US global power is that it is based on hegemonic dominance and futile ambitions of unipolar control over all other nations. That, in turn, stems from its oligarchic capitalist system. The concept and practice of international cooperation is anathema to the imperial-minded rulers and planners in Washington.Hence, the US power elite views everything as a zero-sum competition. No dissent or opposition to their presumed writ for global power can be tolerated. To that end, nations that do not subordinate themselves to US diktat are inevitably demonised as “enemies” and “threats”. (FILES) In this file photo taken on January 17, 2011, a Secret Service agent guards his post on the roof of the White House as a lamp post is adorned with Chinese and US national flags in Washington, DC
© AFP 2021 / JEWEL SAMAD

The Cold War mentality of demonising the Soviet Union never went away. It persists in ongoing US aspersions against Russia and China as “great power rivals” with a multitude of denigratory allegations as well as provocative hostilities. Hostilities that are gravely undermining global security and risking war.

The hubris of Washington makes it blind to its own absurdity. For when Washington finds it needs help on particular issues – whether that be addressing climate change, nuclear arms control, or ensuring regional stability following the mess it left behind in Afghanistan – then it calls on Moscow and China for cooperation. This is in the context of the US relentlessly antagonising and bad-mouthing those same nations.

Fortunately, Russia and China are strong enough to not indulge this arrogant duplicity. That’s why Uncle Sam keeps looking like he has cake all over his face.

US “Invests” in Infrastructure, But only to Compete with China

US vs. China: Where does Vietnam Stand?

Afghanistan: Chinese Reconstruction vs. US Sanctions

0 thoughts on “US Wants Cake and Eat It”