HOME / WORLD / All bark, no bite: How Biden and the UN will protect Israeli annexation 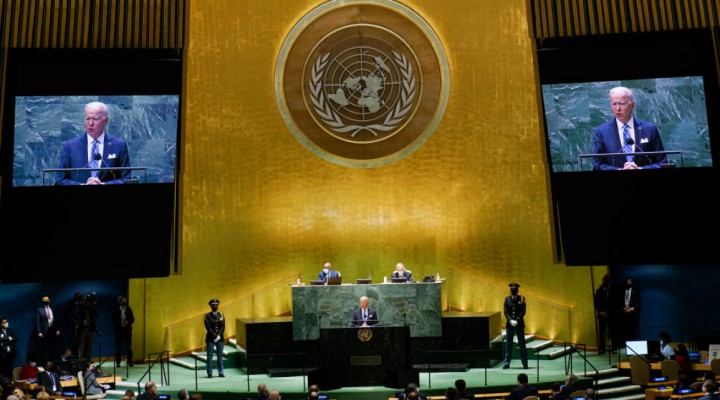 The Trump administration seemingly created a pariah state of the US with its blatantly aggressive foreign policy on Palestine. Once the Palestinian Authority was excluded from the political process, and the UN tacitly accepted the policy change, the US was able to steer Israel’s colonial expansion openly, free to focus its attention on Israel, which it has supplemented with a string of concessions leading up to the signing of the Abraham Accords.

At an international level, the hypocrisy towards the Palestinian question continued unabated. On one hand, the UN made a big deal out of rejecting the US “deal of the century” which ran contrary to the two-state diplomacy.

Yet, on the other hand, UN member states found no objection to the US diatribes against the organisation’s purported anti-Israel bias. Not because the organisation felt it could not defend itself against these unfounded claims, but rather speaking of an “anti-Israel bias” strengthens Israel’s security narrative at an international level, which, in turn, the UN bolsters by supporting Israel’s so-called “right to defend itself.”

“While US President Joe Biden is keen to sweep Trump’s legacy at the UN to the side-lines, the fact of the matter is that Trump was merely and overtly building upon previous US administrations’ international policies”

While US President Joe Biden is keen to sweep Trump’s legacy at the UN to the side-lines, the fact of the matter is that Trump was merely and overtly building upon previous US administrations’ international policies, especially its pro-Israel position, and Biden will continue that legacy.

It is no surprise then, that at the UN General Assembly, Israel, Beni Prime Minister Naftali Bennet met with the US Ambassador to the UN Linda Thomas-Greenfield, and was swift to describe the US decision to reengage with international institutions as “a good opportunity to bring balance to these institutions vis a vis Israel.” During his meeting with Thomas-Greenfield, Bennett extended her an invitation to visit Israel.

As Trump was seen as “breaking” with international law and consensus to support Israel’s colonisation, regaining the international perception of Israel was of paramount importance. US diplomats worked ed tirelessly to promote Israel internationally, and the road to de-facto annexation incurred no tangible opposition from the UN, especially once Secretary-General Antonio Guterres interpreted the signing of the Abraham Accords upon the condition of halting formal annexation as a step towards reinstating the two-state diplomacy.

ennett’s expectation that the US continues lobbying for Israel at an international level is a natural and clear strategy. In recent memory, the former US Ambassador to the UN Nikki Haley constantly attacked the UN for what she deemed an “outrageous bias” against Israel, and in 2017, she declared, “It seems like the rough breakdown at the UN is half the time on Israel and half the time on the other 192 countries.”

With Biden opting for the two-state diplomacy, Bennett is seeking to tread less belligerently than his predecessor, Benjamin Netanyahu, but with the same intent of preserving Israel’s impunity at an international level. In a meeting with Guterres, Bennett requested that the UN “must start treating the Jewish state as an equal partner, as opposed to attacking it disproportionately.”

What both Haley and Biden conveniently omit from their discourse is that the focus on Israel at the UN is proportional to the institution’s complicity with Israel’s settler-colonialism.

The “anti-Israel bias” accusation, actually, has no ground. For the UN to hold Israel accountable, which is not the same as bias, it would need to rethink its approach towards settler-colonialism and confront its role historically, such as with the 1947 Partition Plan that bequeathed 56 percent of Palestinian land to Jewish settler-colonists; thereby legitimising a practice of colonization and dispossession on indigenous communities.

The absence of addressing Israel as a colonial enterprise in effect set the stage to accepting Israel’s statehood, which happened in 1949 (after the launch of an incremental genocide that continues to date on the Palestinian population).

What the UN has given Israel, despite the US and Israeli claims, is unrivalled impunity when it comes to protecting its colonial violence against the Palestinian people. Israel is treated above any other state. The attention the UN does give to Israel is proportionate to that state’s violence, but the UN will maintain superficial scrutiny, with no real accountability, in order to protect the settler-colonial project and the international community’s complicity to that process.

US Secretary of State Antony Blinken will meet separately and together with Israeli Foreign Minister Yair Lapid and his Emirati counterpart Sheikh Abdullah bin Zayed Al-Nahyan.https://t.co/FbJuG8TdyF

Bennett’s speech at the UN General Assembly made no mention of Palestinians, and narrowed the focus to Palestinian factions, among other topics, and was unchallenged on that stage, thus consolidating Israel’s security narrative. Bennett’s focus on Palestinian factions mirrored Thomas-Greenfield’s approach when she spoke at a UN Security Council Briefing in May this year about Israel’s airstrikes on Gaza – the US merely called out Hamas and other Palestinian factions “to immediately halt rocket attacks.”

While the Biden Administration is not working as overtly as Trump, the latter has facilitated Biden’s foreign policy goal on the international stage. Since the international community thrives upon the two-state compromise, Biden has been under no pressure to be integrated into the fold.

“All the concessions the US granted to Israel which were previously perceived as a matter of international interest, have now been normalised as US foreign policy”

There have been no requests that the US reverses the Trump-era policies on Israel. All the concessions the US granted to Israel which were previously perceived as a matter of international interest, have now been normalised as US foreign policy. Ultimately, the UN seeks to bring balance back to the discourse and ideologies related to the two-state diplomacy; no more are the issues about holding colonisation accountable.

As a result, Bennett can rest assured that the gains Israel made from the Trump Administration will essentially be protected by the UN. One year on since the signing of the Abraham Accords, Israel’s Ambassador to the UN Gilad Erdan with no hesitation stated when asked about the two-state compromise, “Even the Biden administration, when they speak with us, they recognise that it’s not something that can currently be achieved.”

The road to Israeli de-facto annexation has been well marketed and now normalised. What Israel needs for the present and the future is an ally that can maintain a duplicitous façade – one that can maintain its adherence to the two-state compromise while keeping its opposition to settlement expansion at a minimum. Biden is well placed to do both.

0 thoughts on “All bark, no bite: How Biden and the UN will protect Israeli annexation”