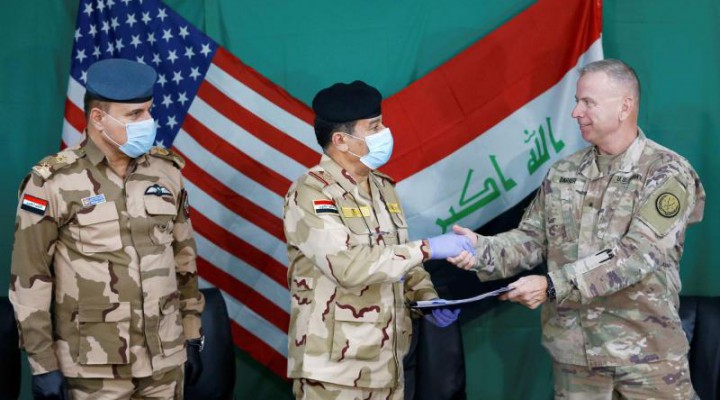 The US is left with two options to decide for its Iranian policy. The first is to keep the harsh sanctions imposed by Donald Trump and watch Iran reaching a military nuclear capability and empowering its allies without limits. Notwithstanding its unconcealed superior military power, the US is not in a position to prevent Iran from bombing the dozens of US military bases spread around the “Islamic Republic” and within reach of its long-range precision missiles. Iran can also close the strategic and vital strait of Hormuz and reach the Red Sea, the potential alternative the US and its allies were thinking safer in case of war with Iran. Moreover, Iran’s allies have expressed that any future war against the “Islamic Republic” means that the “Axis of the Resistance” will be involved. This indicates that the military theatre will expand to a large part of the Middle East. Therefore, this possibility of war on Iran is excluded and has been, as such, since Iran bombed the US most extensive military base in Iraq, Ayn al-Assad, without triggering a US response.

The second option is to lift all sanctions and de-escalate the Middle East’s tension on all fronts. The current US administration may be ready to start lifting sanctions to avoid the accelerated Iranian speed towards a military nuclear grade. However, President Joe Biden and his team are hesitant and may have other priorities to deal with notwithstanding the comments of its officials that diplomacy is the only solution for the nuclear deal.

Iran is certainly not waiting for the US to decide. It will continue its nuclear path, relying less on oil energy (under sanctions) as its primary income, as is indeed the case for most Arab States (Iraq, Saudi Arabia, the Emirates, and Bahrein). Iran made it clear that the nuclear deal is not linked to any other issues of concern to the US in the Middle East, even if Tehran said it was ready to hold separate talks on any matters when all sanctions are lifted. That is achievable only if the US returns to full compliance with the 2015 nuclear deal that former `President Donald Trump revoked unilaterally in 2018.

President Joe Biden showed he was not ready to leave Syria and Iraq and has no clear and strategic policy for both countries. Thus, it is expected to maintain the status quo. That means if one front, the nuclear one, cools down, the tension between Iran and the US will continue in other arenas, possibly at a lower rhythm. For Iran, the best arena to fight the US in seems –though not restricted to – Mesopotamia, where Iran enjoys numerous strong allies, ready to continue fighting and harassing the US forces regardless of their possible losses.

Following the last attack on the US forces, President Biden reacted unexpectedly to the attackers. His Secretary of Defence did not fall into the trap and refrained from hitting Iraqi militia targets. It seems the US military are learning to skip retaliation and avoid the tit-for-tat begged for by the attacking militia. For how long will the Pentagon tolerate to receive hits on the right cheek and offer the other one? Will President Joe Biden insist on keeping all his forces in Iraq?

Most probably not. A partial or total US withdrawal of troops may be an option for the US as long as the American forces maintain other forms of forces in Iraq. Many Iraqi officials, mainly Shia political leaders, including those close to Iran, are advertising for a change of flag (from US forces to NATO) which is on the table. However, this Iraqi-US “cosmetic surgery”, though feasible in both sides’ imagination (only), will not be accepted by Iran and its allies in Iraq. The difference between politicians and the resistance is enormous. Iraqi armed groups are expected to grab every opportunity to remind the Americans they should leave the country by attacking US logistic convoys travelling through Iraqi provinces.

For Tehran, a “European NATO force” undoubtedly means a US command and control force under European cover. This also indicates to the “Islamic Republic’ that the US threat against Iran will persist. What are the Iraqi choices in this case? Why are the US and Iran finding it challenging to meet on common ground, risking that hatred will remain?

US Vows Strikes for Attacks on Illegal Iraq Occupation

0 thoughts on “Iran rejects Iraqi-US “cosmetic surgery,” but US-Iran cooperation is not impossible. 4/6”