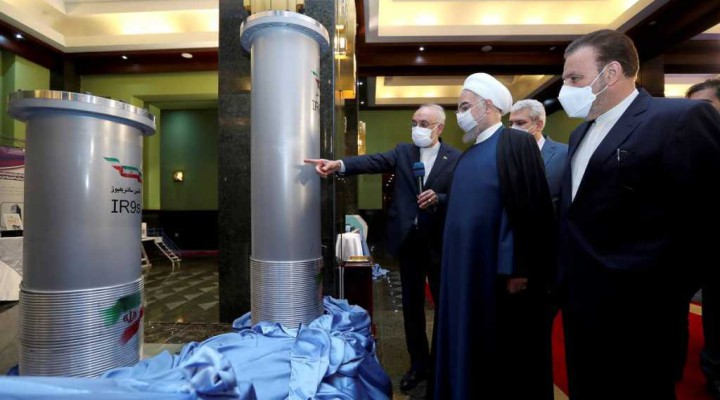 It has become apparent that the recent Israeli attacks against several Iranian targets aim to boost Israeli Prime Minister Benjamin Netanyahu’s domestic position in this critical electoral moment. Israel is struggling to have a united government after four failed attempts. Moreover, Israel is telling the World how upset it is from the US-Iran rapprochement that is giving Tehran the upper hand and that Washington accepts to negotiate on Iran’s terms, notwithstanding the outcome of the nuclear talks in Vienna between the signatories of the “Joint Comprehensive Plan of Action” (JCPOA), known as the nuclear deal. The US administration, led by President Joe Biden, took an official distance from Israel’s act of sabotage without necessarily avoiding capitalising on the Israeli attack to put pressure on Iran to accept a direct negotiation.

The US is still apparently not aware that Iran stands firm on its position and has set its negotiation terms and guidelines. It is up to the West to accept it or prepare itself for a complete nuclear capability that could produce a nuclear bomb if and when it so desires. Iran has retaliated, announcing its intention to increase its enrichment Uranium to 60 per cent, improving by far its negotiation position in Vienna.

Since Joe Biden took office, Israel carried out several attacks to provoke Iran. Tel Aviv claimed that it has bombed “Iranian targets” in Syria. It has carried out a mine attack on the Iranian vessel Saviz in the Red Sea and is responsible for the sabotage at Natanz nuclear facility.

The US administration denied its involvement – but not its ignorance of the attack before it took place – of the Israeli sabotage act at Natanz. European sources believe the US denial is positive. However, it could be that Biden and his team are trying to capitalise on the Israeli attack, thinking Iran could change its mind and agree to include other Middle Eastern files to negotiate with or at least for Iran to accept a direct negotiation with the Americans. Western diplomats (wrongly) believe that Iran could ask countries involved in Vienna’s nuclear negotiation to exert pressure on Israel to halt its sabotage attacks.

“It is obvious that Iran is not willing to start a war in the Middle East when President Hassan Rouhani’s government is trying to lift all sanctions before the end of his term. The Israeli attacks could accelerate the nuclear negotiation even if Israel is unhappy about it but realises it is a critical path to stop Iran from reaching nuclear military-grade capability. Therefore, direct negotiation between the Iranian Foreign Minister Jawad Zarif and his US counterpart Antony Blinken will be necessary to accelerate the negotiation and effect a compromise sooner. However, Iran responded that it wouldn’t accept any direct negotiation unless the US lifts all sanctions. It has also turned the tables on everybody and decided to increase its enrichment to 60%, getting closer to the 90% military grade. Iran has gained the advantage now, and President Biden has no choice but to act in the coming month or two”, said the diplomatic source.

The US officials have repeatedly asked their European counterparts to try and convince Iran to accept a direct negotiation where an American envoy is involved. Iran was adamantly firm on its position, rejecting any meeting unless all 1650 US sanctions are lifted, and that banks, countries and institutions are allowed to deal with Iran and unfreeze its financial assets without fear of US repercussions. Western leaders’ western objective to open a bazaar-like negotiation with Iran indicates how little the Iranian position is understood. The Iranian negotiators are undoubtedly skilful. Moreover, there is a clear-cut decision stated by the Leader of the revolution Sayyed Ali Khamenei who told Zarif clearly: “Go and negotiate only on the nuclear dossier and nothing else”. Former US Secretary of State John Kerry has already tried to persuade Zarif to negotiate on other dossiers of concern to no avail. Former President Donald Trump waited for a couple of years next to his phone for Iran’s call that never came.

There is little doubt that the US sanctions on Iran were – and still are – very painful for the Iranian economy. However, these sanctions forced Iran to become more independent than ever. When released, the several hundreds of billions of dollars held by many countries around the world will boost Iran’s wealth and economy and consolidate its position as a regional power in the Middle East that enjoys strategic ramifications and a relationship with China and Russia.

Both the US and Israel are aware of the consequences of returning the Iranian assets with the interests accrued (that point is still debatable). This is one of the main reasons why the Israeli Prime Minister behaves like the “bully of the Middle East”, serving the US administration’s purposes in one way or another.

Iranian sources believe that “Biden could also be using Netanyahu’s acts of sabotage and war provocations to show to the US warmongers that Iran is unwilling to go to war regardless of all the Israeli provocations. None the less, the US administration is fully aware that Iran has become a regional power while under the harshest sanctions ever and has managed to stop the US plans to destabilise Syria, divide Iraq, dominate Yemen and cripple Lebanon.So far, Israel has failed to drag Iran into a war dictated by the Israeli Prime Minister in its time and place.”

Iran has not hesitated to show its teeth when its vessels are attacked in the Strait of Hormuz and the Red Sea. The recent attack against the Israeli ship in front of the United Arab Emirates took place while the US naval force is in the same region. Although Iran denied its responsibility, officials believe the US-Russia tension around Ukraine won’t allow Biden to start a new war with Iran to force it to stand down and decrease its Uranium enrichment. The decision to go for 60% came from the leader Sayyed Ali Khamenei, and it won’t be revoked regardless of western pressure unless the US lifts all harsh sanctions imposed on Iran.

Europe has joined Israel in putting pressure on Iran by imposing travel bans and asset freeze on several Iranian individuals over “human rights” violation. The EU sanctions are symbolic when they target Hossein Salami, the head of the Iranian Revolutionary Guard Corps, and Gholamreza Soleimani, the head of the Basij. Both commanders will never travel to the West or have bank accounts in foreign banks. Iran responded by suspending comprehensive talks with the EU in the area of human rights, terrorism, drugs and refugees. The EU institution is heavily politicised and responds to the US diktat, particularly when imposing sanctions on Iran and Russia, China, Libya, Sudan and Eritrea, yet never on Saudi Arabia and its long list of crimes against humanity in Yemen.

It is difficult not to create a link between the EU sanctions on Iran, the Israeli sabotage attacks and the Vienna negotiations. The US administration seems to be trying different tools and avenues to put pressure on Iran that, notwithstanding its need for revenge, is steady inprioritising the nuclear talks and lifting all sanctions. That doesn’t mean the promise of revenge has been disregarded. On the contrary, Iran is aware that Israel will continue targeting more Iranian objectives if deterrence is not swiftly imposed. It is a good reminder to consider that Iran has different ways of responding directly or through its allies and various theatres. Iran doesn’t necessarily limit itself to responding when and in the same way and place that Israel wants or expects. Indeed, the latest news reported an unknown attack against an Israeli ship, indicating strongly that tit-for-tat deterrencehas been established, embarrassing Prime Minister Netanyahu.

Last month, an Israeli ship was hit by a small missile, probably fired from a drone, while navigating between India and Oman. In February, an Israeli-owned cargo vessel MV Helios Ray was damaged off the Gulf of Oman. Iran denied responsibility.

Domestically, the Israeli Prime Minister is fighting for his political future, accused of accepting improper gifts and misusing his office to advance his personal political interests. Netanyahu is also facing another governmental dilemma, unable to obtain a 61-seat majority to form a government for the fourth time in a divided parliament. Externally, Netanyahu is panicking while watching the US administration return to the nuclear deal with Iran. He certainly misses Donald Trump, who supported Israel with no limits and gave Netanyahu anything he wanted. Israel would not want to see Iran having nuclear military capability and would like to remain the sole holder of its hundreds of nuclear warheads in the entire Middle East.

Israel enjoys the intelligence, military and media support of most countries worldwide, mainly in the West and most Gulf countries. It has facilities no other country in the world enjoys, and all its sabotage operations – unlike the one against Iran – are covered up and concealed.

However, Israel realised that its over 1,000 claimed attacks on Iranian targets, the failed partition of Syria and Iraq and the war on Yemen were all objectives impossible to achieve even though Iran was under the harshest sanctions ever. These failures are all due to Iran’s main and robust support to its allies that prevented not only Israel but also the international community (the West and Gulf countries) from gaining the upper hand against the largest coalition gathered in the Middle East during these last decades.

Iran doesn’t have the upper hand in Syria to retaliate against the continuous Israeli violation of Syrian sovereignty. However, in the Straits of Hormuz and the Red Sea, Iran feels “at home”. Throughout the last two decades, Iran has not been provoked into a confrontation until the US assassinated the Iranian brigadier general Qassem Soleimani while on a diplomatic mission to Baghdad, Iraq. Tehran continued its path in consolidating its alliances in the Middle East and Latin America (Venezuela). Moreover, Iran has manufactured itself most of its needed military weapons, especially its armed drones and precision missiles, and it has effectively delivered what its allies needed to protect themselves from Israeli and US dominance.

Iran has responded to the US sanctions and the Israeli sabotage attacks, and the Iranian scientist’s assassination by intensifying its enrichment of Uranium and building centrifuges. It has begun enriching Uranium faster with its newest advanced nuclear centrifuge IR-9, has reached the level of 20% purity, announced it is starting the enrichment to 60% level and is heading towards a 90% if no deal is reached.

However, Iran did keep the door open for Biden to restore confidence and rebuild the bridge that Donald Trump had sabotaged. The ball is now in the US administration’s court: either return to the JCPOA unconditionally or watch Iran reach total nuclear production and capability. If the latter is the US’s choice, it should be ready to face a much stronger Iran when the atomic process reaches, as it inevitably will, an irreversible point of no return.

0 thoughts on “Israel is begging for war: Iran accelerates the path towards advanced nuclear capabilities”