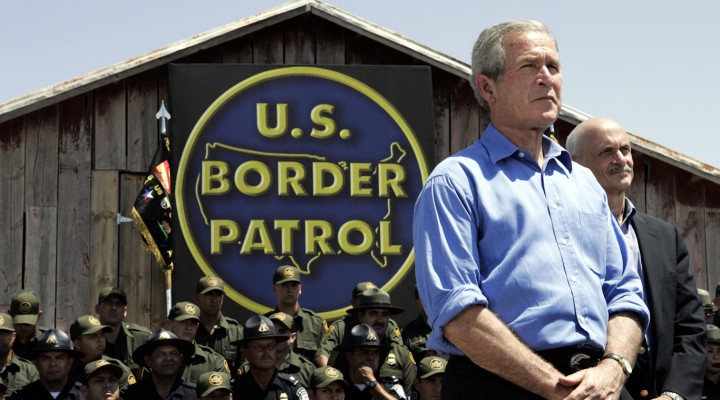 George W. Bush drastically increased the militarization of the Mexican border, sending 6,000 national guardsmen to patrol it, greatly increasing detention capacity for immigrants and using drones to patrol the area.

MPN– George W. Bush, the 43rd president of the United States, has announced he is releasing a new book called “Out of Many, One” which will celebrate America’s diversity and immigrant populations. “Our immigrant heritage has enriched America’s history. It continues to shape our society. Each generation of Americans — of immigrants — brings a renewal to our national character and adds vitality to our culture. Newcomers have a special way of appreciating the opportunities of America, and when they seize those opportunities, our whole nation benefits,” the former president said.

The book, scheduled for release in March 2021 will feature 43 images of immigrants, painted by Bush himself, and will retail at $38, although avid fans will be able to purchase an oversized deluxe signed edition for $250. “While I recognize that immigration can be an emotional issue, I reject the premise that it is a partisan issue. It is perhaps the most American of issues, and it should be one that unites us,” he said in a press release. “My hope is that this book will help focus our collective attention on the positive impacts that immigrants are making on our country.”

Man this George Bush rebranding is amazing. It's almost like he wasn't the Donald Trump of his days https://t.co/aAucRzDJeA

With immigration becoming an increasingly hot partisan issue, the move celebrating the practice is the latest in a series of actions that Bush has taken to distance himself from the current Republican president. Both Bush and his father claimed they did not vote for Trump in 2016, leading to delight from many Democrats. Speaker of the House Nancy Pelosi, for example, yearned for a by-gone age, admitting to wishing Bush were still president, even though at the time she described him as a “total failure” in every aspect of governing. So complete was the rehabilitation of the figurehead of the Iraq and Afghanistan wars that he was embraced and praised by liberal talk show host Ellen DeGeneres.

Yet those with long memories will remember that, despite claiming to love immigrants, both the Department of Homeland Security (DHS) and Immigration and Customs Enforcement (ICE) were created under his auspices. The DHS, often described as the United States’ “new standing army,” has been at the forefront of crushing protests against racist police brutality in Portland, with anonymous, masked and armed agents abducting individuals off the street, throwing them into unmarked vehicles. The DHS’s actions have been condemned by Democrats representing Portland at the local, state, and national levels. The department’s chief Ken Cuccinelli has tried to justify his agents’ presence by pointing to “weapons” like shields and gas masks confiscated at protests.

Meanwhile, at the beginning of the pandemic, ICE launched a huge drive to “flood the streets” of sanctuary cities with officers to arrest as many undocumented immigrants as possible. “I have gotten frantic texts from people that they are spotting ICE in their New York City buildings knocking on doors. They are terrified. This is happening today. Right now. People [are] being hunted down,” wrote journalist Maria Hinojosa in March.

After the militarization of the U.S.-Mexico border that began after the North American Free Trade Agreement decimated the Mexican working-class, ICE became the main weapon used to pacify the immigrant population, lest they or their loved ones be taken away to one of many detention camps the group operates. In April, it was reported that ICE was knowingly deporting COVID-19 positive detainees to countries that could not deal with the influx.

The Bush administration also drastically increased the militarization of the Mexican border. Between 2001 and 2007 border security funding more than doubled from $4.6 billion to $10.4 billion, with the number of Border Patrol agents employed also doubling during his time in office, also sending 6,000 national guardsmen to the southern border.

Bush bragged about greatly increasing the U.S.’ detention capacity for immigrants, using drones to patrol the area, and building 700 hundred miles of fencing and wall, which served as a stepping stone to Trump’s border plans. The increasingly militarized border mirrored the increasingly hostile rhetoric towards immigrants that dominated the Republican Party today.

Bush is no stranger to covering controversial topics in his art. In 2017, he released a similar bestselling book called “Portraits of Courage: A Commander in Chief’s Tribute to America’s Warriors.” In it, he painted dozens of fallen American servicemen, all of whom died fighting in wars he started under false pretenses and has expressed no remorse for doing so. Neither Bush nor the great number of outlets who praised the book appeared at all interested in Middle Eastern victims of his policy. Now, as then, it appears few see the irony of a former commander-in-chief extolling the virtues he helped take away from so many.

The REAL “terrorists” – death is not a laughing matter, murder is a crime.

The Problem With Wikipedia and the Digital Revolution