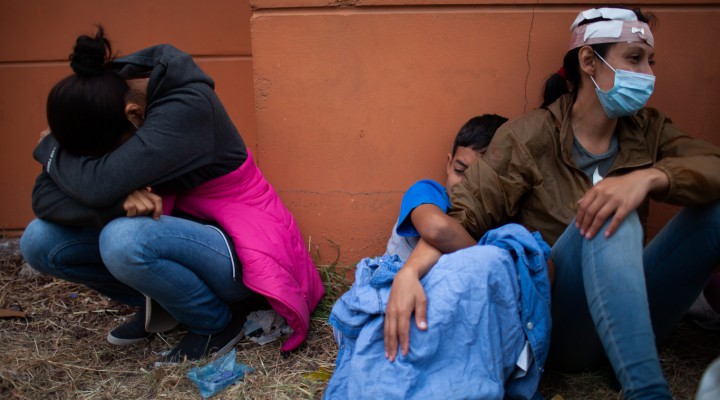 The lack of critical coverage of Biden’s new announcement suggests that corporate media will no longer be as concerned about “kids in cages” now their preferred candidate is in the White House.

MPN- The Biden administration is opening a new child prison along the United States-Mexico border. The center, located in Carrizo Springs, around 100 miles southwest of San Antonio, is being specifically built for unaccompanied migrant children attempting to cross the border and will hold around 700 people when finished, although plans noted it will be expanded if the government deems it necessary.

But corporate media do not see it that way. While the Trump years were filled with stories about “kids in cages” and ICE “concentration camps” along the border, they have instead almost universally referred to the new project as an “overflow facility” to help migrant children, as the following headlines demonstrate: “Overflow facility” is a distinctly pleasantly sounding term for such an establishment, suggesting links to positively-charged services like swimming pools or libraries. The phrase is a completely new way to refer to prisons; a news search for “overflow facility” pre-January 2021 brings up only stories about COVID overflow clinics or emergency sewage treatment works.

The phrase “concentration camp” to describe the structure was completely absent. Searching for “Biden concentration camp” into news databases is more likely to generate stories about the plight of Uyghurs in Western China rather than domestic affairs.

Perhaps the worst offender, however, was Fox News, whose headline informed readers: “Biden administration to open overflow shelter for migrant children in Texas” — a framing that invites the audience to see the move as a humanitarian gesture, along the lines of rape crisis shelters. None of the children who will be sent there will go of their own free will and it is doubtful whether many will appreciate the “shelter” that the U.S. government will provide them.

Over much of the past three years, corporate media have been comparing the detention centers on the border to concentration camps, if not directly labeling them as such (e.g. CNN, Esquire, Washington Post). Data from Google Trends shows that phrases like “ICE concentration camp” were barely used until 2018, the term exploding into public consciousness a year later, especially after prominent Democrats like Alexandria Ocasio-Cortez began using it.

President Biden has promised to rein in many of the worst excesses of ICE policy, yet the organization’s role in society will not fundamentally change. Indeed, during the time he was vice-president (2009-2017), President Obama deported well over 2.5 million people through immigration orders, more than any other president in American history, earning him the moniker “Deporter-in-Chief” from critics.

President Trump actually deported fewer migrants than Obama, although he drastically sharpened his rhetoric against them and encouraged ICE to carry out a campaign of intimidation against the population nationwide and attempting to prosecute activists who helped migrants survive the perilous desert crossing. And while Trump politicized and made the border wall a central part of his administration, hundreds of miles of the wall had already been built by previous presidents, as filmmaker Abby Martin documented.

Missing from so much of the coverage, whether pro or anti-border wall, however, is the context to why so many people are leaving Central America to go northwards in the first place. When corporate media do offer explanations, they have been relatively shallow, merely noting that they are searching for employment, fleeing discrimination, or following a dream. In reality, economic and political factors largely account for the enormous migration — many of which have their origins in decisions taken in Washington, D.C.

Free trade deals signed with developing countries, such as NAFTA, decimated local agriculture, as small scale farmers suddenly had to compete with massive, U.S. government-subsidized agribusiness, leading to a collapse in the Mexican rural economy and a huge influx of people into the country’s largest cities.

Meanwhile, the Obama administration’s decision to overthrow the government of Honduras in 2009 led to a military dictatorship, persecution on a national scale, and a mass exodus from the country. In neighboring Nicaragua, by comparison, the U.S. has tried — but failed — to remove the Sandinista government. As a result, emigration from Nicaragua has been minimal.

The lack of critical coverage of Biden’s new announcement suggests that corporate media will no longer be as concerned about “kids in cages” now their preferred candidate is in the White House. Perhaps they never cared at all.

Feature photo | An injured women, part of a Honduran migrant caravan in their bid to reach the U.S. border, weep as they sit on the side of a highway after clashing with Guatemalan police and soldiers in Vado Hondo, Jan. 17, 2021. Sandra Sebastian | AP

0 thoughts on “From Concentration Camps to Overflow Facilities: With Biden in Charge, Media Forgets Kids in Cages”