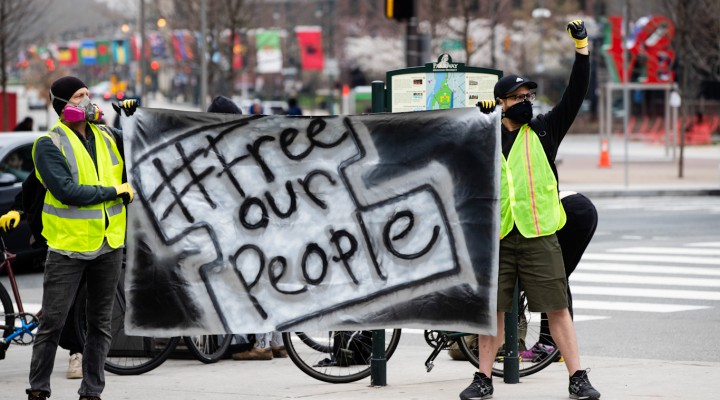 By continuing deportations of quarantined detainees during a pandemic, ICE is greatly increasing the risk of spreading the deadly virus to other countries officials and activists warn.

MPN– Woken in the middle of the night and marched out of a crowded, quarantined group cell by prison guards to be deported. That is the story of one D.C.-area man on Wednesday, inside of an ICA Farmville for-profit prison full of hundreds of undocumented immigrants detained by Immigration and Customs Enforcement (ICE). The unit is in the middle of a two-week lockdown due to a number of inmates showing symptoms of COVID-19, yet that did not stop guards bursting in and taking the man, who has not been named due to fears about retaliation, out to process his deportation, recklessly endangering others in the facility.

The prisoner’s wife, a nurse in Washington, D.C., condemned the actions. “As a nurse, I can’t believe ICE is willing to risk the safety of others by transferring somebody who is in quarantine,” she said. By continuing deportations of quarantined individuals during a pandemic, ICE is greatly increasing the risk of spreading the deadly virus that has already officially killed at least 34,522 in the United States, although the true number is certainly higher. “This is a massive public health and human rights failure, in addition to a violation of public trust,” said Gaurav Madan, a core organizer with Sanctuary DMV, a volunteer organization helping immigrants in the D.C. area.

One of the major destinations for deportees is Guatemala. On Tuesday, Guatemala’s Health Minister, Hugo Monroy, said that ICE is overwhelming it with planeloads of sick individuals, noting that 75 percent of deportees on one flight tested positive for COVID-19. Another flight on Monday even included 16 unaccompanied minors, according to the Guatemalan Immigration Institute. This suggests that the United States, rather than treating sickly detained immigrants, is forcibly dumping them in their countries of origin, leaving them to deal with the problem. The Guatemalan government asked the U.S. to send no more than 25 individuals per flight, but that request was initially ignored.

The unnamed man was only detained and taken to ICA Farmville two weeks ago. He arrived amid a widespread and coordinated hunger strike by inmates denouncing the facility as a deathtrap and demanding to be released amid a suspected coronavirus outbreak. ICE has so far refused to do so, claiming that no one has tested positive there. Officially, only 100 detainees nationwide have tested positive. However, as with everywhere else, testing is severely limited and authorities have already quarantined two whole dormitories at the facility, suggesting they suspect otherwise. “I’m in a panic,” said one Salvadorian detainee, “The virus is affecting everyone globally, but here in Farmville, we are panicking because we have no security. We are trying everything we can to leave, to be with our families, where we can be safe.” Inmates are housed in large, group cells where social distancing is impossible. Sanitary products like soap and disinfectant are in short supply, cellmates are forced to share bathrooms and sleep in bunk beds clustered together.

ICA Farmville opened in 2008 amidst protests from locals and has already gained a reputation for its unsanitary conditions. Last summer detainees organized a “meal strike” due to an outbreak of mumps, a classic disease of overcrowding and poor sanitation. The strike was brutally crushed by authorities and those inmates that were not suppressed are currently suing ICE over their treatment.

A number of elected Virginian delegates are pressuring ICE to release those in Farmville due to concerns over their safety. “These conditions are unacceptable and a threat to public health. In such unprecedented circumstances, we have a responsibility to take every precaution we can to preserve the health and safety of all Virginias, including those who are undocumented,” wrote Reps. Ibraheem Samirah, Elizabeth Guzman and Kaye Kory.

NEW: I've just sent a letter, co-signed by @delegateguzman and @KayeKory, to #ICAFarmville and the ICE field office in Virginia.

We're calling on those who oversee the ICA Farmville immigrant detention center to release those held inside amid a possible outbreak of COVID-19. pic.twitter.com/8sGuSvzhB3

However, it is highly unlikely that Immigration Centers of America (ICA), who run the prison, will voluntarily comply: they are making too much money. ICE pays them at least $120 per person per night – more than it would cost to house someone in a king room at the nearby Hilton Richmond Downtown. Invoices seen by MintPress News show that ICA charged the agency $2.366 million in March 2017, $2.206 million in February and $2.353 million in January for their services.

“ICA-Farmville profits off the pain of immigrant communities,” Madan added, “It is an ongoing public health crisis. The only responsible plan of action is to release everyone being held there and shut down the facility for good.”

Feature photo | Protesters call for officials to release people from jails, prisons, and immigration detention centers in response to the coronavirus, as they demonstrate outside City Hall in Philadelphia, March 30, 2020. Matt Rourke | AP