HOME / WORLD / Trump Foreign Policy as Theater of the Absurd 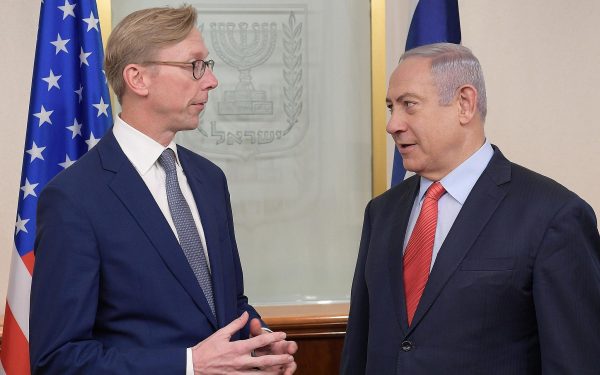 A nightmare that one never wakes up from

One might be forgiven for thinking that the foreign policy of the United States is some kind of theatrical performance, like a comic opera, with new characters appearing on stage willy-nilly and then being driven off after committing an incredible faux pas only to be replaced by even more grotesquely clownish figures. Unfortunately, while the musical chairs and plot twists contrived by a Goldoni or Moliere generally have a cheerful ending, the same cannot be said about what has been taking place in the White House.

The latest White House somewhat unexpected departure was that of ex-real estate lawyer Jason Greenblatt, who has been hanging around for over two years putting together the Deal of the Century for the Middle East. The Deal will reportedly end forever the possibility of any real Palestinian state but has run into a problem because Israel does not want its hands tied in any way while the Saudis and friends are reluctant to come up with the cash to fund the arrangement. Back to square one, though the Administration has replaced Greenblatt with thirty-year old Avi Berkowitz, whose only qualification for the position is that he is a friend of presidential son-in-law Jared Kushner and whose most recent job at the White House consisted of managing “daily logistics like getting coffee…” The president is nevertheless still insisting that the peace plan will be revealed in all its glory after the Israeli election on September 17th.

Another administration notable who now appears to be waiting for the hook to come out from offstage and take him away is National Security Adviser John Bolton. Bolton has long been regarded by those who still believe that Donald Trump actually has a heart and a mind as the eminence grise seated behind the throne who has encouraged the president’s bad angels. That may indeed be so, but leaks are now suggesting that the president has been disagreeing with his chief minister and marginalizing his presence in meetings. But as bad as Bolton truly is, one should not dismiss from consideration Secretary of State Mike Pompeo and Vice President Mike Pence, both of whom, like Bolton, have exhibited extraordinary ability to provide bad advice and to simultaneously say and do stupid things.

Pence’s recent error plagued trip to Ireland left one exasperated Irish journalist complaining that it was as if the Vice President had been invited to someone’s home and had “shat on the new carpet in the spare room, the one you bought specially for him” before his departure. Pence had unwisely made comments about Brexit that were both uninformed and regarded as “humiliating” by his hosts. But his real crime was that he blamed his boss for the ridiculous decision to stay at a Trump property 180 miles away from Dublin. President Trump denied the claim and, as he does not like being embarrassed by his subordinates, there is already talk that Pence will be replaced on the Republican ticket in 2020. Unfortunately, Attila the Hun is no longer available but it is certain that the GOP will be able to come up with someone else who will, like Pence, offend almost everyone. Tom Cotton maybe? Nikki Haley?

Now that North Korea is not cooperating with Trump’s distinctive brand of diplomacy, the Great Negotiator has turned to America (and Israel’s) enemy number one, suggesting a sit down with Iranian President Hassan Rouhani. The only problem with that is that Rouhani is not playing because the United States has been engaged in nothing less than “maximum pressure” economic warfare against his country. End the sanctions and Rouhani would consider talking directly.

Israel, of course, is deeply concerned lest American and Iranian heads of government actually get together to discuss things. According to some observers, Prime Minister Benjamin Netanyahu is believed to be somewhat nervous over that possibility and wants to get a hotter war going in the region to disrupt any consideration of entente between Tehran and Washington. That is why the Israelis have been escalating their attacks against claimed “Iranian targets” in Syria, Iraq and Lebanon, an initiative intended to provoke an Iranian reaction which will then be escalated by Netanyahu to draw Washington in supporting Israel while also putting an end to any consideration of top-level talks.

As a side show to the deep thinking going on in the White House, there is the Iranian tanker saga. One might recall that the tanker Adrian Darya 1, which claimed to be registered in Panama while carrying alleged Iranian oil allegedly bound for Syria, was halted in Gibraltar by the British at the request of the American State Department even though it was in international waters at the time. The U.S. has been sanctioning nearly everything having to do with Iran, to include its export of oil, and is also enforcing sanctions imposed on the government in Syria. Pompeo claimed, in fact, that he had “reliable information” the ship was transporting oil to Syria in defiance of wide-ranging U.S. and European Union initiated sanctions directed against the regime of Syrian President Bashar al-Assad over false claims that it had been using chemical weapons. The Treasury Department added that the vessel was “blocked property” under an anti-terrorist order, and “anyone providing support to the Adrian Darya 1 risks being sanctioned.”

After six weeks detention, the British released the tanker on August 18th when a Gibraltar judge ruled that there were no grounds for seizing it in the first place, adding that it could not be turned over to Washington. Since that time, it has been making its way across the Mediterranean headed for ports unknown. It is, inevitably, being stalked by the United States Navy, which may or may not attempt to take control of it before it heads to shore in Lebanon or Syria.

The entire situation is farcical, but here is where the fun comes in: Brian Hook, a true Trumpean know-nothing who somehow has been designated U.S. Grand Poobah for Iran, sent an email on August 26th to the ship’s Indian captain Akhilesh Kumar. The message said “This is Brian Hook . . . I work for secretary of state Mike Pompeo… I am writing with good news.”

The “good news” consisted of an offer to give Captain Kumar millions of dollars if he would sail the Adrian Darya 1 to a port that would impound the ship for the U.S. Kumar did not respond to the offer to turn pirate and steal the vessel, so “Captain” Hook dropped the hammer in a second email, writing that: “With this money you can have any life you wish and be well-off in old age. If you choose not to take this easy path, life will be much harder for you.”

The sublimely ridiculous proposal to Kumar comes on top of a similar appeal from the Department of State, which last week offered rewards of up to $15 million for information that would enable the disruption of the financial mechanisms used by Iran’s Islamic Revolutionary Guards Corps (IRGC). State, acting through its humorously named “Rewards for Justice” program, will pay money for any information regarding the revenue sources of the IRGC, which was listed as a foreign terrorist organization in April.

The State Department announced the rewards at a briefing late last Wednesday morning, with Brian Hook saying that “The IRGC trains, funds, and equips proxy organizations across the Middle East. Iran wants these groups to extend the borders of the regime’s revolution and sow chaos and sectarian violence. We are using every available diplomatic and economic tool to disrupt these operations.”

Having experienced schemes involving paying rewards for information while I was overseas with the CIA, I can with considerable confidence predict that the U.S. Embassies in Turkey and Dubai will be flooded with desperate Iranians peddling what stories they have made up in exchange for money or visas. The actual information obtained will be approaching zero.

The American beneficence towards the Middle East currently also includes, apparently, intervening yet again in Syria to prevent the Syrian Army and its Iranian and Russian allies from eliminating the last major terrorist pocket in the country’s Idlib province. Fact is, it is the United States being led by the nose by Israel that has both supported terrorists and created most of the unrest and violence in the Middle East, central Asia and North Africa.

Additionally, also last week, the Treasury Department’s Office for Terrorism and Financial Intelligence headed by Under Secretary Sigal Mandelker, an Israeli, sanctioned more than two-dozen entities and individuals as well as 11 ships allegedly supporting IRGC oil shipments going to Bashar al-Assad’s Syria and other “illicit actors.” One has to wonder if the Treasury’s Office “for Terrorism” might actually be “for Terrorism” as long as it is carried out by the U.S. and its “best friend and closest ally” in the Middle East.

All in all, one hell of a week. A Greenblatt gone replaced by a Berkowitz, possibly Bolton and Pence going, piracy on the high seas, cash for info schemes, and lots more sanctions. Can’t get much more exciting than that, but let’s wait for next week to see what Donald Trump will give his good buddy Benjamin Netanyahu as a pre-electoral gift. Rumor has it that it will include American recognition of Israel’s right to annex most of the rest of the West Bank plus security guarantees that the U.S. will have the Jewish state’s back no matter what it seeks to do with its neighbors. Stay tuned!

0 thoughts on “Trump Foreign Policy as Theater of the Absurd”