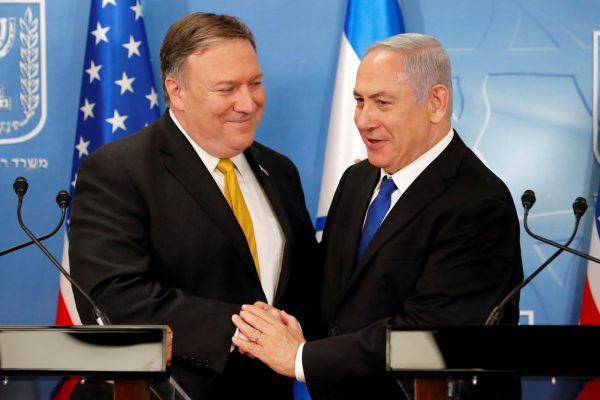 Escalating could be intended to involve the United States

Two years ago I wrote an article entitled “America’s Jews Are Driving America’s Wars.” Though I made clear in the piece that I was writing about specific, identifiable Jews who fund and staff the think-tanks and foundations that make up the Israel Lobby, I was immediately fired by the Editor of The American Conservative (TAC) magazine and website, a timid little man who had been trying to get rid of me for some time. He evidently wished to do so because I did not share his “restraint” in my allusions to Jewish power in the United States and was particularly incensed over my suggestion that when Zionist propagandists like Bill Kristol appear on television the network should be required to display a warning label under the picture advising that Kristol was toxic.

As I had been writing for TAC for fifteen years and had been regarded as very popular among the magazine’s supporters, my dismissal was noted by many. I therefore followed up with a second article entitled “How I got fired,” which, inter alia, noted that Pat Buchanan, the TAC co-founder, had pretty much written the same thing that I did back in 2003 in a famous essay entitled “Whose War?”, though he had definitely been more polite than I was.

Pat Buchanan continues to be one of the few publicly visible political analysts currently active who dares to tell it like it is when it comes to Israel’s power in America. His article last week “Will Israel’s War Become America’s War” as always gets to the heart of the problem, i.e. that the completely contrived “special relationship” with Israel could easily lead the United States into another totally unnecessary war or even a series of wars in the Middle East.

Pat starts with “President Donald Trump, who canceled a missile strike on Iran after the shoot-down of a U.S. Predator drone to avoid killing Iranians, may not want a war. But the same cannot be said of Bibi Netanyahu.” He observes that Israeli Prime Minister Netanyahu is facing re-election on September 17th, and though most polls indicate that he will win, the opposition to him is strong based on his personal corruption and his pandering to the country’s most extreme right-wing parties. So Bibi is concerned that he might lose and even go to jail and there is nothing like a little war to make a leader look strong and righteous, so he is lashing out at all his neighbors in hopes that one or more of them will be drawn into what would be for Israel, given its massive military superiority, a manageable confrontation.

Buchanan sums up Netanyahu’s recent escalation, writing that on “Saturday, Israel launched a night attack on a village south of Damascus to abort what Israel claims was a plot by Iran’s Revolutionary Guards’ Quds Force… Sunday, two Israeli drones crashed outside the media offices of Hezbollah in Beirut. Israel then attacked a base camp of the Popular Front for the Liberation of Palestine-General Command in north Lebanon. Monday, Israel admitted to a strike on Iranian-backed militias of the Popular Mobilization Forces in Iraq. And Israel does not deny responsibility for last month’s attacks on munitions dumps and bases of pro-Iran militias [also] in Iraq. Israel has also confirmed that, during Syria’s civil war, it conducted hundreds of strikes against pro-Iranian militias and ammunition depots to prevent the transfer of missiles to Hezbollah in Lebanon.”

So, Israel has staged literally hundreds of attacks against targets in Lebanon, Syria and now Iraq while it is also at the same time shooting scores of unarmed demonstrators inside Gaza every Friday. Netanyahu has also threatened both perennial foe Iran and the Houthi rebels in Yemen. As the Jewish state is not at war with any of those countries it is engaging in war crimes. Both Hezbollah in Lebanon and the Iranian Revolutionary Guard Force are vowing revenge.

Pat Buchanan goes on to make the case that Netanyahu is willy-nilly pulling the United States into a situation from which there is no exit. Indeed, one might well conclude that the trap has already been sprung as the Trump Administration is reflexively blaming Israel’s actions on Iran. The Jewish state’s escalation produced a telephone call to Bibi by American Secretary of State Mike Pompeo promising that the United States would unconditionally support Israel. Vice President Mike Pence also joined in, boasting of a “great conversation” with Netanyahu and tweeting that “The United State fully supports Israel’s right to defend itself from imminent threats. Under President @realDonaldTrump, America will always stand with Israel!”

So, if a war in the Middle East does begin one can count on a number of developments in Washington, all of which favor Netanyahu. As Pompeo and Pence have made clear, the Trump Administration already accepts that whatever Israel does is fully justified and there are even reports that the White House will endorse Israeli annexation of all the illegal settlements on the West Bank at some point either before or immediately after the upcoming Knesset election to help Bibi. And don’t look for any dissent from even the most extreme views developing inside the White House or the State Department. The president has completely surrendered to the Israel Lobby while National Security Adviser John Bolton, Pence and Pompeo are all outspoken supporters of war with Iran. And nearly all the important government posts dealing with the Middle East are staffed by Jewish Zionists, to include the president’s son-in-law and two Donald Trump lawyers. The most recent addition to that sorry line-up is Peter Berkowitz, who has been appointed head of the Policy Planning Staff at State. Berkowitz studied at the Hebrew University in Jerusalem and is co-founder and director of the “Israel Program on Constitutional Government.”

And Congress would also be singing the “amen” chorus in support of U.S. intervention to help the country it has ridiculously but nevertheless repeatedly described as America’s “best friend and closest ally.” The occupied mainstream media would echo that line, as would the millions of Christian Zionists and every one of the more than 600 American Jewish organizations that in one way, shape or form support Israel.

Buchanan warns that the U.S. could find itself in real trouble, particularly given the attacks on Iraq, where Washington still has 5,000 troops, hugely outnumbered by the local pro-Iranian militias. And American aircraft carriers could find themselves vulnerable if they dare to enter the Straits of Hormuz or Persian Gulf, where they would be in range of the Iranian batteries of anti-ship missiles. He concludes that a war for Israel that goes badly could cost Trump the election in 2020, asking “…have we ceded to Netanyahu something no nation should ever cede to another, even an ally: the right to take our country into a war of their choosing but not of ours?”

0 thoughts on “Israel’s Many Wars”