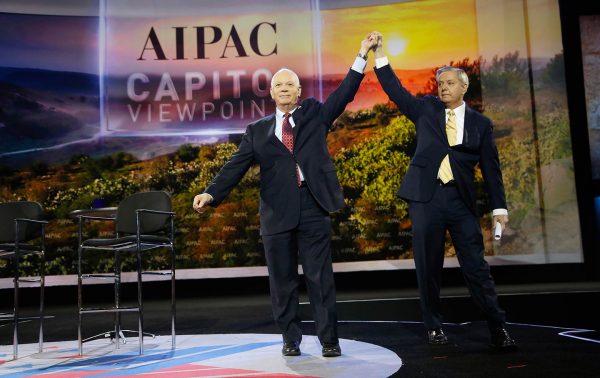 Congress is in Israel’s pocket

Once upon a time the Israel Lobby destroyed critics of the Jewish state and its behavior by stealth. If a Congressman or Senator were speaking honestly about the lopsided relationship with Israel which required suppressing, it was done by making sure that individual was not reelected. This was normally accomplished by vetting an attractive opposition primary candidate who would do Israel’s bidding, funding him or her generously and providing unfavorable press coverage of the incumbent.

One great victory for Israel using that technique was the 1992 defeat of George H. W. Bush by Bill Clinton. Bush had dared to withhold guarantees on loans sought to fund Israel’s expansion of its settlements, clearly a genuine American interest as the settlements were a violation of international law. Going into the election, he appeared to be the much stronger candidate, but then the captive media starting to write about how the economy was in bad shape, which was not true, and switched over to deeply negative coverage of his campaign. The Lobby also heavily contributed financially to the Clinton campaign. George H.W. subsequently privately blamed the Israel Lobby for his defeat, a lesson his son George W. clearly absorbed in that he took pains to never anger Israel. He went rather the other way, surrounding himself with Jewish neocons as his national security policy team, which in turn produced Afghanistan and, quite plausibly, was the driving force behind the catastrophic attack on Iraq.

Legislators who have been dethroned by Israel using the same technique are Senators Chuck Percy and William Fulbright as well as congressmen Paul Findley, Pete McCloskey, Cynthia McKinney and James Traficant. They all faced credible, well-funded opponents and lost their seats. And the Israel Lobby, behind it all, never even had to complain about their views on Israel. In fact, it was believed to be better to not raise that issue directly.

Well, with great power frequently comes what the Greeks called hubris, and Israel has undoubtedly the most powerful foreign policy lobby in Washington. And that power is unique in that it also extends to many states and even local jurisdictions. As Lord Acton put it, “All power corrupts and absolute power corrupts absolutely,” meaning inter alia that the power wielded by Israel has corrupted our entire political system. What Israel wants, Israel gets, as became clear two weeks ago in the near unanimous vote for $1 billion dollars in extra Iron Dome expenses by the US Congress.

The critical difference is that now the Israelis have become so disdainful of their United States benefactor that the gloves are off when it comes to making their demands clear and insisting on positive responses. Those who do not go along are no longer brought down in semi-clandestine fashion. They are instead openly and explicitly denounced as anti-Semites and holocaust-deniers. Anti-Semitism has become the hot wire in American political discourse. Or, as one of Israel’s many proxies in Congress, House Majority Leader Steny Hoyer put it, all who support the “American way” cherish the relationship with “the Democratic state of Israel.” Surely there is a double entendre in the use of “democratic,” though Hoyer, who was acting on a demand made by Israeli Foreign Minister Yair Lapid, appears to have somehow confused democracy with apartheid.

The Israel Lobby has for several years now been vexed by the group of recently elected congressional progressives who have not been particularly shy about criticizing the Jewish state, though they have frequently had to backtrack of statements under intense pressure from the party leadership. The pushback from other Congressmen and from the media frequently accuses them of being flat out anti-Semites or often inclined to use anti-Semitic “tropes.” A favorite point of attack is to deny that Jewish groups and billionaires use money to advance their political objectives, prominently among which is uncritical support of Israel.

Congresswoman Ilhan Omar notoriously once responded to a question raised by journalist Glen Greenwald, who had posted his observation that “It’s stunning how much time US political leaders spend defending a foreign nation even if it means attacking free speech rights of Americans.” Omar tweeted in a curt response to Greenwald: “It’s all about the Benjamins baby.” Benjamins means one-hundred-dollar bills, which bear the image of Founding Father Benjamin Franklin. The entire Democratic Party leadership and every media pundit immediately voiced outrage at the antisemitic “trope.” Apparently, linking Jewish groups and money as part of America’s political corruption, which even the casual observer can hardly miss, had been elevated to something like a hate crime within the Democratic Party.

Sometimes the pressure is more subtle in the old-fashioned way. In the voting two weeks ago on Iron Dome one progressive Congresswoman Alexandria Ocasio Cortez surprisingly voted “present” instead of “no.” It turns out that her own party is preparing to gerrymander her congressional district to put more Jewish voters in it and hopefully remove her by running a well-funded candidate against her. One might suggest that she put ambition ahead of ethical behavior in her voting, but as the Lobby is out to get her one tiny gesture will hardly prove to be her salvation.

Only one Republican voted against the Iron Dome money, Representative Thomas Massie of Kentucky. He pointed out that most foreign aid comes down to the effectiveness of the foreign influence exerted on US politicians at home. It is a perfect pithy explanation of how the Israel Lobby operates. For his pains, Massie is being subjected to the hardball treatment. The American Israel Political Action Committee (AIPAC), which is the most active player in the Lobby, published a Facebook ad that included a picture of Massie and a text stating “Efforts to cut, add conditions, or restrict America’s strong, bipartisan commitment to Israel will only harm America’s national interests.” A caption claimed that “when Israel faced rocket attacks, Tom Massie voted against Iron Dome.” The ad attracted numerous comments asserting that Massie is an anti-Semite.

Massie opposed nearly all foreign aid based on principle, saying that “My position of ‘no foreign aid’ might sound extreme to some, but I think it’s extreme to bankrupt our country and put future generations of Americans in hock to our debtors.” He responded to the AIPAC ad with “How is THIS not foreign interference in our elections?” and AIPAC answered Massie’s tweet with one of its own, saying it “will not be deterred in any way by ill-informed and illegitimate attacks on this important work. We are proud that we are engaged in the democratic process to strengthen the US-Israel relationship. Our bipartisan efforts are reflective of American values and interests.”

The Anti-Defamation League (ADL) is also hunting Republicans who are not toeing the line. It has focused on Tucker Carlson in particular. It has demanded that Fox News fire Tucker for promoting the “great replacement” theory as well as other white-nationalist talking points. “To use his platform as a megaphone to spread the toxic, antisemitic, and xenophobic ‘great replacement theory’ is a repugnant and dangerous abuse of his platform,” said ADL CEO Jonathan Greenblatt. Under-fire Republican Representative Matt Gaetz also became involved in the argument, saying that Tucker Carlson is correct about white nationalist ‘replacement’ conspiracy theory and called he called the ADL racist.

AIPAC has also been active in denigrating the progressive Democrats of the so-called “Squad.” In August, Congresswoman Ilhan Omar accused the pro-Israel lobby of deliberately putting herself at risk with an ad campaign that featured her photo and was headlined, “Stand with America. Stand against Terrorists.” The ad included: “For Ilhan Omar, there is no difference between America and the Taliban; between Israel and Hamas; between democracies and terrorists; tell Rep. Omar: Condemn terrorists, not America.”

Israel’s ability to influence developments in the US is such that it also believes itself to be empowered to interfere in American education, promoting mandatory holocaust courses at all levels and stifling any serious study of what is going on in the Middle East. In August, Israeli Consul General to the Southeastern United States Anat Sultan-Dadon demanded a meeting with a dean at the University of North Carolina at Chapel Hill to discuss a graduate student teaching a course on the Israeli-Palestinian conflict. The Israeli claimed the PhD student Kylie Broderick was an anti-Semite and said she was unfit to teach the course.

The intervention by an Israeli government official came after a pressure campaign by right-wing pro-Israel websites and advocacy groups to remove the student from teaching a history department course called “The Conflict Over Israel/Palestine.” Now, Ted Budd, a Congressional Representative from North Carolina has joined the fray, including writing a letter to the president of UNC:

“President Hans: I write to express my concern over repeated antisemitic activity at the University of North Carolina at Chapel Hill (UNC). Kylie Broderick, a graduate student, is scheduled to teach a course titled ‘The Conflict over Israel/Palestine.’ Ms Broderick has a troubling history of public antisemitic statements. In her public tweets she has lamented how hard it is for her to pretend that there are two sides to the Israeli-Palestinian conflict in the classroom, noting that ‘there is only 1 legitimate side ­– the oppressed – versus imperialist propaganda. I don’t ever want to encourage them to believe there is reason to take on good faith the oppressive ideologies of American and Western imperialism, Zionists, & autocrats.’ Among other things, she has also falsely and unapologetically accused Israel of ethnic cleansing and denied Israel’s right to exist.”

Other pro-Israel groups have joined in, even claiming that Broderick was engaging activity that is illegal under both local and federal law! Indeed, one might suggest that what Israel and its friends are seeking is a world in which even thinking about the war crimes and crimes against humanity committed by the Jewish state will be strictly illegal. The Ukraine, which has been heavily Israel-ized since its pro-Russian government was removed through US interference in 2014, has, in fact, just passed a law banning anti-Semitic sentiment. Sentiment means what is inside one’s head. In other European countries anti-Semitic acts, which include criticism of Israel and expressions disparaging Jews, are illegal, but this is a first step to criminalize anti-Israeli or anti-Semitic thoughts. Could something similar be coming to the United States? Judging from the resistance that an occupied Congress is likely to put up, which is zero, it is more than likely that we will be heading in the same direction.

Is Poverty a U.S. Policy Choice? And Did AOC’s Dress Help or Hurt the Cause?