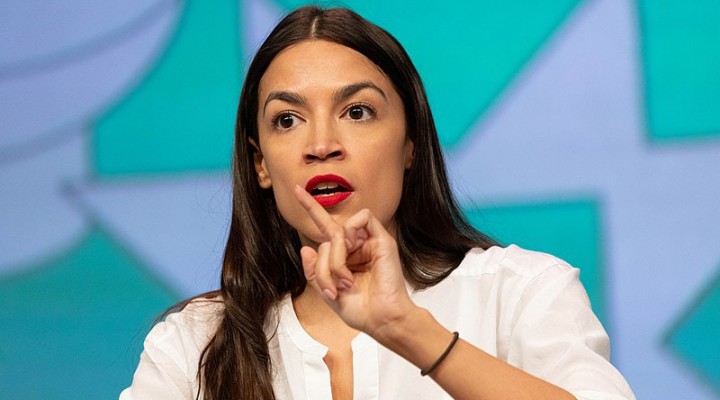 The debate rages on over whether or not House progressives should force a floor vote on Medicare for All by threatening not to re-elect Nancy Pelosi as House Speaker, with one side arguing that Alexandria Ocasio-Cortez and the rest of “The Squad” were elected to advance progressive policies so that’s what they should do, and the other side arguing that AOC is cool so shut up and leave her alone.

As we discussed yesterday, Americans will not be given Medicare for All despite overwhelming public support because an immense amount of power depends on keeping them in a state of financial struggle so they don’t interfere in the affairs of a nation which serves as the hub of a global empire. The US political system does not exist to serve the interests of Americans, it exists to serve the interests of the empire. No part of that system is there to protect the people from the powerful; it’s there to protect the powerful from the people.

Why They're Denying You Healthcare And Financial Support During A Pandemic

"If wealth were more evenly distributed in the most powerful nation on earth, there'd be no ruling class to ensure the domination of the globe-spanning empire."https://t.co/0o5YjLLgQS

There’s a misconception which spans almost the entire US political spectrum, and that is the idea that some part of the system serves the people. Progressives believe they can use the electoral process to obtain economic justice for Americans. Trumpers believe the judicial system is going to overturn Biden’s win any minute now. Liberals believed Mueller was going to drag the entire Trump camp out of the White House in chains.

And that’s just not the case. There is no part of the US political system which is anything other than innately oppositional to economic justice. There is no part of the US judicial system which would ever act to reverse widespread establishment electoral fraud. There was no part of the Special Counsel which was separate from the same unifying power structure that Trump serves to remove him from office over corruption or anything else. Ever since 2016 people have been predicting massive upheavals which radically shift power from one mainstream faction to the other, but it never happens; the imperial machine keeps chugging along with all its parts working in well-oiled harmony.

And that’s all the US governmental system exists for: ensuring the uninterrupted functioning of the imperial machine. But that doesn’t mean there’s no value in pushing for officials to do the right thing.

Yes it is true that AOC and other House progressives will probably lay low instead of doing the right thing that people are pushing them to do, and that even if they do show some spine and force a floor vote on Medicare for All it will be quashed by other politicians on Capitol Hill. Yes it is true that any and all measures which US progressives advance to bring Americans the same social safety nets afforded to everyone else in every major country on earth will be quashed by whatever means necessary to ensure the continuation of a ruling class to manage the global empire. But it is still very worthwhile to push for those things anyway.

There's a feud on the political left right now. It all started when @jimmy_dore made a video arguing that House progressives should refuse to re-elect Nancy Pelosi as House Speaker unless she puts #MedicareForAll to a floor vote. Via @caitoz. #ForceTheVotehttps://t.co/lAt0xpYGZP

You don’t push politicians to do the right thing because you think they will, you do it to show everyone else that they won’t. You get them essentially making your argument for you: Oh we can’t fight for that right now because the system is rigged to nullify our attempts to do so. And this helps spread awareness to the greater public about just how fucked things really are.

Human behavior only changes when there’s an expansion of consciousness, whether you’re talking about individuals or a collective of any size. This might sound like woo woo New Age drivel, but I promise you it isn’t. It just means that people don’t stop doing crazy and self-destructive things until they can fully perceive what’s driving it and why it’s undesirable.

Substance abuse doesn’t end until the user turns and faces the inner demons that have been driving them to use. A religion’s child molestation epidemic doesn’t end until its victims come forward and are actually listened to. Women don’t get the right to vote until awareness spreads that women are actually capable independent thinkers. A society doesn’t collectively reject racism until it collectively becomes aware of how destructive and insane it is. No matter the size or scale, the behavioral dynamics do not change until consciousness is brought into them.

This is where the real battle is being waged. Not ultimately in winning elections or obtaining committee positions, or even really in winning specific battles over policy, but in expanding consciousness. In showing more and more people more and more information about what’s actually going on above and below the surface. That’s what will lead to swift and lasting change.

This is why so much of the battle is happening on the front of propaganda, censorship, and press freedoms. The more unconscious aspects of our world want to keep things secret, distorted, and hidden in the shadows, while those who want change are fighting to turn the lights on. This is also why there’s so much value in getting a political system which doesn’t serve the people to expose itself. First and foremost the quest is to spread awareness of what’s really going on to as many people as possible; people need to become aware that they’ve been duped.

So keep spreading awareness using every tool you have available to you. Pressure the system to do what it’s supposed to be doing, and then when it doesn’t, shine a big bright light on the lock they’ve placed on the door and make a lot of noise about it so that people can see they’ve been trapped.

Things won’t change until a critical mass of people becomes aware that they are happening and how they are happening. Once this awareness has been sufficiently spread, there’s not actually anything our rulers can do to stop us from using the power of our numbers to force real change. They can’t arrest us all; they’ll run out of prison space. They can’t kill us all; they’ll have no one to rule. It’s an unwinnable fight for them, which is why they’re fighting instead to keep all the lights off using corruption, propaganda and secrecy to keep us from opening our eyes at mass scale to what they’re doing.