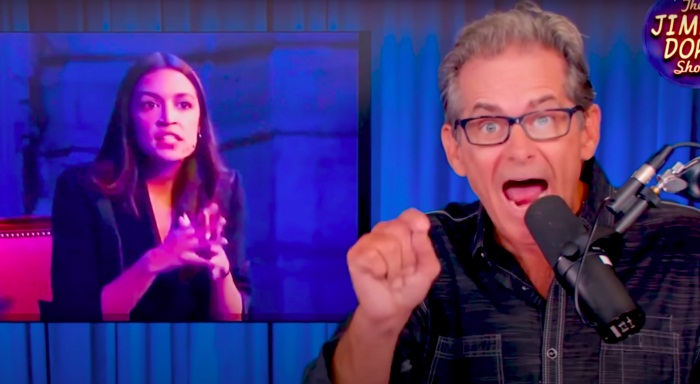 There’s a feud on the American political left right now which (as usual) breaks down more or less along the lines of center-left “Bernie in the primary, Clinton/Biden in the general” progressives angrily opposing a push towards meaningful change from those further to the left.

It all started when comedian and lefty commentator Jimmy Dore made a video arguing that House progressives should refuse to re-elect Nancy Pelosi as House Speaker unless she puts Medicare for All to a floor vote. Dore’s argument has been endorsed by many high-profile voices on the left, and it has also been attacked as self-defeating and unreasonable by many others. I won’t name names in the latter camp because I personally avoid left-infighting like it’s a crazy ex boyfriend, save to say that among them is the most prominent progressive in the House of Representatives, Alexandria Ocasio-Cortez.

If @AOC and the squad don’t do what @jimmy_dore has suggested and withhold their vote for Pelosi for speakership unless Med 4 All gets brought to the floor for a vote… they will be revealing themselves. Power concedes nothing without a demand.

One common argument against Dore is that by pushing AOC and other House progressives on this issue he is in some way demanding that they do something that will damage their political careers, the unspoken premise being that progressive politicians will be retaliated against by the Democratic establishment if they actually try to advance progressive policies. None of them ever seem too keen on discussing the massive, outrageous implications of such a situation or why it should not be fought tooth and claw by the left instead of accepted and complied with.

I haven’t seen any convincing arguments why Dore’s suggestion should not be implemented, but I have seen many strong arguments for why it should, like this one for Current Affairs by Briahna Joy Gray or this one by Rising’s Krystal Ball. The pandemic and a Democrat-controlled House presents a once-in-a-century opportunity to shove hard toward getting Americans the same healthcare rights afforded to everyone else in every major country on earth and forcing all House Democrats who oppose it to expose themselves to their constituents instead of passing the blame to the Republicans. With things getting more and more desperate, waiting for the next once-in-a-century opportunity to even begin pushing is a ridiculous proposition.

Most of the energy going into this debate has been focused on personalities; on AOC, on Dore and on his critics. But really this is just the latest manifestation of a perennial dynamic whose roots go much deeper.

The entire revolutionary struggle, ultimately, is a battle between movement and inertia. Wherever you’ve got a political status quo that needs changing you’ll find revolutionary-minded forces pushing toward change and guardians of the status quo making clever-sounding arguments for why the smart strategy is to remain motionless. When the status quo is destructive and unsustainable, as this one unquestionably is, the ones pushing for movement are always on the correct side of the debate.

Proponents of inertia always try to get people hung up on whether or not the specific details of the movement being proposed is exactly perfect in every conceivable way. They’ll point out that it might not succeed, as though you only get a finite amount of movements you’re allowed to make. They’ll act like any potential flaw is grounds for remaining inert, as though needing any every movement to be flawless is a standard we apply anywhere else in our lives. They’ll act like any move you make in a given direction will necessarily be the trajectory you will remain on forever, pretending you can’t simply course-correct as needed once you’re in motion.

They’re like the Lethargians in The Phantom Tollbooth, saying “you can do anything as long as it’s nothing” and making every argument they can come up with for why you should remain in the Doldrums forever.

We are stuck. Stuck in the Doldrums. Stuck in a power-serving holding pattern that is driving us toward death and dystopia.

What do you do when something is stuck? Do you insist that every movement you make to un-stick it must be perfect? Must be a movement you would keep making indefinitely without ever changing direction? Make sure it’s only ever a movement in the exact direction you want to move in?

Of course not. When something is stuck, you wiggle it around. Back and forth, shoving it this way and that in an attempt to create a little space which will allow movement. If your tire is stuck, you’ll move it in whatever direction you need to move it to get it unstuck, with the understanding that you can continue driving forward once you’ve freed yourself from whatever was holding you in place.

In the same way, our job here is to create movement. We don’t need to worry about offending Nancy Pelosi or upsetting the plans of the Lethargians in the sludge pool. We’ve just got to get things moving, with the understanding that we can continually course-correct once movement has begun. We’re on track to extinction via climate collapse or nuclear armageddon with an authoritarian dystopia looking very likely in the interim unless drastic changes are made, so our safety is not in remaining motionless.

The illusion that safety lies in inertia is due to a glitch in human perception called status quo bias, which causes people’s default assumption to be that keeping things the same is less risky than change even when that is plainly not the case. If you’ve ever been stuck up a tree as a kid you’ve experienced status quo bias very concretely: if you remain too afraid to release your grip on the branches swaying in the wind, you remain in a position that is entirely unsustainable.

That’s where we’re at right now, collectively as a species, all around the world. Our old way of doing things clearly is not working, but we’re still clinging to the thin branches at the top of the tree because our precarious situation causes us to mistake stillness for safety.

But the safety isn’t up here, it’s down on the ground with our feet firmly planted on old mother earth. It’s in a big movement from a society that is based on competition and driven by profit to a society that is based on collaboration with each other and with our ecosystem and based on compassion for all beings. Until we actually let go of our attachment to the status quo and take the leap into the unknown, trusting in our ability to course-correct as needed once we are in motion, we’re just killing time in the Doldrums, waiting for the end of the world.