HOME / SOCIAL/CULTURAL / As Coronvirus Grips the US, Americans Get a Taste of Life Under Sanctions 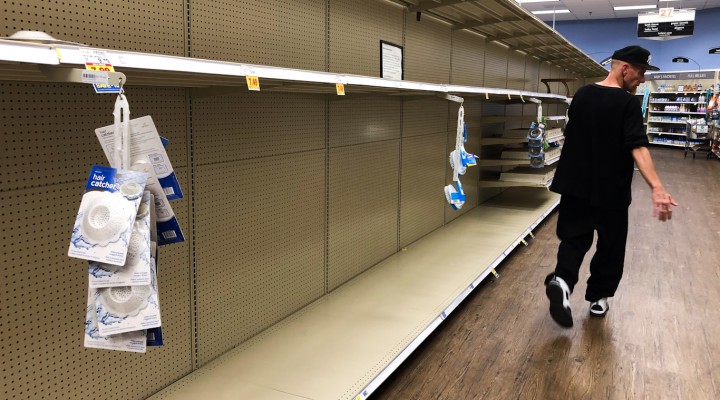 Crippling shortages, travel restrictions and overwhelmed medical services will give Americans a taste of what it is like for the millions of people living under US sanctions worldwide.

MPN– Across fifty states, Americans are collectively bracing for the incoming COVID-19 pandemic to hit. In the face of the virus, people are resorting to panic buying, stocking up on vital foods and goods, leading to pressing shortages of key products like hand sanitizer and toilet paper.

Perhaps more concerning, however, is that health experts all agree that the country is ill-equipped for the coming medical emergency. “We are not prepared, nor is any place prepared for a Wuhan-like outbreak,” said Dr. Eric Toner of Johns Hopkins Center for Health Security. “And we would see the same sort of bad outcomes that they saw in Wuhan – with a very high case fatality rate, due largely to people not being able to access the needed intensive care.” Chief among the problems is a lack of ventilators, a crucial machine to help critically ill patients breathe properly. New York City, for example, has barely one sixth of the ventilators it would need for a critical outbreak. If things get truly bad, the city has drafted laws to compel prisoners at Rikers Island jail to dig mass graves.

This is Rebecca and Fina — two sisters stocking up on groceries at Walmart that I spoke to with two very full carts. They are terrified from Trump's coronavirus response and the potential for martial law. They currently can't visit their sick mother who is in a nursing home because the nursing home has shut down.

One of the principal reasons why the U.S. is so unprepared is that it spends so little on public health in comparison with what it spends on war. The U.S. military’s projected budget is $934 billion per year, the Pentagon’s is $712 billion. In contrast, the Center for Disease Control (CDC) costs the taxpayer only $6.6 billion. At a time of crisis, many Americans are reassessing which organization they feel is truly protecting them from danger. While increasing the military budget, President Trump has consistently argued for cuts to the CDC. Amazingly, the Trump administration confirmed last week that it intends to slash funding from the body, even as the country begins reeling from the impact of COVID-19.

The crippling shortages, inability to move and the likely overwhelming of medical services will give Americans a taste of what it is like to live under sanctions that it imposes on a number of countries worldwide. U.S. sanctions on Venezuela, declared illegal and a “crime against humanity” by the United Nations, are conservatively estimated to have killed more than 40,000 people between 2017 and 2018 alone. Diabetics, for example, have been unable to get insulin because of the embargo, leading to mass deaths. The Cuban government estimates that the American embargo has cost it over $750 billion. Meanwhile, Iran, wracked by the virus that has caused more than 850 confirmed deaths, has been decimated by Trump’s increased sanctions.

The Iranian rial lost 80 percent of its value, food prices doubled, and rents and unemployment soared. Because of the sanctions, patients with conditions like leukemia and epilepsy have been unable to get treatment. After the coronavirus hit it, no country would sell the Islamic Republic basic medical supplies like masks, fearful of reprisals from the world’s only superpower. The shortages are so bad that doctors are being forced to share facemasks with other hospital staff. Eventually the World Health Organization stepped in and began supplying Iran directly. The Iranian government also invented an app to deal with COVID-19, hoping to share information with its citizens to help fight its spread but Google removed it from its app store citing the sanctions that prevent it from promoting anything Iranian-made. The effect of the sanctions in helping spread COVID-19 across Iran and beyond is immeasurable.

Despite the circumstances, countries under American pressure are trying their best to stem the outbreak. In Venezuela, doctors have begun going door-to-door with sanitation workers and medical students, checking temperatures and providing information and consultation to the population for free. Cuba, meanwhile, is actually exporting medical professionals, sending them both to less advantaged neighbors like Jamaica and to advanced countries like Italy. The Cuban pharmaceutical industry is world-renowned, and a local antiviral drug, Interferon Alpha 2b, has proved crucial in limiting deaths in China. The Cubans were forced to develop their industry due to U.S. sanctions limiting what they could import. China, Cuba and Venezuela are working together with Italy to try to halt the virus’ spread.

As an ER doc trying to treat patients who may have COVID-19, I can't underscore enough how much harder the lack of testing is making our job. Yes we're used to making life-or-death decisions with limited information, daily. But this scenario is very different. Here’s why: (1/12)

Iran appears willing to do everything to slow the epidemic within its borders. Last week it announced it was even releasing 70,000 prisoners from its jails. In contrast, incarcerating more people seems to be a priority for American authorities. ICE recently launched a huge new crackdown, attempting to “flood the streets” with agents. Last night, it used the chaos caused by the pandemic to fly six detained children from Dallas to New York.

The Trump administration is also attempting to pressure a German pharmaceutical company to provide it with an exclusive coronavirus vaccine “only for the United States,” something that was met with utter disgust in Europe. “Germany is not for sale,” roared its economy minister, Peter Altmaier. Meanwhile, American pharmaceutical giant Gilead is trying to block China’s use of a potential coronavirus treatment, arguing that China would give it away free to the rest of the world, hurting the company’s profits. This is despite the fact Gilead used people in Wuhan as guinea pigs for research.

Despite being praised by the World Health Organization for its response, Washington appears to be very angry at China. At the Democratic presidential debate last night Senator Bernie Sanders was asked, “What consequences should China face for its role in this global crisis?” – a question that suggested sanctions were in order for Beijing. Perhaps given they now have a taste of what the reality of sanctions entail, the American public may not be as supportive of them as they have been in the past.

Feature photo | A patron at a local grocery store walks past empty shelves usually stocked with toilet paper due to the coronavirus pandemic, March 15, 2020, in Phoenix. Ross D. Franklin | AP

0 thoughts on “As Coronvirus Grips the US, Americans Get a Taste of Life Under Sanctions”