HOME / WORLD / US hopes both sanctions & Covid-19 in Iran will force regime change. But it’s a MASS MURDER that will only strengthen Tehran govt 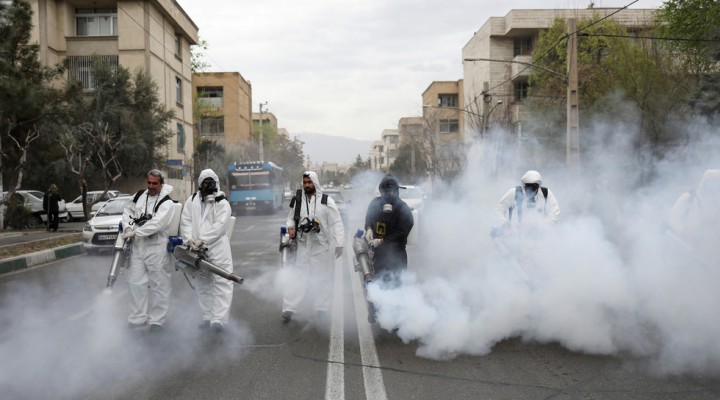 Iran’s New Year celebration of Nowruz finds it weathering a perfect storm of US sanctions, low oil prices and Covid-19. The resulting humanitarian crisis may make it even more resilient, as Iranians rally around their government.

Iran is facing an existential crisis, brought on by  a combination of economic, political and social emergencies which, when combined, threaten to bring the nation to its knees. The United States has, over the years, sought to destabilize Iran in hopes that it would collapse from within, clearing the way for a new pro-Western government. The current ‘maximum pressure’ campaign, built around stringent economic sanctions targeting virtually every aspect of the Iranian economy, is designed to not only bring Iran to the negotiating table, but to drive its leadership from power.

The chances of such an outcome today, however, are slim. The Iranian government has proven itself to be quite resilient, and the very policies that the US is pursuing in Iran may turn out to be counterproductive, rallying Iranians around their embattled government.

This is not to say that the domestic political situation inside Iran is ideal for the government–far from it. The economic crisis in Iran brought on by US sanctions has led to a loss of confidence in the moderate government of President Hassan Rouhani, leading to the election of a conservative parliamentary majority on February 21. The percentage of Iranians who actively participated in this election was around 42.5 percent, a nearly 20 percentage-point decline from the previous legislative election in 2016. The low electoral turnout was a clear-cut vote of no confidence on the part of the Iranian people in their system of government.

In addition to crippling US sanctions, an oil price war between Russia and Saudi Arabia, which began on March 9, has gutted Iran’s already fragile economy, further testing the frayed relationship between the Iranian people and their government. And if this wasn’t enough, Iran’s first case of coronavirus was detected on February 19. By March 20 about 20,000 Iranians were stricken with the disease, more than 1,400 of whom had died. The Iranian health care system was being overwhelmed with patients, with no end in sight.

There was no hint of regime-change tinged animosity in Secretary of State Mike Pompeo’s Nowruz address to the people of Iran, in which he declared that “We are saddened to learn of the mounting deaths this virus has caused, particularly in Iran.” Pompeo closed by noting that “To support the recovery from this especially difficult time, our offer still stands to send humanitarian and medical assistance to the people of Iran.”

I join President @realDonaldTrump in wishing a happy, healthy, and prosperous #Nowruz to all who celebrate this tradition across the world. As Nowruz also symbolizes rebirth, may this year serve as an opportunity to refresh our commitments to health, hope, and renewal for all! pic.twitter.com/lPBEi1QRuX

Earlier this week, Brian Hook, the US Special Representative for Iranian Affairs, in a statement to reporters, provided a more accurate picture of Washington’s policy toward Iran. “Our policy of maximum pressure on the regime continues,” Hook noted. “US sanctions are not preventing aid from getting to Iran.”

Responding to calls from China, Russia and elsewhere for the US to provide some sanctions respite for humanitarian relief from the devastating impact of the corona pandemic in Iran, Hook observed that the US had sent a diplomatic note to the Iranians offering assistance with coronavirus, but that this note “was quickly rejected.” But then Hook went on to blame Iran’s leadership for the coronavirus outbreak, saying that Tehran “spends billions on terrorism and foreign wars” and adding that if it had spent one-tenth of this money “on a better health care system, the Iranian people would have been much better off.”

As bleak as the situation looks for the people of Iran, there is reason to believe that the Islamic Republic may emerge from this crisis stronger than when it entered. Foreign Minister Javad Zarif hinted at this in a tweet sent out in the aftermath of Brian Hook’s press briefing. “[The] US administration gleefully takes pride in killing Iranian citizens on Nowruz,” Zarif wrote, adding that the White House had taken its ‘maximum’ pressure’ campaign “to a new level of inhumanity with its utter contempt for human life.” Zarif concluded by noting that “Your policy will live in infamy. Iran won’t break.”

The White House takes its "maximum pressure" to a new level of inhumanity with its utter contempt for human life.

Iran to US: Your policy will live in infamy. But Iran won't break. pic.twitter.com/2xGWG8xxH8

While the ‘maximum pressure’ campaign has weakened the Iranian economy and eroded the confidence of the Iranian people in their government, by denying Iran access to humanitarian aid at the same time it is subjecting Iran to some of the most stringent economic sanctions ever, the US risks negating the impact of its policy by alienating an international community desirous of helping Iran recover from the coronavirus outbreak, and similarly rallying the Iranian people in support of their embattled government. If this were to occur, it would be a fitting manifestation of the law of unintended consequences.

0 thoughts on “US hopes both sanctions & Covid-19 in Iran will force regime change. But it’s a MASS MURDER that will only strengthen Tehran govt”