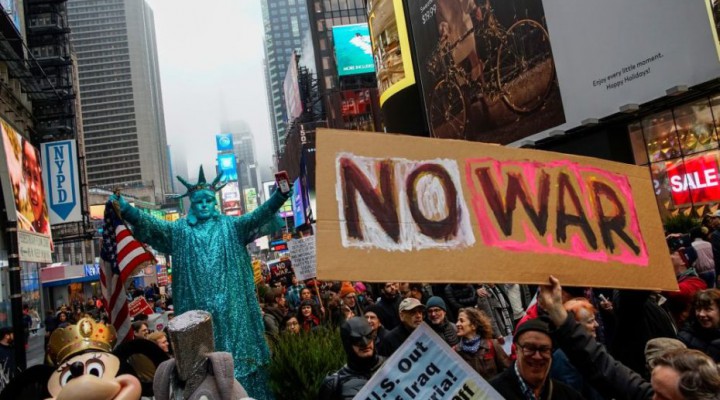 One aspect of the American heavy footprint that is little noted is the ruin of many formerly functioning countries that it brings with it.

The Global War on Terror or GWOT was declared in the wake of 9/11 by President George W. Bush. It basically committed the United States to work to eliminate all “terrorist” groups worldwide, whether or not the countries being targeted agreed that they were beset by terrorists and whether or not they welcomed U.S. “help.” The GWOT was promoted with brain-dead expressions like “there’s a new sheriff in town” which, after the destruction of large parts of the Middle East and Central Asia, later morphed into the matrix of the God-awful belief that something called “American Exceptionalism” existed.

With a national election lurking on the horizon we will no doubt be hearing more about Exceptionalism from various candidates seeking to support the premise that the United States can interfere in every country on the planet because it is, as the expression goes, exceptional. That is generally how Donald Trump and hardline Republicans see the world, that sovereignty exercised by foreign governments is and should be limited by the reach of the U.S. military. Surrounding a competitor with military bases and warships is a concept that many in Washington are currently trying to sell regarding a suitable response to the Chinese economic and political challenge.

Secretary of State Mike Pompeo puts it another way, that the U.S. is a “force for good,” but it was former Secretary Madeleine Albright who expressed the fantasy best, stating that “…if we have to use force, it is because we are America; we are the indispensable nation. We stand tall and we see further than other countries into the future, and we see the danger here to all of us.” She also said that the deaths of 500,000 Iraqi children through U.S. imposed sanctions was “…a very hard choice, but the price — we think the price is worth it.” That is the basic credo of the liberal interventionists. Either way, the U.S. gets to make the decisions over life and death, which, since the GWOT began, have destroyed or otherwise compromised the lives of millions of people, mostly concentrated in Asia.

One aspect of the American heavy footprint that is little noted is the ruin of many formerly functioning countries that it brings with it. Iraq and Libya might have been dictatorships before the U.S. intervened, but they gave their people a higher standard of living and more security than has been the case ever since. Libya, destroyed by Barack Obama and Hillary Clinton, had the highest standard of living in Africa. Iraq is currently one of the world’s most corrupt countries, so corrupt that there have been massive street demonstrations recently against the government’s inability to do anything good for the its own people. Electricity and water supplies are, for example, less reliable than before the U.S. intervened seventeen years ago.

Add Afghanistan to the “most corrupt” list after 19 years of American tutelage and one comes up with a perfect trifecta of countries that have been ruined. In a more rational world, one might have hoped that at least one American politician might have stood up and admitted that we have screwed up royally and it is beyond time to close the overseas bases and bring our troops home. Well, actually one did so in explicit terms, but that was Tulsi Gabbard and she was marginalized as soon as she started her run. Alluding to how Washington’s gift to the world has been corruption would be to implicitly deny American Exceptionalism, which is a no-no.

The failures of the American foreign policy since George W. Bush have been accredited to the so-called neoconservatives, who successfully hijacked the Bush presidency. Paul Wolfowitz, Doug Feith, Scooter Libby and the merry crowd at the American Enterprise Institute had a major ally in Vice President Dick Cheney and were pretty much able to run wild, creating a casus belli for invading Iraq that was largely fabricated and which was completely against actual U.S. interests in the region. Apparently no one ever told Wolfie that Iraq was the Arab bulwark against Iranian ambitions and that Tehran would be the only major beneficiary in taking down Saddam Hussein. Since Iraq, the chameleonlike neocons have had a prominent voice in the mainstream media and have also played major roles in the shaping the foreign and national security policies of the presidencies that have followed George W. Bush.

Ironically, neocons mostly were critics of Donald Trump the candidate because he talked “nonsense” about ending “useless wars” but they have been trickling back into his administration since he has made it clear that he is not about to end anything and might in fact be planning to attack Iran and maybe even Venezuela. The thought of new wars, particularly against Israel’s enemy Iran, makes neocons salivate.

The disastrous American occupation of Iraq from 2003-2004 was mismanaged by something called the Coalition Provisional Authority (CPA), which might have been the most corrupt quasi-government body to be seen in recent history. At least $20 billion that belonged to the Iraqi people was wasted, together with hundreds of millions of U.S. taxpayer dollars. Exactly how many billions of additional dollars were squandered, stolen, given away, or simply lost will never be known because the deliberate decision by the CPA not to meter oil exports means that no one will ever know how much revenue was generated during 2003 and 2004.

Some of the corruption grew out of the misguided neoconservative agenda for Iraq, which meant that a serious reconstruction effort came second to doling out the spoils to the war’s most fervent supporters. The CPA brought in scores of bright, young true believers who were nearly universally unqualified. Many were recruited through the Heritage Foundation or American Enterprise Institute websites, where they had posted their résumés. They were paid six-figure salaries out of Iraqi funds, and most served in 90-day rotations before returning home with their war stories. One such volunteer was former White House Press Secretary Ari Fleischer’s older brother Michael who, though utterly unqualified, was named director of private-sector development for all of Iraq.

The $20 billion disbursed during the 15-month proconsulship of the CPA came from frozen and seized Iraqi assets held in the U.S. Most of the money was in the form of cash, flown into Iraq on C-130s in huge plastic shrink-wrapped pallets holding 40 “cashpaks,” each cashpak having $1.6 million in $100 bills. Twelve billion dollars moved that way between May 2003 and June 2004, drawn from the Iraqi accounts administered by the New York Federal Reserve Bank. The $100 bills weighed an estimated 363 tons.

Once in Iraq, there was virtually no accountability over how the money was spent. There was also considerable money “off the books,” including as much as $4 billion from illegal oil exports. Thus, the country was awash in unaccountable cash. British sources report that the CPA contracts that were not handed out to cronies were sold to the highest bidder, with bribes as high as $300,000 being demanded for particularly lucrative reconstruction contracts. The contracts were especially attractive because no work or results were necessarily expected in return.

Many of its staff, like Michael Fleischer, were selected for their political affiliations rather than their knowledge of the jobs they were supposed to perform and many of them were not surprisingly neocons. One of them has now resurfaced in a top Pentagon position. She is Simone Ledeen, daughter of leading neoconservative Michael Ledeen. Unable to communicate in Arabic and with no relevant experience or appropriate educational training, she nevertheless became in 2003 a senior advisor for northern Iraq at the Ministry of Finance in Baghdad.

Simone has now been appointed deputy assistant secretary of defense (DASD) for the Middle East, which is the principal position for shaping Pentagon policy for that region. Post 9/11, Ledeen’s leading neocon father Michael was the source of the expressions “creative destruction” and “total war” as relating to the Muslim Middle East, where “civilian lives cannot be the total war’s first priority … The purpose of total war is to permanently force your will onto another people.” He is also a noted Iranophobe, blaming numerous terrorist acts on that country even when such claims were ridiculous. He might also have been involved in the generation in Italy of the fabricated Iraq Niger uranium documents that contributed greatly to the march to war with Saddam.

Apparently Simone’s gene pool makes her qualified to lead the Pentagon into the Middle East, where she no doubt has views that make her compatible with the Trump/Pompeo current spin on the Iranian threat. The neocon Foundation for Defense of Democracies (FDD) gushed “Simone Ledeen has worked at the Pentagon & Treasury and at a major bank. Exactly what we should want for such a position.” Of course, FDD, the leading advocate of war with Iran, also wants someone who will green light destroying the Persians.

Ledeen, a Brandeis graduate with an MBA from an Italian university, worked in and out of government in various advisory capacities before joining Standard Chartered Bank. One of her more interesting roles was as an advisor to General Michael Flynn in Afghanistan at a time when Flynn was collaborating with her father on a book that eventually came out in 2016 entitled The Field of Fight: How We Can Win the Global War Against Radical Islam and its Allies. The book asserts that there is a global war going on in which “We face a working coalition that extends from North Korea and China to Russia, Iran, Syria, Cuba, Bolivia, Venezuela and Nicaragua.” The book predictably claims that Iran is at the center of what is an anti-American alliance.

The extent to which Simone has absorbed her father’s views and agrees with them can, of course, be questioned, but her appointment is yet another indication, together with the jobs previously given to John Bolton, Mike Pompeo and Elliot Abrams, that the Trump Administration is intent on pursuing a hardline aggressive policy in the Middle East and elsewhere. It is also an unfortunate indication that the neoconservatives, pronounced dead after the election of Trump, are back and resuming their drive to obtain the positions of power that will permit endless war, starting with Iran.

What the Media Won’t Tell You About US-Iran War

The Revolution in Military Affairs