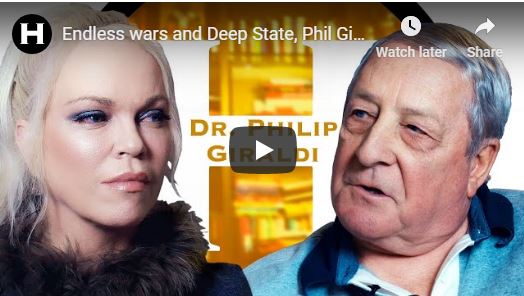 “American foreign policy has shifted considerably since Jimmy Carter and Ronald Reagan when the neo-conservative movement started to appear in the Pentagon and the State Department. They were behind many of the changes.”

“The neo-con point of view is that the American Republic – I hate to use that phrase – should be playing a leadership role internationally, telling other countries what is good for them and what they should do. They packaged this whole thing by saying it is for democracy and free trade. What it really was is dominance by the United States in terms of dictating to other countries what their internal and external policies should be. This is all tied in with globalism.”

“It is important to understand that the neo-conservatives always believed that since the United States has the power to tell much of the world what to do, it should exercise that power.”

“The second thing they have to do is keep the American taxpayer paying for the weapons, for soldiers and for the neo-con think tanks. They had to create a threat, and the threat has been Russia, at least for the last 20 years. Russia is a plausible threat. It is essentially a fake threat, because Russia has not threatened the United States or Western Europe as its economy much smaller than that of Europe and the US. I believe it is the size of Italy. Its armed forces are much smaller. This whole thing is a is a phony threat.”

“Another element is that most of the neo-cons are Jewish, and most of them are very deferential to Israel and to Israel’s leadership which has been Benjamin Netanyahu for many years now. This explains why a lot of the things that happen in the Middle East that don’t make any sense, like Syria. Why is the United States obsessed with Syria, it is not a threat! Yet, the United States is playing this game with Syria. But Syria is an issue for Israel.”

“An interesting aspect of America’s war on terror is the fact that we have, very often, created the terrorist groups and supported them when it was desirable to support them. They were handy to use against Bashar al-Assad in Syria, for reasons of helping Israel more than anything.”

“ISIS were allowed to take over the Syrian oilfields and sell the oil in Turkey. This was all allowed. As a Russian friend of mine commented, ISIS was selling all this oil with huge convoys of a hundred trucks at a time and somehow the United States didn’t see it. When the Russians saw it, they stopped it immediately, so the United States was allowing this to go on.”

“Of course, the Turks were profiting from what was going on, but also bear in mind that the United States was funding other insurgencies and terrorist groups at the same time. Many of these groups, once they arrived in Syria, immediately joined ISIS and gave them their weapons and money that they had obtained from the CIA and from Pentagon. It all went into ISIS, so it was again hypocrisy at a level that it’s almost unbelievable.”

The Herland Report is a Scandinavian news site, TV channel on YouTube and Podcast on SoundCloud, reaching millions yearly. It is a great place to watch interviews with leading intellectuals, thought leaders, authors and activists from across the political spectrum – free from political correctness.

The Herland Report believes in freedom of speech and its editorial policy resides above the traditional Left vs Right paradigm which we believe has lost its relevance and ability to describe the current driving forces in Western politics.
We regularly feature a variety of opinion and analysis from a number of commentators from across the political spectrum.

The Herland Report is founded by Hanne Nabintu Herland, a Scandinavian historian of comparative religions, bestselling author, commentator and TV producer, known from the media for sharp analysis and fearless speech. She was born and raised in Africa, has lived in South America, in the Middle East, and travelled extensively in Asia.