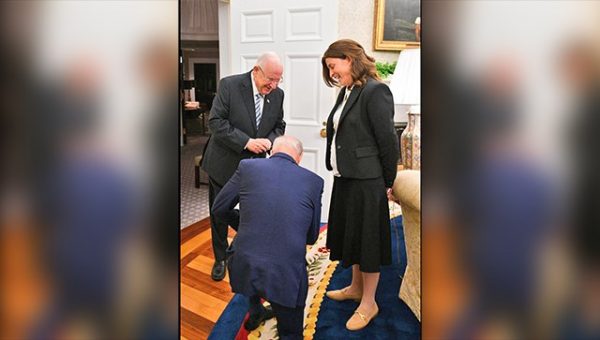 Kneeling before Israelis is latest indication of who rules in Washington

If one were only limited to viewing or reading the US mainstream media the story of how President Joe Biden went down on his knees to honor two visiting Israelis would never have surfaced. Fortunately, the story did make considerable waves in both the Israeli and the alternative media, though not enough to convince the faceless editors at CBS news and elsewhere to run with it. The kneeling incident reportedly took place while Biden was meeting in the White House with soon-to-be retired Israeli president Reuven Rivlin. Rivlin was doing something like his victory lap, having presumably completed his term of office without being charged with corruption, which is what the Jewish state’s leaders have traditionally been noted for.
In fact, the good news re Israeli corruption is that recent ex-prime minister Benjamin Netanyahu, who has been dogged by corruption charges for years, no longer can claim immunity and just might now have to pay the piper and go to jail together with his lovely wife Sara. The thought of Netanyahu in the slammer brings tears of joy to my eyes, not only because he is dishonest and a thief, but also because he was part of an Israeli spy ring that obtained nuclear triggers to construct bombs, which was operating against the United States back when he lived here in the 1970s-80s. But that is another story for another day.

Rivlin was in town to say goodbye but also to discuss Iran. The Israeli view on Iran is that the Mullahs have a secret nuclear weapons program so any kind of agreement with them allows work to proceed clandestinely. Israel believes that allowing the United States to re-enter into 2015’s Joint Comprehensive Plan of Action (JCPOA) would take the heat off Iran and would virtually guarantee that the Islamic Republic would wind up with a nuclear weapon, which would threaten the entire region, most particularly Israel and the Saudis. This line is, of course, being echoed by Israel’s many friends in the United States.

The other view, supported by both the United Nations and the US intelligence community, is that it is Israel rather than Iran that has a secret nuclear arsenal which is not subject to international inspection. Everyone but Israel believes that Iran, for its part, long ago gave up an exploratory program that might plausibly have led to a weapon. The only so-called evidence challenging that view consists of information on a lap top that was fortuitously discovered by some opponents of the Iranian government which had previously been fabricated by Israeli intelligence and placed so as to be found and exposed.

Biden, completely predictably, assured the Israeli president that his personal commitment to the Jewish state is “iron-clad.” No doubt Rivlin for his part passed the Israeli view regarding Iran on to Biden during their meeting, though there has been no subsequent document describing in any detail that aspect of their discussion. The White House press release described their interaction as follows: “President Biden conveyed his unwavering support for Israel’s security and his commitment to deepening the cooperation between the two countries across all fields. The leaders discussed the many challenges facing the region, including the threat posed by Iran. The President emphasized that under his administration, Iran will never get a nuclear weapon. He also assured President Rivlin that the United States remains determined to counter Iran’s malign activity and support for terrorist proxies, which have destabilizing consequences for the region.”

In reality, of course, it is Israel and the US that are nuclear armed and have been supporting terrorist proxies in the Middle East, but we’ll give that one a pass. Rivlin had with him his 45 year-old chief of staff, a Haredi Orthodox Israeli woman named Rivka Ravitz who has borne twelve children. Many Orthodox Jews apparently believe that procreating up to maximum capacity is a requirement that comes straight from Yahweh. Joe responded with something like delight at the report of the “cheaper by the dozen” offspring and he got so excited that he went down on one knee to honor the lady and, presumably, her boss. And to make matters worse, a photographer who accompanied the Israeli entourage was in the room with the beaming trio and was able to take a picture of Joe on one bended knee, though it also has been claimed that he might have gone down on both knees which raises the question how he managed to get back up at his age. Are Secret Service Agent required to lift up kneeling presidents?

So here we have the president of the United States down on one or two knees in front of two former Israeli government officials. Doesn’t look good, does it? But it could be a metaphor for what the entire United States government and Establishment choose to do when it comes to Israel. Too bad there is no recording of what Honest Joe was saying as he was going down. Was it the usual inarticulate mumble or something acknowledging the power and majesty of his visitors? As noted above, avowed Zionist Joe reportedly said either before or maybe after his prostration that the commitment to Israel is “iron-clad,” which one might suggest to be the unofficial motto of the United States Congress.

I know that Joe Biden and almost everyone else in Washington politics would not share my view of the Israel-US relationship, which to put it succinctly goes as follows: the United States relationship with Israel is a strategic liability that has been a major factor in US involvement in avoidable wars that have cost a great deal of money and have done terrible damage to actual interests, while also leading to the killing of hundreds of thousands of civilians and American soldiers. On top of that, the US inexplicably gives Israel, a wealthy nation, billions of dollars each year and uncritical political support that has contributed to America’s sharply declining international standing. Finally, though the Israel Lobby that has brought all of this about through corruption of congress and the media includes a rabid Christian Zionist subset, the money and access to genuine political power nearly all comes from American Jewish groups and wealthy individuals who are guilty of dual loyalty, or actually singular loyalty to Israel. They should all be registered as “foreign agents” to make completely clear where their allegiance lies.

Biden is, to be sure, a funny bloke who wants to pretend to being a devout Roman Catholic while also supporting abortion as a form of birth control. He also appears to want to be President of the United States while giving “iron-clad” guarantees of loyalty to a foreign country. Given that, his kneeling to Israeli officials in the Oval Office is under the circumstances appropriate as it reflects who is actually in charge. Biden, like Nancy Pelosi and the other bottom crawlers that make up the US Congress, reflexively and automatically defers to Israel and to the powerful Jewish community on both foreign policy and many domestic issues. If one cannot accept that simple truth it will become impossible to understand what is actually at play.

Apart from a handful of liberals, who in the Congress is complaining about using readily and even illegally supplied American weapons to kill Gazans? What do we have to do to have a president that actually puts Americans first, since neither Donald Trump nor Joe Biden seem prepared to do so? It is an unavoidable fact that on so many of these issues the American federal and even many state and local governments have been dominated by Israel’s interests. The only question is “What can be done to change that dynamic?” That’s the underlying problem, but change just might come if and when more Americans begin to realize the extent to which their president and governing system have been compromised and their tax dollars stolen by Israel!

The War on Antisemitism Gains Momentum