HOME / WORLD / Fighting Back Against the Israel Lobby

Fighting Back Against the Israel Lobby 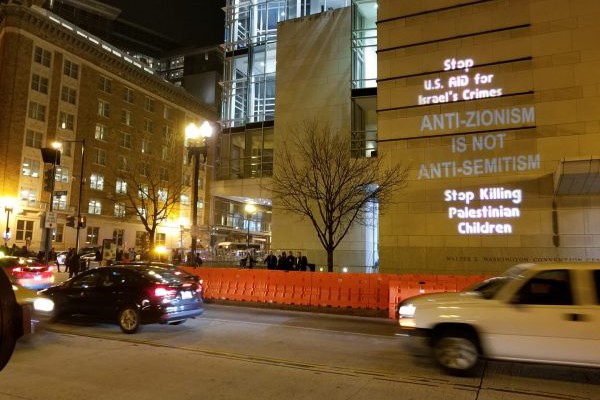 Ordinary Americans can organize and win

During many years of writing about or describing the terrible damage that the “special relationship” with Israel has done to the United States the question occasionally comes up “Given the enormous power of the Zionist lobby, what can we do to bring about change?”

It is a simple question, though one that begs for multiple answers, but it also requires some thinking about how the Establishment, better known as the Deep State, operates in America. The American Deep State, which has as one of its dearest principles eternal nurturing of Israel’s interests, is actually a bundle of individual enterprises that together operate to sustain policies that are mutually beneficial. Its epicenters include financial services and faux news media in New York and the political hub in Washington, but it also is served by Hollywood’s entertainment plus propaganda machine.

And the three parts of the Deep State are essentially interchangeable, with generals and intelligence figures ignorant of finance winding up in the KKR Global investment firm as has General David Petraeus and Michael Morell in Beacon Global Strategies, while leading representatives from Wall Street do a turn in government, particularly at the Treasury Department. Television news and entertainment also feature celebrities from across the Establishment while Hollywood draws on all of the above and works hard to make sure the contrived narrative about American democracy and its wonderful “allies” is promoted at every opportunity.

Which brings us to the Israel Lobby which is an integral part of the Deep State and in some ways one of its most powerful elements as it has a foot in all the other components plus depth that enables it to interfere in American government at the federal, state and local levels. It is indisputably the driving force behind U.S. foreign policy in the Middle East and even beyond as it enforces standards on alleged anti-Semitism and engages in Lawfare and other shady practices to protect the Jewish state. It differs somewhat from other parts of the Establishment in that it pretends to have no such power at all, a fiction that it preserves by pretending that its actions are all in defense of U.S. national security against evil nations like Iran. From the Lobby’s expressed point of view, Israeli and American interests just happen to coincide.

By some estimates, there are 600 Jewish organizations active in the United States that have at least as part of their raison d’etre the defense of Israel and Israeli interests. They are supplemented by Christian Zionist groups like Christians United for Israel (CUFI) that claims seven million supporters. The leading predominantly Jewish organizations like the American Israel Public Affairs Committee (AIPAC) and the Foundation for Defense of Democracies (FDD) are largely funded by Jewish oligarchs and exist to promote Israeli interests, to include pressuring the United States into attacking Iran.

The Israel Lobby groups are awash in money, with AIPAC alone having an annual budget of more than $100 million and 200 employees, who are able to blanket Capitol Hill and actually write legislation for lazy congressmen. The salary and benefits of its Executive Director Howard Kohr exceed $1 million. Against that, no organization critical of the Israeli relationship has resources sufficient to do anything beyond surviving at a basic level and trying to get the message out.

So what to do? First of all, there is Congress. Pat Buchanan once referred to Congress as “enemy occupied territory.” He was referring to the Israel Lobby’s ability not only to control the discussion on the Middle East but also to focus its efforts to defeat any congressman who dared criticize the Jewish state. Politicians like Paul Findley, Chuck Percy, William Fulbright, Pete McCloskey, James Traficant and Cynthia McKinney, who were brave enough to stand up against Israel, found themselves out of a job after confronting well-funded and media supported opponents at reelection time, sending the message that it was career ending to do so.

That would suggest that it must be regarded as a given that congressmen and women will be terrified of saying the wrong thing about Israel, but the reality is not quite so simple. I have had numerous contacts with congressmen through the years, first by way of government Congressional Delegations (CODELS) when I was overseas with CIA, and more recently in Washington at various conferences and meetings. A quite surprising percentage of legislators were privately quite willing to express their dislike of Israel and its policies, though none of them were brave enough to go public with such sentiments. Some of them even expressed their desire to see the Israel Lobby effectively destroyed because of its corruption of America’s institutions, surely an admirable viewpoint.

That means that there is an audience in Congress even if it is essentially passive. American citizens who wish to become involved but are disdainful of getting active in political campaigns or in even dealing with congressmen should recall Plato’s warning that “Those who are too smart to engage in politics are punished by being governed by those who are dumber.” A good friend of mine from California who has worked the congressional circuit on Palestinian issues, most recently in backing the Congresswoman Betty McCollum bill opposing Israel’s military detention of children, believes that it is necessary to be persistent to get through. She calls her congressman and tries to set up an appointment to discuss the Middle East, saying that she is available whenever there is an opening in the schedule and is even willing to fly to Washington if that works best. When she is predictably put off, she persists, calling again and again until she gets an appointment. The appointment itself is usually with a staffer, but when she gets to the office she pushes again for another meeting, this time with the congressman. She repeats the process as necessary.

One might argue that one woman meeting with one congressman has virtually no impact, which may on the surface be true, but it reflects a failure to understand how congress works. If that same congressman gets twenty-five calls on one issue, it is highlighted by the staff and the congressional office begins to pay attention. If there are a hundred calls it is treated seriously. Surely in every congressional district in the U.S. there are one hundred activists willing to bug congress on the issue of the Israel relationship and the wars and devastation that it has brought. If everyone angry about Israel were to call his or her congressmen there would be a panic on Capitol Hill to be sure, but major unrest over the lopsided and dangerous relationship is exactly what is needed.One particular subject to raise with congressmen is the issue of Zionist foundations’ apparent immunity from having to register as foreign agents under the Foreign Agents Registration Act (FARA) of 1938. Russian media outlets have been forced to comply even though they are in no position to advance policies favorable to Moscow. The Israel Lobby, which even writes legislation favorable to its most favored nation, is only exempted because congress and the White House fear confronting Jewish power.

For activists who identify with the political parties, in a like fashion putting pressure on delegates to next year’s nominating conventions would also be desirable. While the Republican Party’s hawkish representatives would almost certainly be difficult to approach in that fashion, the Democrats could prove to be much more susceptible. There has been considerable criticism of Israel surfacing among the Democratic base, not just from the “Squad in Congress,” most of which is now more sympathetic to the Palestinians than to the Israeli occupiers. An uprising by the party faithful demanding an open discussion of the blank check support for Israel is not inconceivable and it would really shake up the status quo.

The same basic formula works with the media. Send in one letter-to-the-editor criticizing Israel and you will be ignored. Send in letter after letter and one piece might eventually appear. If one hundred newspaper subscribers are sending in letters, the editorial staff will begin to take notice. This has, in fact, been a development in the mainstream media over the past five years. Disenchantment with Benjamin Netanyahu and the horror that he represents has been growing, so much so that the genie is out of the bottle regarding Israeli “democracy.” As a result, it is now possible to read op-eds and editorials highly critical of Israel even in Jewish-owned Establishment pillars likeThe New York Times. But much, much more of the same is needed.

Finally, people who want to be freed from the Israeli yoke should support organizations that are seeking to do just that and have been in the front line of the struggle. There is my own Council for the National Interest as well as If Americans Knew, The Washington Report and IRMEP just for starters, supplementing the activity of a number of groups that focus on Palestinian rights. Sites like the Ron Paul Institute and Antiwar are also excellent sources of information.

All such organizations do benefit from the support of activists who are willing to speak up and protest over the brutal behavior of the Israeli government, particularly as the Israel Lobby has turned the United States into a co-conspirator for the Jewish state’s war crimes. All the groups are active in holding seminars and speaking events nationwide, information which can be obtained from their websites.

So, the message is that the Israel Lobby is powerful but it is not invulnerable. We have to keep pounding on congress, the political parties and the media if we are ever to be unshackled from the Israeli monster. We have to do it and even more because the very future of our country and what kind of nation we will be is at stake.

0 thoughts on “Fighting Back Against the Israel Lobby”