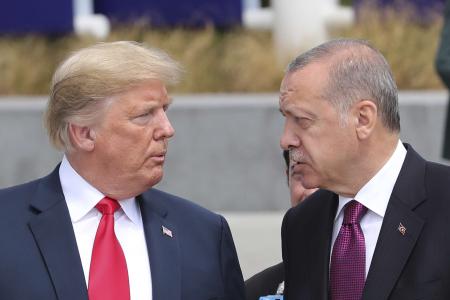 Trump cancels the pullout from Syria then flip-flops, threatens war with Turkey and gives money to terrorists

The long nightmare in Syria might finally be coming to an end, but not thanks to the United States and the administration of President Donald Trump. Trump’s boastthat “this was an outcome created by us, the United States, and nobody else” was as empty as all the other rhetoric coming out of the White House over the past two and a half years. Nevertheless, it now appears that the U.S. military just might finally be bidding farewell to an exercise that began under President Barack Obama as a prime bit of liberal interventionism, with American forces illegally entering into a conflict that the White House barely understood and subsequently meddling and prolonging the fighting.

The fundamental reason why the U.S. was so ineffective was that the Obama Administration’s principal objective from the beginning was to remove Syrian President Bashar al-Assad, yet another attempt at “humanitarian” regime change similar to that which produced such a wonderful result in Libya. Al-Assad was never in serious danger as he had significant popular support, including from the country’s Christian minority, and American piecemeal attempts to negotiate some kind of exit strategy were doomed as they eschewed any dealing with the legitimate government that was in place. The Syrian civil war supported and even enabled by Washington caused more than 500,000 deaths, created some 9 million internal and external refugees, and destroyed the Syrian economy and infrastructure while also almost starting a war between the U.S. and Turkey.

The Russians understood the American mistake and consequently were able to arrange a settlement which now appears to be viable. They were able to deal with the Syrian government, Turkey, and the Kurds who had been set adrift by Washington. The arrangement arrived at has a number of significant features. First, it guarantees Syria’s territory integrity, which presumably means the U.S. will eventually have to evacuate its remaining positions in the oil region. Second, it satisfies Turkish legitimate security demands for a disarmed safe zone, which means that Kurdish militias will have to disarm and/or move twenty miles away from the border. The safe zone will be patrolled by the Syrian Army and the Russians with Turkish observers. Third, all separatist groups (terrorists) will be hunted down and eliminated and further attempts by them to reestablish in Syria will be opposed by all parties to the agreement. Fourth, steps will be taken to make possible the orderly return of refugees to Syria.

It is undeniably true that throughout the Syrian farrago, President Trump’s admittedly inherited policy could not possibly have been more incoherent, occasionally bizarre, predictably inconsistent, and actually dangerous to genuine American interests in the region. It is to everyone’s benefit that the game is finally over, but one can expect the neoconservatives in the United States to do their best to bring about yet another reversal by Trump.

It must be conceded that along the way, President Trump was not exactly acting with a free hand. He has been beleaguered by a Deep State conspiracy against him that began even before he was nominated, though he didn’t have to help his enemies by shooting himself in the head at every opportunity through tweets and demeaning language. The apparent commitment to withdraw all U.S. forces from Syria was long overdue as Washington’s involvement in the fighting was wrong by every measure right from the beginning and remaining has only served to make more complicated the country’s recovery from eight years of conflict. It also was contrary to its publicly stated objective of destroying ISIS. A strong Syrian government was and is best placed to do just that and Washington, in a panic to recruit, train and arm mercenaries to fight Damascus often wound up arming terrorists.

But doing what is right does not go far in today’s United States of America and the fact that Trump is now taking credit for a ceasefire and by extension a settlement of the conflict means little as he has predictably folded already once on plans to withdraw. The argument that the Kurds have been betrayed has a certain cogency, but the reality is that the Kurdish leaders entered into a relationship with the U.S. military based on their own interests with no expectation that Washington would be backing them up forever. They are now well placed to cut their own deals with both Damascus and Ankara, with Russia in the middle working to sustain the agreement to end the fighting and restore the Syrian state’s status ante bellum.

To give Trump his due, his original announcement that he was removing ALL U.S. troops from Syria made powerful new enemies in the Israel Lobby, which has been backing the president because of his many favors to Tel Aviv but which has never really liked or trusted him. Israel has long, and even openly, promoted the breaking up of Syria into its component tribal and religious parts to enable the acquisition of even more land in the Golan Heights and to reduce dramatically the threat coming from any unified government in Damascus. It has also seen the Syrian civil war as a proxy conflict fought by the its poodle the United States against Iran. Israel and its friends in Congress and the media will, to say the least, be disappointed if the war is now truly ended and the U.S. military is withdrawn.

Trump also must continue to deal with the fallout from his Democratic Party opponents, having given them a cudgel to beat him over the head with as Nancy Pelosi, Chuck Schumer and Adam Schiff all wax emotional over how they really love those “freedom fighting” Kurds. The Democrats, having denounced Trump with one voice, were joined by Republicans like Mitch McConnell, Marco Rubio, Mitt Romney and the ever-versatile Lindsay Graham, all dedicated to the continuation of an interventionist foreign policy, though they would never quite call it that. It is not likely that any of them are really pleased with a deal to end the Syrian fighting.

So the opposition, coming from multiple directions against a Donald Trump also on the impeachment block for Ukraine, will continue and as of this writing it is by no means clear what will happen vis-à-vis the Pentagon announcing that some troops, augmented by armor units, would remain in Syria to protect the oil fields. Defense Secretary Mark T. Esper explained to reporters that the remaining U.S. troops would seek “to deny access, specifically revenue to ISIS and any other groups that may want to seek that revenue to enable their own malign activities.” The president has also suggested, in true Trumpean fashion, that “We want to keep the oil, and we’ll work something out with the Kurds. … Maybe we’ll have one of our big oil companies to go in and do it properly,” a step that even the feckless Obama Administration had hesitated to take on legal grounds as the oil unquestionably belongs to Syria. Trump’s amigo Senator Lindsey Graham elaborated on the plan, saying bluntly that “We can use some of the revenues from future Syrian oil sales to pay our military commitment in Syria.”

And there will be additional fallout from Syria in the damaged relationships in the region. Demonstrating that it could actually screw up two things simultaneously, the White House had unleashed Secretary of State Mike Pompeo, who warned last Tuesday that the United States was ready to go to war against Turkey if it proved necessary. He said “We prefer peace to war… But in the event that kinetic action or military action is needed, you should know that President Trump is fully prepared to undertake that action.” Pompeo’s comment comes on top of Trump warnings that he would “obliterate” or “destroy” the Turkish economy, statements that did not sit well in Ankara and will predictably only create new problems with a NATO member that has the largest army and economy in the Middle East.

And in another maladroit move, the White House has just announced that it will be giving $4.5 million to the so-called White Helmets, the major propaganda arm of the Syrian “resistance.” Falsely claiming to be a humanitarian rescue and relief organization, the White Helmets produced carefully edited films of “heroism under fire” that have been released worldwide. The films conceal the White Helmets’ relationship with the al-Qaeda affiliated group Jabhat al-Nusra and its participation in the torture and execution of “rebel” opponents. Indeed, the White Helmets only operated in rebel held territory, which enabled them to shape the narrative both regarding who they were and what was occurring on the ground.

The White Helmets travelled to bombing sites with their film crews trailing behind them. Once at the sites, with no independent observers, they are able to arrange or even stage what was filmed to conform to their selected narrative. Perhaps the most serious charge against the White Helmets consists of the evidence that they actively participated in the atrocities, to include torture and murder, carried out by their al-Nusra hosts. There have been numerous photos of the White Helmets operating directly with armed terrorists and also celebrating over the bodies of execution victims and murdered Iraqi soldiers. The group’s jihadi associates regard the White Helmets as fellow “mujahideen” and “soldiers of the revolution.”

Some White Helmets continue to operate in Syria’s terrorist-controlled Idlib province, raising the question whether the United States is prepared to give more taxpayer derived money directly to terrorists. Several months ago, as the Syrian Army closed in on some of the other pockets where the White Helmets operated, the U.S. and Israel mounted an operation to evacuate many of them. Some of them and their families were moved to Israel and Jordan and many of them have wound up in Canada. If the White House again does a flip-flop and pulls the plug on the money earmarked for them it would truly be a welcome sign that the U.S. has realized that the game is over and its direct involvement in Syria should be ended.

Syria, Trump and the Kurds, interview with Tim Anderson

0 thoughts on “An Imperfect Bit of Statecraft”