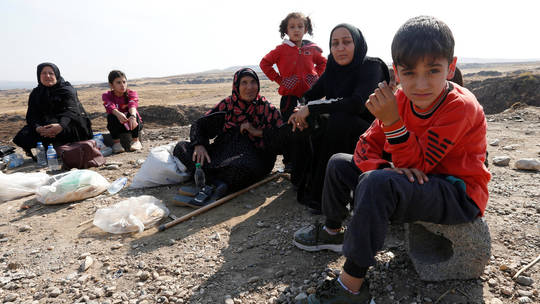 Russia has pulled off an impressive security deal to avoid escalation of violence and war in Syria. It’s a win-win formula for peace, drawn up by Russia and Turkey. Arguably, the luckiest beneficiary is US President Donald Trump.

Although, you wouldn’t think that listening to Trump’s trumpeting about the latest ceasefire, worked out by Russia and Turkey. The American leader arrogated all praise for the peace accord as being “an outcome created by us, the United States… No other nation did this.”

In Trump’s vainglory, he reckons his dubious policy shift earlier this month, which many saw as a shameful betrayal of the Kurds, was the precursor for the Sochi memorandum creating a new peace corridor in northeast Syria, to be overseen by Russia, Turkey, and Syrian state forces.

It’s like someone who throws down a basket of eggs. Then, when someone else comes along and somehow turns the mess into an omelette, the original wrecker slaps himself on the back for being a gourmet chef.

Just before Russian President Vladimir Putin and his Turkish counterpart Recep Tayyip Erdogan signed the Sochi memorandum this week, Ankara was threatening to renew its offensive against Kurdish militants in northeast Syria whom it regards as “terrorists”.

The offensive, which began on October 9, was partially halted last week for a five-day period at the behest of the United States, to give its former Kurdish allies time to vacate from a “safe zone” inside Syria which had been demanded by Turkey. It was a shaky arrangement, with both Turkish and Kurdish sides blaming the other for violations.

That US-brokered truce was about to collapse this week only for Moscow to produce an innovative and more stable formula for maintaining peace. Russia and Turkey are endeavoring now to form joint security patrols along the border, while Syrian state forces are given control over other sections, which they had previously been deprived of doing by the presence of the US-backed Kurdish militia. Syria’s President Assad signed off on the Sochi deal after being briefed by Putin. The Russian-brokered ceasefire gives the Kurdish militia one more week to complete their relocation south beyond the 30-km buffer zone requested by Ankara.

So, Turkey gets its security guarantees without further incursion into Syria. The Syrian government regains control of much of its sovereign territory without having to go to war with Turkey. The Kurds are assured of not being slaughtered by a Turkish invasion, although they will have to cede their ambitions of a state separate from Syria.

Henceforth, the Syrian Kurds will have to engage in negotiations with the central government in Damascus in order to create a mutually acceptable devolved administration for the Kurdish region.

The Sochi memorandum, signed by Russia and Ankara, underscores the need to get on with the political process of a new constitutional settlement in Syria, which no doubt will involve mapping out a future for the Kurds within the sovereign and intact state of Syria.

As for President Trump, he has been spared a debacle which threatened to shred his and America’s reputation internationally.

Trump had effectively given Turkey a green light on October 6 to invade northeast Syria; the American president made the surprise announcement that US forces in Syria would no longer protect Kurdish militants whom they had been aligned with for nearly five years.

There was a hue and cry within the US and internationally over what was deemed to be Trump’s blithe betrayal of the Kurds. Trump appeared to acquiesce to Erdogan with his typical transactional calculus of saving costs from paring American troop numbers in Syria, as well as using the move as an electioneering opportunity, whereby the president could claim he was “bringing our troops home.”

However, Trump’s calculation backfired spectacularly. He was condemned by Republicans and Democrats for bringing shame on America by abandoning the Kurds. Former US military chiefs were also lambasting the erratic commander-in-chief, with one admiral in an op-ed for the New York Times calling for Trump’s ejection from the White House. It was tantamount to inciting a coup.

A security calamity in Syria was looming from Trump’s overrated art of the deal. Tens of thousands of civilians were forced to flee their homes to avoid the Turkish onslaught which also involved Turkish-backed militants belonging to disparate groups under the umbrella name of Syrian National Army (formerly Free Syrian Army). There were fears of ethnic cleansing against the Kurds by these Turkish proxies.

The ceasefire negotiated last week with Erdogan by Vice President Mike Pence and Secretary of State Mike Pompeo – who both hurriedly flew to Ankara on a damage-limitation mission – was like a sticking plaster for a potential hemorrhage. An all-out war was also on the cards between Turkey and Syria after Damascus denounced Ankara’s “aggression”.

Only the day before the Sochi agreement was signed, the Trump administration’s special envoy to Syria, James Jeffrey, testified to the House of Representatives that the country was hurtling towards chaos and sharper conflict. Jeffrey told a congressional panel about alleged war crimes committed by Turkish forces. He also said the turmoil allowed hundreds of Islamic State (IS, formerly ISIS) prisoners and other al Qaeda-type jihadists to go free.

Trump’s feckless policymaking was threatening to tarnish his presidency with complicity in a genocide and possibly a new war in the Middle East between Syria and Turkey. Kurdish military commander Mazloum Abdi decried that his people were being thrown to the mercy of genocide by the US. Yet, Trump this week declared he saved the Kurds, adding that General Mazloum thanked him profusely.

The US president claimed“countless lives are being saved… because we have done something very, very special.”

In his White House address to the nation, taking full credit for the Russia-brokered ceasefire, Trump ranted about the proposed safe zone. It is worth studying his ignorance of history and lack of understanding about American forces illegally present in Syria.

“Thousands and thousands of people have been killed in that zone over the years. But it’s been sought for many, many decades… Turkey, Syria and all forms of the Kurds have been fighting for centuries. We have done them a great service and we’ve done a great job for all of them. And now we’re getting out. Long time. We were supposed to be there for 30 days. That was almost 10 years ago… Let someone else fight over this blood-stained sand.”

The vacuousness of Trump’s words is astounding. The way he tells it, Washington has benevolently done its best to keep warring tribes apart, and now must leave because the chivalrous American knight is weary of internecine barbarity.

How about just acknowledging the US’s criminal regime-change wars have created bloody mess after mess in the Middle East?

Trump was near falling face-first into a mess of his own making. He was spared because of Russia’s responsible diplomacy. But, in his delusional ignorance, Trump basks in the glory of another’s achievement.