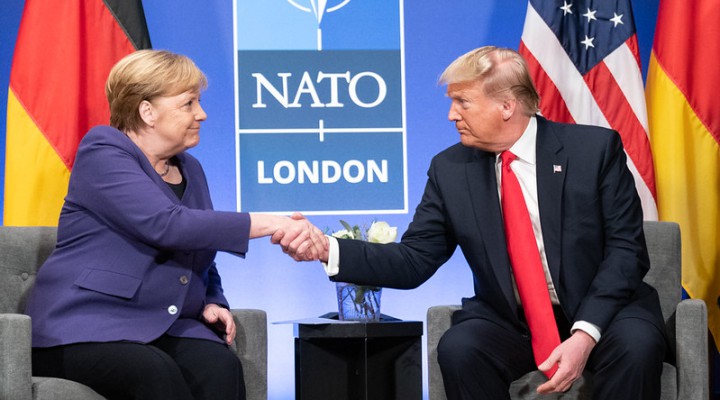 The continued presence of tens of thousands of American military personnel in Europe seventy-five years after the end of the Second World War is rarely questioned either by politicians or the mainstream media. Currently there is little recollection of how, after the war ended, soldiers from Britain, France, the U.S. and the Soviet Union occupied Germany, each in a designated zone. Germany’s capital Berlin was divided into four sectors, each with a foreign military occupying force. I was a part of that occupation force from 1968 through 1971, serving in the U.S. Army’s Berlin Brigade as part of the 430th Military Intelligence Detachment.

The initial intention to keep postwar Germany in check morphed into the Cold War with the Soviets. The Soviet sector of Berlin became the capital of communist East Germany while the U.S. led efforts to create a military union based in Western Europe that would resist further Russian expansion. That alliance became the North Atlantic Treaty Organization (NATO) in 1949, a structure that incorporated the newly minted Federal Republic of Germany, and the Soviets countered with the Warsaw Pact that included nearly all of Eastern Europe. Both the Organization and Pact were ostensibly defensive alliances and the U.S. active participation was intended to demonstrate American resolve to come to the aid of the Europeans. The Cold War between the two alliances continued until 1991 when the Soviet Union collapsed. Germany was reunited, the Berlin wall was torn down, the foreign troops went home and the city again became the country’s capital.

During my time in Germany the Cold War was decidedly hot, having relatively recently witnessed the Russian denial of Berlin’s occupied city status shared among the four victorious nations by building a wall and confronting U.S. forces at the new border crossing points. My recollection is that in 1970 there were more than 10,000 GIs in Berlin alone and about 200,000 more stationed in West Germany.

Today there are approximately 36,000 American soldiers and airmen based in a reunited Germany but President Donald Trump decided in early June to withdraw 9,500 of them and to also cap the total U.S. military presence in that country at 24,000, which would involve 2,500 more cuts and might go even deeper depending on what is eventually included in the numbers. Preliminary planning suggests that about 5,600 will be repositioned to other NATO countries, including Italy, Belgium and Poland, while 6,400 will be returned to the U.S., from which point they might go on to the Pacific theater to confront “Chinese ambitions.” Unlike previous Trump pronouncements on reductions in force in Afghanistan and Syria, neither of which has actually been achieved, this latest move regarding Germany appears to be serious.

As some of the soldiers that are being re-positioned elsewhere in Europe will undoubtedly be closer to the border with Russia, there should be no doubt but that the Kremlin is still the designated enemy. Whether Russia is an actual threat is questionable and many observers privately believe that NATO is an anachronism, kept going by the many statesmen and military establishments of the various countries that have a vested interest in maintaining the status quo.

In spite of the clearly diminished threat in Europe, NATO has expanded to 30 members, including most of the former communist states that made up the Warsaw Pact. The most recent acquisition was Montenegro in 2016, which contributed 2,400 soldiers to the NATO force. Since the demise of the Warsaw Pact, NATO has found work in bombing Serbia, destroying Libya and in helping in the unending task to train an Afghan army, tasks which were not envisioned when the treaty was signed in 1949.

Trump has also stated his intention to move the European Headquarters of U.S. forces from Stuttgart in Germany to Mons, near Brussels in Belgium. The move would seem to make some limited sense as NATO headquarters is also in Brussels, but there is also a political dimension to it. Trump has been sending the not unreasonable message that if the Europeans want more defense, they should pay for it themselves, though he has wrapped his proposal in his usual insulting and derogatory language. A wealthy Germany currently spends 1.1% of GDP on its military, far less than the 2% that NATO has declared to be a target to meet alliance commitments. That compares with the nearly 5% that the U.S. has been spending globally, inclusive of intelligence and national security costs.

Trump might actually have a reasonable U.S. perspective on the burden sharing issue, but the European concern is more focused on how Trump does what he does. For example, he announced the downsizing in June without informing any of America’s NATO partners. The Germans were surprised and pushed back immediately. German Foreign Minister Heiko Maas regretted the planned withdrawal, describing Berlin’s relationship with the Washington as “complicated.” Chancellor Angela Merkel was reportedly shocked. And Trump made matters worse last week when he tweeted “Germany pays Russia billions of dollars a year for Energy, and we are supposed to protect Germany from Russia” before maladroitly observing that “The United States has been taken advantage of for 25 years, both on trade and on the military. We are protecting Germany. So we’re reducing the force because they’re not paying their bill. It’s very simple: They’re delinquent. Very simple.”

The timing of the decision has also been questioned, with many observers believing that Trump deliberately staged the announcement to punish Merkel for refusing to attend a planned G-7 Summit in the U.S. that the president had been trying to arrange. Merkel argued that dealing with the consequences of the coronavirus made it difficult for her to leave home and the G-7 planning never got off the ground, which angered Trump, who wanted to demonstrate his global leadership in an election year.

Predictably, the Democrats and also some Republicans are piling on Trump over the decision. Joe Biden sees a “profound problem” in the withdrawal while Senator Bob Menendez of the Senate Foreign Relations Committee quipped “Champagne must be flowing freely this evening at the Kremlin.” Republican Mitt Romney declared the move to be “grave error…a slap in the face at a friend and ally when we should instead be drawing closer in our mutual commitment to deter Russian and Chinese aggression. The move may temporarily play well in domestic politics, but its consequences will be lasting and harmful to American interests.”

The limited reduction in force actually makes no sense if one believes that NATO itself should instead be terminated due to its lacking any credible threat from Russia or from anyone else. A recent opinion poll suggests that keeping U.S. troops in Germany is not considered desirable by the Germans themselves, only 15% of whom support their remaining on national security grounds. And moving troops to Belgium and Italy is going in the wrong direction if one actually considers that there is an active threat from Moscow.

Nor does moving soldiers from one country that is behind on its 2% “dues” to NATO to other countries that are likewise in arrears make any practical sense but for a president who feels personally affronted by a foreign leader and is choosing to react petulantly as punishment. The disruption to U.S. military facilities that currently provide support to elements in Africa and the Middle East will be considerable, and the move will also not be cost-free. According to the New York Times, “Repositioning the troops will cost several billion dollars. The withdrawal and shifting of forces is likely to take months, if not years.”

And, of course, the real kicker is that if Joe Biden is elected president in a little less than three months the whole planned move will be scrapped by the victorious and persistently warlike Democrats. No wonder Americans’ trust in the rationality of their government is at an all time low.

0 thoughts on “American Troops to Leave Germany: Is It Goodbye or Just Auf Wiedersehen?”