HOME / WORLD / Trump claims the redeployment of US troops from Germany to Poland is a ‘signal’ to Russia. But is it just a tempest in a teapot? 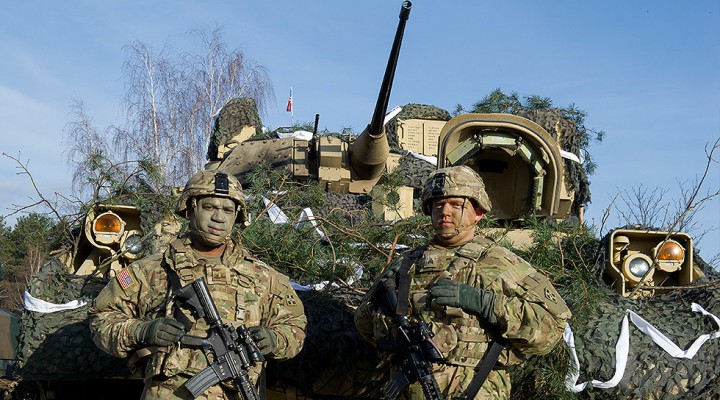 President Trump has announced that thousands of US troops will be redeployed to Poland as part of a drawdown of US forces in Germany. However, this plan’s a political hot potato, and its future is very much in doubt.

The Rose Garden provided the backdrop for the visit of Polish President Andrzej Duda, the first by a foreign head of state to the US since the outbreak of the coronavirus pandemic. At a joint press conference, President Trump addressed reports that the US was planning to withdraw some 9,500 troops from Germany. “We’re going to be reducing our forces in Germany,” Trump said. “Some will be coming home, and some will be going to other places.”

For his part, President Duda spoke up in defense of a US military presence in Europe, noting that any effort to send all of the troops scheduled to be pulled out from Germany back to the US “would be very detrimental to European security,” adding “It’s deeply justified to ensure that US troops are left in Europe.” Duda noted that “the American presence since the end of World War II is a huge security guarantee. If I’m asked by anybody [whether] Poland [would] receive more US troops in our country, [I’d say] of course, I’m ready.”

Trump’s decision to cut US troop numbers in Germany is a direct response to Germany’s inability or unwillingness to meet a 2 percent GDP threshold in defense spending. His willingness to divert some of these troops to Poland likewise suggests frustration over Russia’s Nord Stream 2 pipeline, which is nearing completion, despite US sanctions designed to cripple the project.

“It sends a very strong signal to Russia,” Trump said, “but I think a stronger signal … is the fact that Germany is paying Russia billions of dollars to purchase energy … through the pipeline.” As with any politically motivated “signal,” however, the devil is in the details. And here the narrative of US troops deploying to Poland hits a snag.

Since the announcement of US plans to withdraw troops from Germany in mid-June, there has been widespread speculation in the European and US press that at least some of those troops could be redeployed to Poland. The basis for such speculation was grounded in part in a White House meeting in June 2019, at which Trump and Duda discussed the possibility of dispatching some 1,000 US personnel to Poland, where they would be housed in a Polish-provided base the two leaders jokingly referred to as “Fort Trump.”

However, “Fort Trump” proved to be stillborn. Poland was not keen on providing any troops stationed on its soil with the kind of enhanced immunity from prosecution that the US insisted on as part of any status-of-forces agreement. Even if this issue could have been resolved, controversy then arose as to where to place the base. Poland wanted the US troops to be stationed on its border with Belarus, while the Trump administration, concerned that such an act would be construed by Russia as unduly provocative, proposed stationing the troops further to the west, near Poland’s border with Germany. In the end, the economic impact of the coronavirus pandemic on the Polish economy made the $2 billion-plus price tag associated with its construction unsustainable.

That was then; this is now. In comments made following Duda’s visit, Trump expounded on the transfer of US troops from Germany to Poland. “Poland is one of the few countries that are fulfilling their obligations under NATO – in particular, their monetary obligations. And they asked us if we would send some additional troops. They’re going to pay for that. They’ll be paying for the sending of additional troops, and we’ll probably be moving them from Germany to Poland.” Money, it seemed, was no longer a problem.

The current plan to redeploy US forces from Germany to Poland falls outside of the 1,000 troops planned for “Fort Trump.” Those forces – which were to comprise a division headquarters, a combat-training center, a drone squadron, and the infrastructure necessary to support a heavy-armor brigade that would be rotated in and out of the country on a regular basis – are separate from the additional 1,000 troops earmarked from the German withdrawal.

Complicating the issue further is the fact that the US has yet to specify which of the 35,000 troops currently based in Germany would, in fact, comprise the 9,500 earmarked for withdrawal, and whether they would comprise combat forces, combat service support, or garrison troops. Without knowing this breakdown, it’s impossible to predict the precise composition of the additional 1,000 that would be sent to Poland above and beyond the 1,000 previously identified under the 2019 plan.

And then there’s the issue that the Trump-Duda meeting is taking place just a few days before a national election in Poland. Duda is in a decidedly tight race for reelection. Many observers have deemed his White House visit a blatant vote-winning ploy, and his pledge to pay for the redeployment of US troops little more than crude electioneering. There’s a real possibility that Duda will fail to win a plurality in the election, scheduled for June 28, forcing a runoff election in July. And that could place his promise of support for the basing of American troops on Polish soil at risk, should popular opposition to such a move materialize among the electorate.

With the national economy suffering as a result of the coronavirus pandemic, there may not be significant public support for an expensive basing deal with the US at a time when the Polish people are in need. Indeed, the 2019 “Fort Trump” proposal collapsed earlier this month for that very reason, and there’s no indication that Duda’s willingness to accept 1,000 additional US troops today would alter that reality. Moreover, as mentioned, the US has yet to conclude a comprehensive defense agreement with Poland that includes an acceptable status-of-forces immunity provision. That’s a show-stopper for the US, and a highly sensitive issue for the Poles, especially during a highly contested presidential election.

As currently configured, the proposed redeployment of US troops from Germany to Poland is little more than a verbal agreement. It lacks discernable substance, and was issued in a highly contentious political environment. There are numerous obstacles to the plan in Poland, primarily in the form of the election.

Likewise, Trump can expect to have this decision come under scathing attack from Democrats and Republicans alike in Congress, who have threatened to withhold funding from the Pentagon should Trump go through with the planned troop withdrawal from Germany. In the end, the Trump-Duda plan to base additional US troops on Polish soil is more political theater than geopolitical reality – a veritable tempest in a teapot that will more than likely blow over and be forgotten before summer comes to a close.

0 thoughts on “Trump claims the redeployment of US troops from Germany to Poland is a ‘signal’ to Russia. But is it just a tempest in a teapot?”