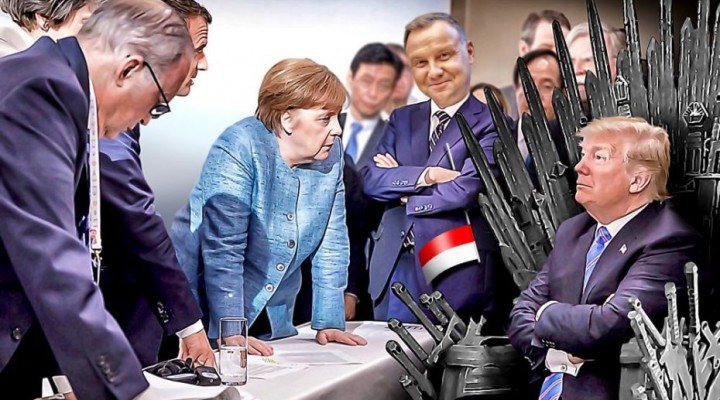 The latest kerfuffle about Trump purportedly taking troops out of Germany is merely reactionary wheels-within-wheels of a bigger and systematic hostile US posture towards Russia.

President Donald Trump’s reported order to withdraw nearly 10,000 US troops from bases in Germany has engendered frissons of angst about the future of NATO, the transatlantic relationship, and European security. The most preposterous reaction came from American and European security officials who called the move a “gift to Putin”.

All the media excitement is sound and fury signifying little. Trump’s troop drawdown is not a gift to Russia. Rather, it is more an expression of rift and a temper tantrum by Trump, with little intended strategic consequence.

For a start, the news of withdrawing American forces from Germany – about a third of the current total of 35,000 – was not officially announced by the White House nor the Pentagon. It was first reported on June 5 by the Wall Street Journal attributed to administration sources. In other words, it has the hallmark of a leak with a political or personal agenda. That suggests the “news” came from President Trump and his clique, including the mischievous former US ambassador to Germany, Richard Grenell.

Incredibly, neither the Pentagon nor the German government were officially informed about what would be a momentous troop movement, given that US troops have been stationed in Germany since the end of World War Two. The country houses the largest US bases in Europe. It is therefore a cornerstone to the NATO alliance.

The lack of formal communication indicates that Trump’s purported order was more motivated by pique and caprice than signifying a strategic shift in US forces away from Europe, or, as the president has himself several times threatened to do before, to walk away from NATO. The latter notion touted by Trump in his obsession over squeezing European military budgets is nothing but bombast and bluff, given the structural importance of NATO to American power projection. Transactional money-obsessed Trump probably doesn’t even understand the strategic picture of how NATO and Germany are a vital European bridge for US imperialism.

Secondly, Trump’s record shows that he is all talk and no action when it comes to removing troops. He made a big fanfare about US soldiers coming home from Syria and Afghanistan, yet nearly a year on from those promises there have been no discernible drawdowns.

Even if there was a credible plan to take US troops out of Germany, that doesn’t mean American forces are reducing their footprint across Europe. Under Trump there has been a continued build-up of US forces in the Baltic states with greater emphasis on rotational presence of brigades. His envoys in Europe have also dangled the idea of relocating US forces from Germany to Poland. Given the Russophobic politics of Poland and the Baltic states, the ostensible troop drawdown from Germany would hardly be a “gift” to Russia.

So, what is going on?

Trump seems to be delivering a snub to German Chancellor Angela Merkel as well as to his own Pentagon chiefs.

Several reports indicate that Trump was enraged by Merkel’s decision to skip on a G7 summit to be hosted in Washington by the American president later this month. Her decision reported last week was said to be made in light of coronavirus concerns and also due to Merkel’s misgivings over Trump’s earlier order to pull US funding from the World Health Organization. A few days after Merkel’s reported reluctance to attend the G7 summit the WSJ then reported the news of Trump’s troop pullout plan from Germany. Adding to the sense of retaliation was the astounding fact that Berlin was not consulted or informed in advance. That suggests the aim was to belittle Berlin as much as possible.

The second front of Trump’s malice involves the Pentagon. As Associated Press reported this week the president’s relations with his military chiefs is near “breaking point”. The acrimony is due to the pushback by current and former Pentagon officials over Trump’s threats to deploy the military to curb mass protests against police violence and the killing of African-American man George Floyd in Minneapolis last month.

Defense Secretary Mark Esper and Chairman of the Joint Chiefs of Staff Mark Milley have both balked at the president’s call for combat troops to be sent on to the streets of the capital and other cities to quell the protests. Trump has reportedly engaged in “shouting matches” with his senior military officials over their refusal to commit troops in large numbers. The reluctance by the Pentagon is no doubt motivated by apprehensions that such a move could inflame an already volatile situation and provoke mass insurrection.

Knowing Trump’s notoriously thin skin and insatiable ego, the perceived rejection by Merkel over the proposed G7 summit, followed by the Pentagon brass giving a cold shoulder to his domestic executive power display, that had the combined effect of Trump’s hasty leak about taking US troops out of Germany. The move is therefore all about Trump trying to pull rank on America’s German vassal and poking the US generals in the eye.

It is doubtful that the knee-jerk move has any intended strategic significance. Certainly it is not a “gift” to Russia, as some Trump opponents have hyperventilated about.

Just look at the intensifying sanctions belligerence under Trump on Russia over the Nord Stream 2 natural gas project, and the ongoing US-led NATO build-up against Moscow. The latest kerfuffle about Trump purportedly taking troops out of Germany is merely reactionary wheels-within-wheels of a bigger and systematic hostile US posture towards Russia.