HOME / WORLD / US-German relations are beyond repair as result of decades-long clash of views & ideas. Troop pullout is only a symptom 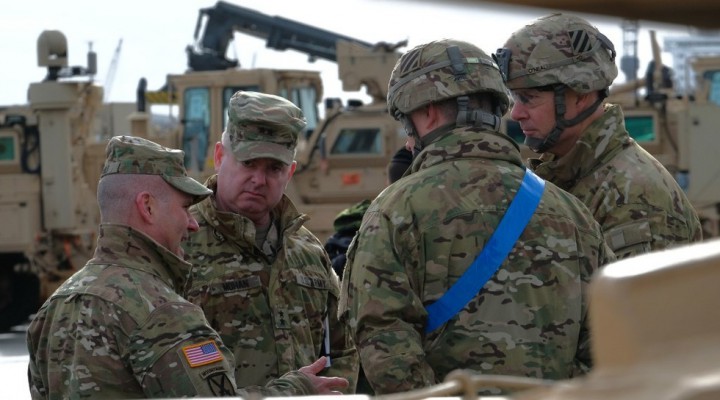 While the Trump administration sells the decision to withdraw US troops from Germany as a strengthening of NATO force alignment, the reality is it’s merely the latest manifestation of a relationship on the decline for decades.

The announcement by Secretary of Defense Mike Esper that the US has finalized plans for the withdrawal of some 12,000 troops from Germany came as a surprise to no one. This decision, minus the details concerning implementation, was originally announced back on June 30. At that time, President Donald Trump linked it to the failure of Germany to meet its obligation regarding meeting NATO goals of defense spending matching 2% GDP (German levels for 2019 were around 1.4%). However, in announcing that, of the 36,000 forces permanently stationed in Germany, 24,000 would remain while 11,900 will deploy elsewhere or return home, Esper did not mention Germany’s budgetary arrears, instead linking the decision to new US defense priorities driven by the need for better deterrence of Russia and China.

National security experts on both sides of the Atlantic will be debating the genesis of the US troop withdrawal for some time to come, trying to assign weight to the competing justifications offered by Trump and Esper. The reality, however, is that this decision was a long time in coming, with its roots not so founded in any personal animus on the part of President Trump or strategic force re-posturing by the US. The current crisis is derived from a larger US-German dysfunction that has been in place for decades, driven by inherently incompatible world visions and value systems, and the inevitable clash between American exceptionalism and German ideals based on the principle of European sovereignty.

The notion that US-German relations during the pre-Trump era were exclusively cordial and free of controversy or recrimination is belied by the facts. The Cold War was largely defined by the division of Germany into East and West, and the resulting debate about German reunification between the US and the Soviet Union. As a battleground state, West Germany struggled with the danger of US ambivalence, as witnessed during the Berlin crises of the late 1950s and early 1960s, plus US overreaction in the form of war plans involving the use of nuclear weapons on German soil. While West Germany was a staunch NATO ally during this time, its insistence on an effective forward defense of its territory created friction amongst its cohorts, who believed that a defense in depth, which traded German territory for time needed to reinforce, represented the best way of defeating a Soviet-led invasion of the West.

The Ostpolitik policies of Chancellor Willy Brandt likewise frustrated US and NATO leaders, who saw West Germany’s efforts at détente with the Soviet Union, East Germany and other East Bloc European nations as a symptom of greater German independence from the dictates of NATO and the West. West Germany was ground zero for the anti-nuclear movement that swept Europe in the early 1980s following the US’ effort to deploy intermediate-range nuclear missiles onto European soil. This came in response to the Soviet deployment of SS-20 missiles, which triggered the collapse of the government of Chancellor Helmut Schmidt due to a vote of no confidence.

While the signing of the Intermediate Nuclear Forces (INF) treaty in 1987, and the fall of the Berlin Wall and subsequent German reunification in 1989, helped repair US-West German relations, the US involvement in the Gulf War in 1990-91 did not receive German support. While Germany rallied behind the US in the aftermath of the 9/11 terrorist attacks, this support did not extend to the US’ decision to invade Iraq in 2003; German recalcitrance prompted then-Secretary of State Donald Rumsfeld to belittle Germany as part of “Old Europe.” Gerhard Schroeder, who served as German chancellor from 1998-2005, worked towards closer relations with Russia, especially in the field of energy – an action that raised the hackles of the US government.

When President Barack Obama took office in 2009, many Germans believed that he would usher in an era of improved relations that coalesced around common ideals and values, only to be disappointed by the reality that the problems souring US-German relations were larger than one man. Successive spy scandals in 2013 and 2014 involving eavesdropping by the US on Chancellor Angela Merkel’s cellphone, and the recruitment by the CIA of senior German officials, only confirmed to many Germans the reality that the US did not view their nation as a friend, but rather a potential adversary. The US’ use of military bases in Germany to conduct armed drone attacks against targets in the Middle East likewise drew the ire of many Germans, who believed their sovereignty was violated by such actions.

Seen in this light, the deterioration of US-German relations under President Trump is not a new phenomenon, but rather a continuation of a decades-long slide which finds the two nations at odds over critical policy issues involving international peace and security, European independence, and relations with Russia. While Germany continues to believe that its membership in the NATO alliance is essential for European security, this stance is strained by what it views as US unilateralism and exceptionalism at the expense of European values and interests. Given the current trajectory of relations, one has to wonder how long NATO can survive under such conditions.

The decision by Secretary Esper to begin the process of withdrawing US forces from Germany is not the last word on the subject. The task of moving major command elements, combat units, and combat service support units – along with their respective civilian and dependent infrastructure – is a daunting one that will take weeks, if not months, to implement. The reality is that if Trump fails to secure reelection in November 2020, a Biden administration would be able to reverse much, if not all, of the planned withdrawal. In doing so, however, the new leadership would be confronted with the reality that the damage to US-German relations is beyond repair. They would also realise any actions they might take to appease Germany would run afoul not only of Congress, which opposes the German-Russian Nord Stream 2 pipeline project, but also the former eastern-bloc nations of NATO, such as Poland, the Baltics, Romania and Bulgaria, which view the force restructuring ordered by Secretary Esper as essential to their individual national security interests – the rest of the NATO alliance be damned.

Trump’s actions in ordering the withdrawal of US troops from Germany are more the byproduct of a dysfunctional US-German relationship that has been devolving for decades than they are of any grand NATO realignment against Russia or personal animosity between Trump and Angela Merkel. The worsening relationship between the two countries is tied to a clash between American exceptionalism and German notions of European sovereignty, which no US or German leader can paper over with gestures and speeches. It is a manifestation of the geopolitical disharmony that has existed in Europe and the world in the aftermath of the dissolution of the Soviet Union in 1991, and the US’ decision to fill the resulting vacuum as the unilateral global superpower.

The gradual degradation of American military, diplomatic and economic power in the three decades that followed this event is the principal driving force behind the US-German split, and with it the decline in the relevance and authority of the NATO trans-Atlantic alliance. No amount of reshuffling of American military assets can undo this reality.

One thought on “US-German relations are beyond repair as result of decades-long clash of views & ideas. Troop pullout is only a symptom”