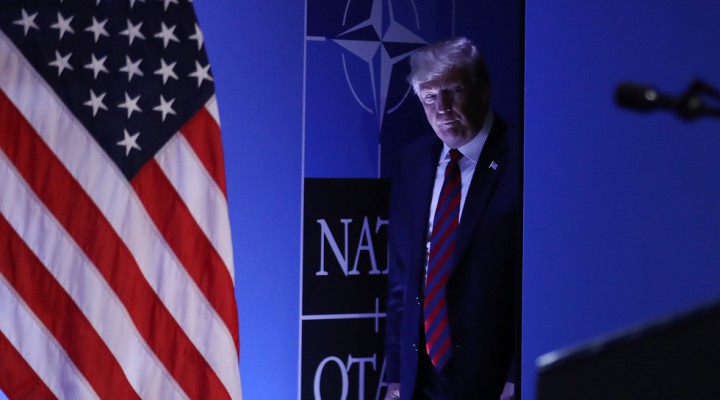 By calling out Germany for failing to pay its fair share of the cost of NATO, US President Donald Trump has challenged the legitimacy of the foundational premise upon which the alliance was built. This is a good thing.

A group of international academics, during a recent conference at the US Center for Strategic and International Studies, have concluded that a second Trump term in office could fatally weaken the North Atlantic Treaty Organization (NATO), the transatlantic alliance charged with deterring perceived Russian aggression and protecting the international rules-based order that has dominated international relations since the end of the Second World War. This conclusion came on the heels of a decision by the Trump administration to withdraw some 9,500 troops from Germany as punishment for Berlin’s failure to keep a promise to raise its defense spending to levels matching two percent of its GDP.

Trump’s actions, and the concerns of the international academics about the possible demise of NATO, are perhaps best evaluated in the context of an observation made by NATO’s first secretary general, Lord Ismay, that the purpose of alliance was “to keep the Russians out, the Americans in, and the Germans down.” Ismay’s statement, made in 1952 – three years after the founding of NATO – reflected the false pretense upon which the post-war order was based. It also reflected the intellectually vacuous premise of NATO’s role in protecting the same as justification for the continued existence of an alliance founded on a lie and sustained on misguided principles sustained by that lie.

Russia was never a threat

“Keeping the Russians out” has always been a logical fallacy. The fact is that Russia in circa 1949 – the year NATO was founded – posed no military threat to either the US or Western Europe. Moreover, the US and its allies knew this. A report prepared by the Division of Research for Europe, Office of Intelligence Research, Department of State, dated July 1, 1949, noted that “it appears unlikely that the Kremlin will deliberately precipitate a major conflict, or – barring the ever present possibility of miscalculation – undertake an adventure which would involve an obvious and real risk of precipitating a major conflict.”

Even when the Soviet Union perfected the ability in the late 1970s to launch offensive military operations capable of defeating NATO forces within a week (the so-called “Seven Days to the Rhine” plan), this was in response to the build-up of NATO nuclear weapons and the corresponding Soviet concern that the alliance might seek to use such weapons in a pre-emptive attack against the Soviet Union and its Warsaw Pact allies.

In any event, with the fall of the Berlin Wall in 1989, the reunification of Germany in 1990, and the collapse of the Soviet Union in 1991, the mythology of a looming Russian military threat to Western Europe evaporated. NATO, however, could not survive in an environment void of an external threat from an expansionist Russian nemesis. The alliance, at the behest of the US, expanded its reach to the borders of Russia (despite multiple assurances given to Moscow that such actions would not be taken), while transforming itself from a defensive alliance to one which projected offensive military power in Europe and beyond.

This relentless search for an enemy worthy of a transatlantic alliance has brought the world full circle to a situation that parallels that which existed in July 1949. Russia is neither seeking nor is prepared for a major conflict with the West, and yet the NATO alliance projects alleged Russian intent as its raison d’etre, manufacturing a “Suwalki Gap” vulnerability designed to mimic that of the “Fulda Gap” during the Cold War. “Keeping Russia out” has never been a problem – Russia never wanted in. NATO, however, cannot justify its existence without a Russian threat, and so, yet again, one has been manufactured from crises of NATO’s own making.

The notion of “keeping Germany down” is reflective of another logical fallacy inherent in NATO’s existence. It was the West, through NATO, which sought to keep Germany divided and, moreover, to remilitarize West Germany. The timing of Lord Ismay’s pronouncement on NATO was contemporaneous with the so-called “Stalin Note,” a proposal from the Soviet leader to the US, France and Great Britain made in March 1952 calling for the reunification of a demilitarized Germany with no restrictions on its economic development. A unified, demilitarized Germany, however, did not conform to the “rules-based post-war order” envisioned by the US, since it created a viable political-economic entity which existed outside the umbrella of American military power.

While ostensibly building Germany up, the NATO policy of seeking confrontation with Russia actually continues the stated intent of Lord Ismay to “keep Germany down” by throwing a monkey wrench into German-Russian economic relations. The opposition to the Nord Stream 2 pipeline project is largely driven by Cold War-era thinking, which has Germany ceding strategic control of its economy and, by extension, that of all Europe, by becoming overly reliant on Russian gas. This kind of thinking ignores the fact that Russia depends on the economic benefits derived from the Nord Stream 2 pipeline for its own economic wellbeing, and any attempt by Russia to leverage influence by threatening gas supplies would be akin to slitting its own wrists.

One of the unspoken tenets of the so-called “rules-based post-war world order” is that the United States remains the supreme military power, projecting an umbrella of strength under which its allies will take shelter from threats, real and imagined. To justify the maintenance of such military capability in the aftermath of the Second World War, the US was compelled to over-hype a Soviet threat worthy of global containment. In addition to projecting a non-existent Soviet desire to occupy Western Europe, the US manufactured so-called “missile gaps” and “bomber gaps” that fueled an arms race with the Soviets of its own making. The US needed NATO as a justification for priming a post-war military industrial complex that underpinned American economic viability, and NATO needed a Russian threat to justify its continued existence.

The complex diplomatic dance needed to sustain Lord Ismay’s foundational premise of “keeping Russia out, Germany down and the US in” was carried out over the course of successive US presidential administrations, from George H.W. Bush through to Barack Obama. Only Trump has refused to play the game. By envisioning a world where the US and Russia could get along as friends, calling out the hypocrisy of the US continuing to pay the lion’s share of a bloated NATO budget, and re-examining America’s relationship with the world in a context other than simply preserving 75-year-old “rules,” Trump has challenged the very foundation of legitimacy NATO has manufactured for itself.

It has taken the Trump administration four years to strip away the veneer of legitimacy surrounding NATO. If re-elected, the reality is that a Trump administration, given four more years, will tear down the entire NATO edifice. Given that NATO was born on a false premise that has been artificially sustained for nearly 70 years, such an outcome cannot come soon enough.

NATO’s colonization of Ukraine under guise of partnership