HOME / WORLD / The world according to Vladimir Putin 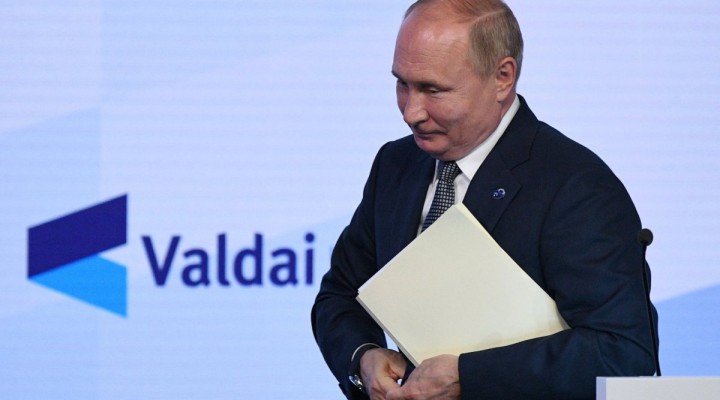 Russian president, in Sochi, lays down the law in favor of conservatism – says the woke West is in decline

The plenary session is the traditional highlight of the annual, must-follow Valdai Club discussions – one of Eurasia’s premier intellectual gatherings.

Vladimir Putin is a frequent keynote speaker. In Sochi this year, as I related in a previous column, the overarching theme was “global shake-up in the 21st century: the individual, values and the state.”

Putin addressed it head on, in what can already be considered one of the most important geopolitical speeches in recent memory (a so-far incomplete transcript can be found here) – certainly his strongest moment in the limelight. That was followed by a comprehensive Q&A session (starting at 4:39:00).

Predictably, assorted Atlanticists, neocons and liberal interventionists will be apoplectic. That’s irrelevant. For impartial observers, especially across the Global South, what matters is to pay very close attention to how Putin shared his worldview – including some very candid moments.

Right at the start, he evoked the two Chinese characters that depict “crisis” (as in “danger”) and “opportunity,” melding them with a Russian saying: “Fight difficulties with your mind. Fight dangers with your experience.”

This elegant, oblique reference to the Russia-China strategic partnership led to a concise appraisal of the current chessboard:

The re-alignment of the balance of power presupposes a redistribution of shares in favor of rising and developing countries that until now felt left out. To put it bluntly, the Western domination of international affairs, which began several centuries ago and, for a short period, was almost absolute in the late 20th century, is giving way to a much more diverse system.

That opened the way to another oblique characterization of hybrid warfare as the new modus operandi:

Previously, a war lost by one side meant victory for the other side, which took responsibility for what was happening. The defeat of the United States in the Vietnam War, for example, did not make Vietnam a “black hole.” On the contrary, a successfully developing state arose there, which, admittedly, relied on the support of a strong ally. Things are different now: No matter who takes the upper hand, the war does not stop, but just changes form. As a rule, the hypothetical winner is reluctant or unable to ensure peaceful post-war recovery, and only worsens the chaos and the vacuum posing a danger to the world.

A disciple of Berdyaev

In several instances, especially during the Q&A, Putin confirmed he’s a huge admirer of Nikolai Berdyaev. It’s impossible to understand Putin without understanding Berdyaev (1874-1948), who was a philosopher and theologian – essentially, a philosopher of Christianity.

In Berdyaev’s philosophy of history, the meaning of life is defined in terms of the spirit, compared with secular modernity’s emphasis on economics and materialism. No wonder Putin was never a Marxist.

For Berdyaev, history is a time-memory method through which man works toward his destiny. It’s the relationship between the divine and the human that shapes history. He places enormous importance on the spiritual power of human freedom.

Putin made several references to freedom, to family – in his case, of modest means – and to the importance of education; he heartily praised his apprenticeship at Leningrad State University. In parallel, he absolutely destroyed wokeism, transgenderism and cancel culture promoted “under the banner of progress.”

This is only one among a series of key passages:

We are surprised by the processes taking place in countries that used to see themselves as pioneers of progress. The social and cultural upheavals taking place in the United States and Western Europe are, of course, none of our business; we don’t interfere with them. Someone in the Western countries is convinced that the aggressive erasure of whole pages of their own history – the “reverse discrimination” of the majority in favor of minorities, or the demand to abandon the usual understanding of such basic things as mother, father, family or even the difference between the sexes – that these are, in their opinion, milestones of the movement toward social renewal.

So a great deal of his 40 minute-long speech, as well as his answers, codified some markers of what he previously defined as “healthy conservatism”:

Now that the world is experiencing a structural collapse, the importance of sensible conservatism as a basis for policy has increased many times over, precisely because the risks and dangers are multiplying and the reality around us is fragile.

Switching back to the geopolitical arena, Putin was adamant that “we are friends with China. But not against anyone.”

Geoeconomically, he once again took time to engage in a masterful, comprehensive – even passionate – explanation of how the natural gas market works, coupled with the European Commission’s self-defeating bet on the spot market, and why Nord Stream 2 is a game-changer.

During the Q&A, scholar Zhou Bo from Tsinghua University addressed one of the key, current geopolitical challenges. Referring to the Shanghai Cooperation Organization, he pointed out that, “if Afghanistan has a problem, the SCO has a problem. So how can the SCO, led by China and Russia, help Afghanistan?”

He also mentioned, indirectly, that the large Russian military base in Tajikistan is not a mere decorative prop.

Putin went back to the subject of Afghanistan during the Q&A, once again stressing that NATO members should not “absolve themselves from responsibility.”

He reasoned that the Taliban “are trying to fight extreme radicals.” On the “need to start with the ethnic component,” he described Tajiks as accounting for 47% of the overall Afghan population – perhaps an over-estimation but the message was on the imperative of an inclusive government.

He also struck a balance: As much as “we are sharing with them [the Taliban] a view from the outside,” he made the point that Russia is “in contact with all political forces” in Afghanistan – in the sense that there are contacts with former government officials like Hamid Karzai and Abdullah Abdullah and also Northern Alliance members, now in the opposition, who are self-exiled in Tajikistan.

Now compare all of the above with the current NATO circus in Brussels, complete with a new “master plan to deter the growing Russian threat.”

No one ever lost money underestimating NATO’s capacity to reach the depths of inconsequential stupidity. Moscow does not even bother to talk to these clowns anymore: as Foreign Minister Sergey Lavrov has pointed out, “Russia will no longer pretend that some changes in relations with NATO are possible in the near future.”

Moscow from now on only talks to the masters – in Washington. After all, the direct line between the Chief of General Staff, General Gerasimov, and NATO’s Supreme Allied Commander, General Todd Wolters, remains active. Messenger boys such as Stoltenberg and the massive NATO bureaucracy in Brussels are deemed irrelevant.

This happens, in Lavrov’s assessment, right after “all our friends in Central Asia” have been “telling us that they are against … approaches either from the United States or from any other NATO member state” promoting the stationing of any imperial “counter-terrorist” apparatus in any of the “stans” of Central Asia.

And still the Pentagon continues to provoke Moscow. Wokeism-lobbyist-cum-Secretary of Defense Lloyd “Raytheon” Austin, who oversaw the American Great Escape from Afghanistan, is now pontificating that Ukraine should de facto join NATO.

That should be the last stake impaling the “brain-dead” (copyright Emmanuel Macron) zombie, as it meets its fate raving about simultaneous Russian attacks on the Baltic and Black Seas with nuclear weapons.

0 thoughts on “The world according to Vladimir Putin”