HOME / WORLD / Putin keeps the door open for diplomacy with the US; too bad it’s falling on deaf ears 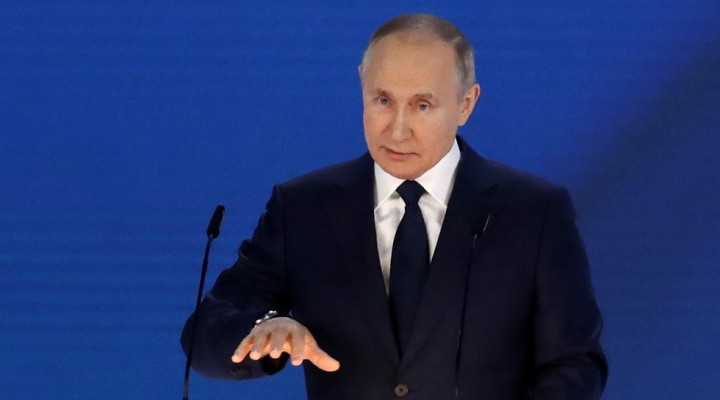 Putin warns of Russia’s ‘red lines’, comparing the West’s actions to ‘The Jungle Book’, but says Moscow doesn’t want to burn bridges with anyone. His message falls on deaf ears in the US, largely thanks to establishment media.

In his annual address to the Federal Assembly – the Russian parliament – President Putin devoted most of his time to domestic issues. His comments regarding national security and foreign affairs were brief, but telling.

While many pundits had predicted he would use the occasion to announce major actions that would signify a decisive break with the West in the aftermath of the US imposing a new round of economic sanctions, Putin, while lamenting the “unfriendly actions” and “outright rudeness” of the US and its allies, highlighted the fact that Moscow wants to maintain good relations with them.

Lest those in the West who were listening to the speech mistake Russia’s “good intentions as indifference or weakness,” Putin waxed poetic in putting down a marker that Russia would have none of it.

He alluded to Rudyard Kipling’s ‘The Jungle Book’ in describing the present situation vis-à-vis Russia and the West, observing that there are “all kinds of small Tabaquis [a reference to the sniveling jackal featured in the book] running around Shere Khan [a tyrannical Bengal tiger]… howling to gain the favor of their ruler.” While not naming names, Putin’s allusion is clear – the US (Shere Khan) and its Tabaquis (NATO) are harassing Russia (Mowgli, the unmentioned hero of the tale.)

The Jungle Book reference takes on a darker meaning when the Russian president warns those countries who have “made it a habit to pick on Russia,” that if “they want to burn bridges, or even blow up these bridges, they must know that Russia’s response will be asymmetric, swift and tough.”

It should be noted that in ‘The Jungle Book’, Tabaqui the jackal was killed by Mowgli’s allies, while Shere Khan died at the hands of Mowgli himself, led into a fiery trap – the ultimate form of asymmetrical combat.

To the would-be Shere Khans and Tabaquis listening to Putin’s address, the Russian president could not have made his message any clearer – do not provoke the Russian bear. “Russia has its interests which we defend and will defend within the framework of international law,” he declared.

While some observers have interpreted Putin’s brief comments on foreign and national security as ‘war-mongering’ and ‘bellicose’, it was anything but. Putin made it clear that diplomacy, not military action, was Russia’s preferred methodology, emphasizing Russia’s “good intentions” and its desire to keep the existing bridges linking it and the West open, as opposed to burning them down.

Putin’s posture was consistent with the evaluation contained in the US intelligence community’s Global Threat Assessment for 2021, which described Russian intent as follows: “We expect Moscow to seek opportunities for pragmatic cooperation with Washington on its own terms, and we assess that Russia does not want a direct conflict with US forces.”

The document further noted that “Russia seeks an accommodation with the United States on mutual noninterference in both countries’ domestic affairs and US recognition of Russia’s claimed sphere of influence over much of the former Soviet Union.”

There is no sunlight between this assessment and the tone and content of Putin’s address.

But to read the US media’s reaction to his speech, one would get the impression that America occupied an alternative reality where the constant threat posed to Russia by the real-life Shere Khans and Tabaquis of the world has been flipped, with the Russian government assuming the role of the predatory figure threatening the existence of ‘democracy’ – apparently personified in the form of the Western-backed opposition figure Alexey Navalny, and the perpetually victimized Ukraine.

While providing dismissive lip service to the content of Putin’s address, the Washington Post instead highlighted what it reported as “a wave of protests” which “started rolling across Russia’s Far East in support of imprisoned opposition leader Alexey Navalny.” The New York Times followed suit injecting the Navalny drama, while Newsweek took a different tack and ran an article with the inflammatory headline, “Ukraine President Zelensky Is Ready for War With Russia, Vows to ‘Stand to the Last Man.’” It covered a speech delivered by Volodymyr Zelensky as if it were the geopolitical equivalent of Putin’s address. “Does Ukraine want war?” Zelensky asked. “No. Is it ready for it? Yes,” he said, adding that while “Ukraine does not start a war first,” it “always stands to the last man.” Zelensky urged Putin to meet with him “anywhere in the Ukrainian Donbas where there is war” for peace talks.

By emphasizing Navalny and the conflict in the Donbass region while simultaneously giving short shrift to the content and intent of Putin’s address, the US media has continued a course which has sought to minimize Russian statesmanship and diplomacy in favor of a Hollywood-like narrative which paints that nation and its leader as the quintessential bad guys.

Given the role played by the US mainstream media in creating an environment that compels US leaders to craft policy which conforms to domestic political imperative as opposed to legitimate national security interests, this emphasis is unfortunate. The failure on the part of the US media, and by extension, the Biden administration, to recognize this reality is reflective of the suicidal hubris and arrogance that has gripped what passes for an understanding of modern-day Russia. Read ‘The Jungle book’; it’s not an ending any would-be Shere Khan should desire.

AN OPEN LETTER TO PRESIDENT PUTIN

0 thoughts on “Putin keeps the door open for diplomacy with the US; too bad it’s falling on deaf ears”