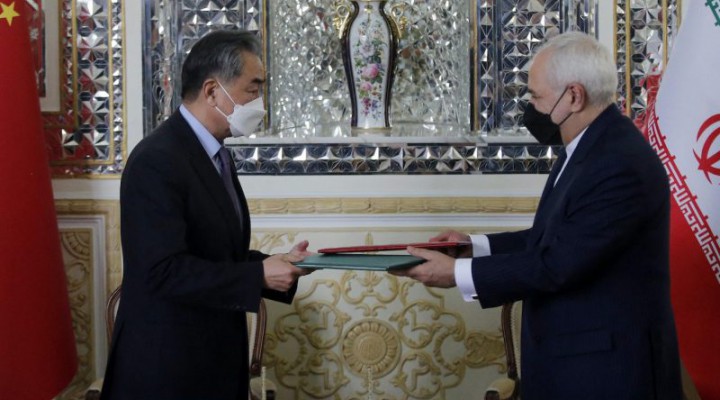 Capping an extraordinary two weeks that turned 21st century geopolitics upside down, Iran and China finally signed their 25-year strategic deal this past Saturday in Tehran.

The timing could not have been more spectacular, following what we examined in three previous columns: the virtual Quad and the 2+2 US-China summit in Alaska; the Lavrov-Wang Yi strategic partnership meeting in Guilin; and the NATO summit of Foreign Ministers in Brussels – key steps unveiling the birth of a new paradigm in international relations.

The officially named Sino-Iranian Comprehensive Strategic Partnership was first announced over five years ago, when President Xi Jinping visited Tehran. The result of plenty of closed-door discussions since 2016, Tehran now describes the agreement as “a complete roadmap with strategic political and economic clauses covering trade, economic and transportation cooperation.”

Once again, this is “win-win” in action: Iran, in close partnership with China, shatters the glass of US sanctions and turbo-charges domestic investment in infrastructure, while China secures long-term, key energy imports that it treats as a matter of national security.

If a loser would have to be identified in the process, it’s certainly the Trump administration’s “maximum pressure” drive against all things Iran.

As Prof. Mohammad Marandi of the University of Tehran described it to me, “It’s basically a road map. It’s especially important coming at a time when US hostility towards China altogether is increasing. The fact that this trip to Iran [by Foreign Minister Wang Yi] and the signing of the agreement took place literally days after the events in Alaska makes it even more significant, symbolically speaking.”

Iran’s Foreign Ministry spokesman Saeed Khatibzadeh confirmed the deal was indeed a “roadmap” for trade, economic and transportation cooperation, with a “special focus on the private sectors of the two sides.”

Marandi also notes how this is a “comprehensive understanding of what can happen between Iran and China – Iran being rich in oil and gas and the only energy-producing country that can say ‘No’ to the Americans and can take an independent stance on its partnerships with others, especially China.”

Marandi hits the heart of the matter when he confirms how the strategic deal actually secures, for good, Iran’s very important role in the Belt and Road Initiative (BRI):

The Chinese are getting more wary about sea trade. Even the incident in the Suez Canal reinforces that, it increases Iran’s importance to China. Iran would like to use the same Belt and Road network the Chinese want to develop. For Iran, China’s economic progress is quite important, especially in high-tech fields and AI, which is something the Iranians are pursuing as well and leading the region, by far. When it comes to data technology, Iran is third in the world. This is a very appropriate time for West Asia and East Asia to move closer to one another – and since the Iranians have great influence among its allies in the Mediterranean, the Red Sea, the Hindu Kush, Central Asia and the Persian Gulf, Iran is the ideal partner for China.

In a nutshell, from Beijing’s point of view, the astonishing Evergreen saga in the Suez Canal now more than ever reiterates the crucial importance of the overland, trade/connectivity BRI corridors across Eurasia.

It’s fascinating to watch how Wang Yi, as he met Ali Larijani, special adviser to Ayatollah Khamenei, framed it all in a single sentence:

“Iran decides independently on its relations with other countries and is not like some countries that change their position with one phone call.”

It’s never enough to stress the sealing of the partnership was the culmination of a five-year-long process, including frequent diplomatic and presidential trips, which started even before the Trump “maximum pressure” interregnum.

Wang Yi, who has a very close relationship with Iranian Foreign Minister Mohammad Javad Zarif, once again stressed, “relations between the two countries have now reached the level of strategic partnership” and “will not be affected by the current situation, but will be permanent”.

Zarif for his part stressed that Washington should get serious about its return to the Iran nuclear deal; lift all unilateral sanctions; and be back to the JCPOA as it was clinched in Vienna in 2015. In realpolitik terms, Zarif knows that’s not going to happen – considering the prevailing mood in the Beltway. So he was left to praise China as a “reliable partner” on the dossier – as much as Russia.

Beijing is articulating a quite subtle charm offensive in Southwest Asia. Before going to Tehran, Wang Yi went to Saudi Arabia and met with Crown Prince Mohammed Bin Salman. The official spin is that China, as a “pragmatic partner”, supports Riyadh’s steps to diversify its economy and “find a path of development that fits its own conditions”.

What Wang Yi meant is that something called the China-Saudi Arabia High-Level Joint Committee should be working overtime. Yet there have been no leaks on the absolutely crucial issue: the role of oil in the Beijing-Riyadh relationship, and the fateful day when China will decide to buy Saudi oil priced exclusively in yuan.

On the (Silk) road again

It’s absolutely essential to place the importance of the Iran-China deal in a historical context.

The deal goes a long way to renew the spirit of Eurasia as a geo-historic entity, or as crack French geopolitician Christian Grataloup frames it, “a system of inter-relations from one Eurasian end to another” taking place across the hard node of world history.

Via the BRI concept, China is reconnecting with the vast intermediary region between Asia and Europe through which relations between continents were woven by more or less durable empires with diverse Eurasian dimensions: the Persians, the Greco-Romans, and the Arabs.

Persians, crucially, were the first to develop a creative role in Eurasia.

Northern Iranians, during the first millennium B.C., experts on horseback nomadism, were the prime power in the steppe core of Central Eurasia.

Historically, it’s well established that the Scythians constituted the first pastoral nomadic nation. They took over the Western steppe – as a major power – while other steppe Iranians moved East as far away as China. Scythians were not only fabulous warriors – as the myth goes, but most of all very savvy traders connecting Greece, Persia and the east of Asia: something described, among others, by Herodotus.

So an ultra-dynamic, overland international trade network across Central Eurasia developed as a direct consequence of the drive, among others, by Scythians, Sogdians and the Hsiung-Nu (who were always harassing the Chinese in their northern frontier). Different powers across Central Eurasia, in different epochs, always traded with everyone on their borders – wherever they were, from Europe to East Asia.

Essentially Iranian domination of Central Eurasia may have started as early as 1,600 B.C. – when Indo-Europeans showed up in upper Mesopotamia and the Aegean Sea in Greece while others journeyed as far as India and China.

It’s fully established, among others by an unimpeachable scholarly source, Nicola di Cosmo, in his Ancient China and Its Enemies: The Rise of Nomadic Power in East Asian History (Cambridge University Press): pastoral nomadic lifestyle on horseback was developed by Iranians of the steppe early in the first millennium B.C.

Jump cut to the end of the first century B.C., when Rome was starting to collect its precious silk from East Asia via multiple intermediaries, in what is described by historians as the first Silk Road.

A fascinating story features a Macedonian, Maes Titianos, who lived in Antioch in Roman Syria, and organized a caravan for his agents to reach beyond Central Asia, all the way to Seres (China) and its imperial capital Chang’an. The trip lasted over a year and was the precursor to Marco Polo’s travels in the 13th century. Marco Polo actually followed roads and tracks that were very well known for centuries, plied by numerous caravans of Eurasian merchants.

Up to the caravan organized by Titianos, Bactria – in today’s Afghanistan– was the limes of the known world for imperial Rome, and the revolving door, in connectivity terms, between China, India and Persia under the Parthians.

And to illustrate the “people to people contacts” very dear to the concept of 21st century BRI, after the 3rd century Manicheism – persecuted by the Roman empire – fully developed in Persia along the Silk Road thanks to Sogdian merchants. From the 8th to the 9th century it even became the official religion among the Uighurs and even reached China. Marco Polo met Manicheans in the Yuan court in the 13th century.

The Silk Roads were a fabulous vortex of peoples, religions and cultures – something attested by the exceptional collection of Manichean, Zoroastrian, Buddhist and Christian manuscripts, written in Chinese, Tibetan, Sanskrit, Syriac, Sogdian, Persian and Uighur, discovered in the beginning of the 20th century in the Buddhist grottoes of Dunhuang by European orientalists Aurel Stein and Paul Pelliot, following the steps of Chinese pilgrim Xuanzang. In the Chinese unconscious, this is still very much alive.

By now it’s firmly established that the Silk Roads may have started to slowly disappear from history with the Western maritime push to the East since the late 15th century. But the death blow came in the late 17th century, when the Russians and the Manchu in China divided Central Asia. The Qing dynasty destroyed the last nomadic pastoral empire, the Junghars, while the Russians colonized most of Central Eurasia. The Silk Road economy – actually the trade-based economy of the Eurasian heartland – collapsed.

Now, the vastly ambitious Chinese BRI project is inverting the expansion and construction of a Eurasian space to East to West. Since the 15th century – with the end of the Mongol Empire of the Steppes – the process was always from West to East, and maritime, driven by Western colonialism.

The China-Iran partnership may have the capacity to become the emblem of a global phenomenon as far-reaching as the Western colonial enterprises from the 15th to the 20th centuries. Geoeconomically, China is consolidating a first step to solidify its role as builder and renovator of infrastructure. The next step is to build its role in management.

Mackinder, Mahan, Spykman – the whole conceptual “rule the waves” apparatus is being surpassed. China may have been an – exhausted – Rimland power up to the mid-20th century. Now it’s clearly positioned as a Heartland power. Side by side with “strategic partner” Russia. And side by side with another “strategic partner” that happened to be the first historical Eurasian power: Iran.

0 thoughts on “Birth of a new geopolitical paradigm”