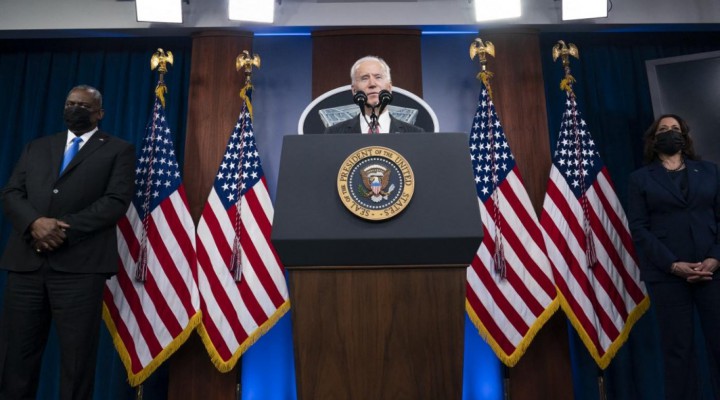 The US does not appear ready to accept a multipolar world, still believing that its place as a global leader is as it was after 1945

In the foreign policy arena, US President Joe Biden and his secretary of state, Antony Blinken, have emphasised a firm approach to the country’s three main nemeses: the historical one, Iran; the cyclical one, Russia; and the new one, China.

The latter in particular has been defined as the main competitor and challenge facing the US in the coming years, in stark contrast to the apparent views of the American public. According to a recent CBS poll, 54 percent believe that the main threat to their way of life is internal, while only eight percent cited foreign threats.

Regardless of what Americans think, is it really wise for the Biden administration to assertively engage these three rival powers at the same time? This implies a tenuous grasp of the reality the US is facing; or, to put it more bluntly, it conveys the impression that the Beltway is affected by a herd immunity to critical thinking.

At the peak of its internal and external weakness, still overstretched on various battlegrounds, and with two key pillars of its decades-long supremacy – the dollar as the global reserve currency and technological superiority – under threat, the US appears determined to take on these powers simultaneously.

Former secretary of state Henry Kissinger, who conceived the historic 1972 US opening to China against the Soviet Union ahead of the US victory in the Cold War, must be scratching his head.

The plausible outcome of such an overconfident and hubristic approach is that China, Russia and Iran will intensify their cooperation against what they perceive as an American attempt to preserve its global supremacy at any cost. The consequences may be unpleasant for Washington’s allies in Asia, the Middle East and Europe.

Russia’s political and security interests in the Ukraine and Belarus (regardless of whether or not they are legitimate) have been challenged by the US, as have its interests in the Middle East (Syria) and domestically, with respect to opposition leader Alexei Navalny and the protests accompanying his detention.

By further isolating Russia, the US, for the time being, can likely count on the EU’s support, amid worsening relations between Moscow and Brussels. Yet, despite Washington’s insistence, Germany does not appear ready to abandon the Nord Stream 2 gas pipeline to Russia. In addition, Brussels’ tough stance towards Moscow may be reviewed if Armin Laschet succeeds Angela Merkel to become the new German chancellor.

Although Biden has confirmed his laudable intention to re-enter the nuclear deal with Iran, he seems to want to impose the narrative that the deal was violated by Tehran, rather than by Washington – and that it is therefore up to Iran to return to the deal’s clauses first, before the US removes sanctions.

The reality is just the opposite. The US was the first to violate the deal, with the formal exit decreed by former President Donald Trump in May 2018. Iran only reduced its compliance a year later, as allowed by the deal’s Article 36. Tehran is ready to return to full compliance when Washington does the same, but it has also issued an ultimatum: if sanctions are not lifted by 21 February, it will stop its voluntary implementation of the NPT’s additional protocol and expel international inspectors. Time is therefore running out.

At the same time, Biden has sent important signals to the Iranian leadership by stopping US support for Saudi Arabia’s war effort in Yemen, suspending weapons sales to Riyadh and Abu Dhabi, and reviewing the terror designation against Yemen’s Houthis – moves that should not be ignored in Tehran.

Back channels between the two sides are hopefully already at work to find a roadmap out of this impasse. But the question remains: between Washington and Tehran, who is more in need of a ladder to climb down from the tree?

While the US stance on the Iran nuclear deal is logically questionable, it is unlikely that European countries will distance themselves from it; after all, they did not even do so under Trump. But for Tehran, the European position is irrelevant. Russia and China, conversely, seem more inclined to subscribe to the Iranian logic. It is hard to say whether, and how, such divisions will affect the future effectiveness of the P5+1 group of countries that oversees the deal.

The pattern followed with China is similar. Issues that Beijing considers internal – such as Xinjiang, Hong Kong, Taiwan and matters related to its national security, such as the South China Sea – are tackled robustly by Washington, which risks further damaging an increasingly difficult bilateral relationship.

The US administration has been urged to adopt a tougher stance towards Beijing through a widely read Atlantic Council report, the Longer Telegram, which seems to emulate George Kennan’s telegram in 1946 from Moscow, which laid the foundations for the successful American containment policy towards the Soviet Union.

Unfortunately, it presents analyses and recommendations that are questionable and, in some cases, dangerous. These include a list of red lines that should not be crossed by China: any nuclear, chemical or biological weapons action against the US by North Korea where China is believed to have failed to take decisive action to prevent it; any Chinese economic blockade or major cyberattack against Taiwan; and any major Chinese hostile action in the South China Sea to further reclaim and militarise islands, among other items.

Laying down these red lines implies a readiness to enforce them. Is this the case for the US in 2021? Red lines usually restrict diplomacy and political options, risk triggering dangerous escalation, or risk losing credibility. The Obama administration’s “red line” on the use of chemical weapons in Syria in 2013 speaks for itself.

Of its three nemeses, the US may face the greatest difficulties with respect to China, which is far more powerful than Russia or Iran. In addition, the solidarity of Washington’s European and Asian allies in this case seems much less obvious.

Last November, with Biden already elected, China and 14 other Asia-Pacific nations signed the Regional Comprehensive Economic Partnership, the largest free trade agreement ever. Washington’s historic allies, including Australia, New Zealand, Japan and South Korea – no matter how concerned they have been by Beijing’s allegedly aggressive policies – did not hesitate to join the deal. EU members recently signed an equally important agreement with China on investment protection.

European and Asian allies of the US are certainly concerned about China’s rise, but they do not seem inclined to subscribe to the seemingly assertive path that the Biden administration is adopting.

The problem is therefore far deeper than Trump’s failed policies, nor can it be naively solved by rewinding the film to the Obama era. US foreign policy needs a thorough cultural overhaul, and it is disconcerting that – so far anyway – the Biden administration does not appear inclined in this direction.

As observers have astutely noted, the US does not appear ready to accept a multipolar world; it perseveres in believing that its place as a global leader is just as it was after 1945.

In confronting Russian ‘aggression’, Biden forgets he is the problem, not the solution

Why the US Will Continue to Meddle in Thailand…

0 thoughts on “Biden’s policy of containing China, Russia and Iran is no longer viable”