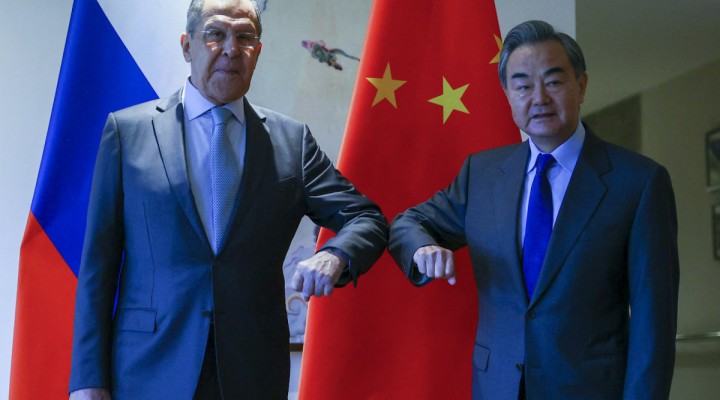 With a Russia-China-Iran triple bitch slap on the hegemon, we now have a brand new geopolitical chessboard

It took 18 years after Shock and Awe was unleashed on Iraq for the hegemon to be mercilessly shocked and awed by a virtually simultaneous, diplomatic Russia-China one-two.

How this is a real game-changing moment cannot be emphasized enough; 21st century geopolitics will never be the same again.

Yet it was the hegemon who first crossed the diplomatic Rubicon. In the middle of a softball interview, the handlers behind the hologram Joe “I’ll do whatever you want me to do, Nance” Biden whispered in his earpiece that he should brand Russian President Vladimir Putin as a soulless “killer.”

Not even at the height of the Cold War had the superpowers resorted to ad hominem attacks. The result of such an astonishing blunder was to regiment virtually the whole Russian population behind Putin – because that was perceived as an attack against the Russian state.

Then came Putin’s cool, calm, collected – and quite diplomatic – response, which needs to be carefully pondered. These sharp-as-a-dagger words are arguably the most devastatingly powerful five minutes in the history of post-truth international relations.

In For Leviathan, it’s so cold in Alaska, we forecast what could then take place in the US-China 2+2 summit at a shabby hotel in Anchorage, with cheap bowls of instant noodles thrown in as extra bonus.

China’s millennial diplomatic protocol establishes that discussions start around areas of common ground, which are then extolled as being more important than disagreements between negotiating parties. That’s at the heart of the concept of “no loss of face.” Only after establishing the common ground do the parties discuss their differences.

Yet it was totally predictable that a bunch of amateurish, tactless and clueless Americans would smash those basic diplomatic rules to show “strength” to their home crowd, distilling the proverbial litany on Taiwan, Hong Kong, South China Sea and the “genocide” of Uighurs.

Oh, dear. There was not a single State Department hack with minimal knowledge of East Asia to warn the amateurs you don’t mess with the  formidable head of the Foreign Affairs Commission of the CCP’s Central Committee, Yang Jiechi, with impunity.

Visibly startled, but controlling his exasperation, Yang Jiechi struck back. And the rhetorical shots were heard around the whole Global South. They had to include a basic lesson in manners: “If you want to deal with us properly, let’s have some mutual respect and do things the right way.”

But what stood out was a stinging, concise diagnostic blending of history and politics:

The United States is not qualified to talk to China in a condescending manner. The Chinese people will not accept that. It must be based on mutual respect to deal with China, and history will prove that those who seek to strangle China will suffer in the end.

And all that translated in real time by young, attractive and ultra-skilled Zhang Jing – who inevitably became an overnight superstar in China, reaping an astonishing 400 million plus hits on Weibo.

The incompetence of the “diplomatic” arm of the Biden-Harris administration beggars belief. Using a basic Sun Tzu maneuver, Yang Jiechi turned the tables and voiced the predominant sentiment of the overwhelming majority of the planet: Stuff your unilateral “rules-based order.” We, the nations of the world, privilege the UN charter and the primacy of international law.

So this is what the Russia-China one-two achieved almost instantaneously: From now on, the hegemon should be treated, all across the Global South, with at best disdain.

Pre-Alaska, the Americans went on to Japan and South Korea for “consultations” – a charm offensive. That’s irrelevant. What matters is post-Alaska, starting with the crucial Sergey Lavrov-Wang Yi meeting of foreign ministers in Guilin.

Lavrov, always unflappable, clarified in an interview with Chinese media how the Russia-China strategic partnership sees the current US diplomatic train wreck:

As a matter of fact, they have largely lost the skill of classical diplomacy. Diplomacy is about relations between people, the ability to listen to each other, to hear one another and to strike a balance between competing interests. These are exactly the values ​​that Russia and China are promoting in diplomacy.

The inevitable consequence is that Russia-China must “consolidate our independence,” Lavrov said.

The United States has declared limiting the advance of technology in Russia and China as its goal. So, we must reduce our exposure to sanctions by strengthening our technological independence and switching to settlements in national and international currencies other than the dollar. We need to move away from using Western-controlled international payment systems.

Lavrov pointed out that Russia-China have clearly identified how the “Western partners” are:

promoting their ideology-driven agenda aimed at preserving their dominance by holding back progress in other countries. Their policies run counter to the objective international developments and, as they used to say at some point, are on the wrong side of history. The historical process will come into its own, no matter what happens.

And then, at the joint press conference with Wang Yi in Guilin on Tuesday, Lavrov dropped a stunning but predictable bombshell:

“There are no relations with the European Union as an organization. The entire infrastructure of these relations has been destroyed by unilateral decisions made by Brussels.”

The door to reconciliation, though, is left open, “if and when Europeans deem fit to eliminate these anomalies in contacts with their largest neighbor.” Lavrov almost ruefully compared “no changes on the Western front” with a “very intensive agenda” in the East.

As a stark presentation of an inevitable “historical process,” it doesn’t get more crystal clear than that. And, predictably, it had taken no time at all for the “Western partners” to fall back into – what else? – their same old bag of sanctions tricks.

Here we go again: a US, UK, EU, Canada “alliance” issuing sanctions against selected Chinese officials because the People’s Republic of China in Blinken’s words “continues to commit genocide and crimes against humanity in Xinjiang.”

The EU, UK, and Canada didn’t have the guts to extend the sanctions to a key player: Xinjiang party chief Chen Quanguo, who’s a Politburo member. The Chinese response would have been – economically – devastating.

Still, Beijing counterpunched with its own sanctions – targeting, crucially, Adrian Zenz, the German far-right evangelical nut posing as a “scholar” who produced the bulk of the completely debunked “proof” of a million Uighurs held in concentration camps.

Once again, the “Western partners” are impermeable to logic. Adding to the already appalling state of EU-Russia relations, Brussels chooses to also antagonize China based on a single fake dossier, playing right into the hegemon’s not exactly secret divide-and-rule agenda.

Mission (nearly) accomplished: Brussels diplomats tell me the EU Parliament is all but set to refuse to ratify the China-EU trade deal painstakingly negotiated by Merkel and Macron. The consequences will be immense.

So Blinken will have reasons to be cheerful when he meets assorted eurocrats and NATO bureaucrats this week, ahead of the NATO summit.

Yet now the “Western partners” are so mortified by the plight of Muslims in Western China.

At least there are some cracks within the EU illusionist circus. Last week, the French Armed Forces Joint Reflection Circle (CRI) – in fact, an independent think tank of former high-ranking officers – wrote a startling open letter to cardboard NATO secretary-general Stoltenberg de facto accusing him of behaving as an American stooge with the implementation of the NATO 2030 plan.

The French officers drew the correct conclusion: the US/NATO combo is the main cause of appalling relations with Russia.

These Ides of March

Meanwhile, sanctions hysteria advances like a runaway train. Biden-Harris already threatened to impose extra sanctions on Chinese oil imports from Iran. And there are more in the pipeline – on manufacturing, technology, 5G, supply chains and semiconductors.

And yet no one is trembling in his boots. Right on cue with Russia-China, Iran has stepped up the game, with Ayatollah Khamenei issuing the guidelines for Tehran’s return to the JCPOA.

And with that we have a Russia-China-Iran triple bitch slap on the hegemon.

In our latest conversation-interview, to be released soon in a video + transcript package, Michael Hudson – arguably the world’s top economist – hit the heart of the matter:

The fight against China, the fear of China, is that you can’t do to China what you did to Russia. America would love for there to be a Yeltsin figure in China to say, let’s just give all of the railroads that you’ve built, the high-speed rail, let’s give the wealth, let’s give all the factories to individuals and let the individuals run everything and, then we’ll lend them the money, or we’ll buy them out and then we can control them financially.

And China’s not letting that happen. And Russia stopped that from happening. And the fury in the West is that, somehow, the American financial system is unable to take over foreign resources, foreign agriculture. It is left only with military means of grabbing them as we are seeing in the near East and you’re seeing in the Ukraine right now.

To be continued. As it stands, we can all be sure that the Ides of March – the 2021 version – have already configured a brand new geopolitical chessboard. The Russia-China Double Helix on high-speed rail has left the station – and there’s no turning back.