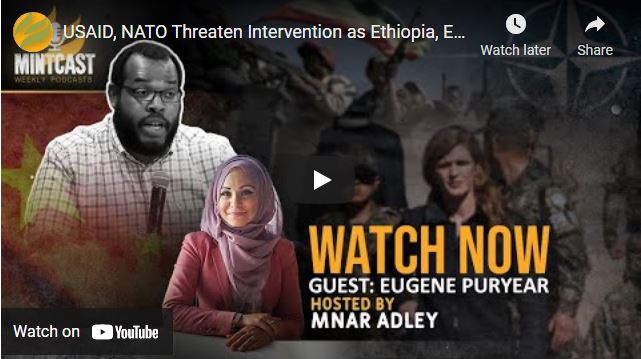 Many Ethiopians are dead against any further American involvement, expressing alarm that the U.S. has already sent warships and thousands of troops to the region and supporting the TPLF in anticipation of future events.

Ethiopia is not a country that is on many Americans’ radar. Yet, since 2020, a brutal civil war has raged, displacing an estimated 4 million people. As the conflict continues, hawks in Washington are beginning to circle, demanding the U.S. intervene militarily.

“Ethiopia’s civil war is a problem U.S. troops can help solve,” Admiral James Stavridis, former supreme allied commander of NATO, wrote in Bloomberg and The Washington Post. “Sending peacekeepers to the pivotal nation of East Africa wouldn’t be popular domestically, but may be the only way to stop the conflict,” he added. Meanwhile, former Assistant Secretary of State for African Affairs Jendayi Frazer argued that the West should establish a “no-fly zone” across the country – a nation of 115 million people and twice the size of France.

When it comes to Ethiopia – said head of USAID Samantha Power, one of the architects of the U.S. intervention in Libya – “every option is on the table,” using a phrase that has long been understood to be a threat of war. Secretary of State Antony Blinken also refused, when directly asked, to rule out sending troops into Ethiopia.

Joining MintCast host Mnar Adley today to discuss what is going on in Ethiopia is Eugene Puryear. Eugene is a founder of and host at BreakThrough News, for which he recently traveled to Ethiopia to report from the ground. In the 2008 and 2016 U.S. elections, he was the vice-presidential candidate for the Party for Socialism and Liberation. He is also author of the book “Shackled and Chained: Mass Incarceration in Capitalist America.”

Ethiopia’s war is a conflict between the Tigrayan People’s Liberation Front (TPLF), a group that held power across the country between 1991 and 2018, and the government of Abiy Ahmed in Addis Ababa. Yet corporate media have refrained from presenting the conflict as a struggle between rivaling factions, but rather have characterized it as the government “waging a reign of terror… [that] bears the hallmarks of genocide” (CNN) against a “a scrappy force of local Tigrayan recruits” (The New York Times). Ignoring credible accusations against the TPLF of using child soldiers and other war crimes, both the press and the United States appear to have chosen to back their longtime allies in this campaign.

Many Ethiopians are dead against any further American involvement, expressing alarm that the U.S. has already sent warships and thousands of troops to the region in anticipation of future events. Some have even likened the situation to the one in Libya in 2011, where the West hyped up fake news stories about atrocities and an impending genocide to unseat Colonel Muammar Gaddafi from power and bring about a decade of Jihadist rule.

Between 1991 and 2018, the United States had a loyal partner in Ethiopia. However, in recent years, the country has begun to try to develop deeper ties to its neighbor Eritrea and forge a more independent path. To this end, China has helped, and has quickly become Ethiopia’s major economic partner, much to the chagrin of Washington, where war drums are beginning to be beaten.

Ethiopians have taken to social media, popularizing the anti-intervention hashtag “#NoMore” to signal their opposition to Western involvement. Yet their voices, they claim, are being systematically silenced by big-tech giants, leaving critical voices harder to find. Could Ethiopia soon turn into another Libya? Join us to find out.