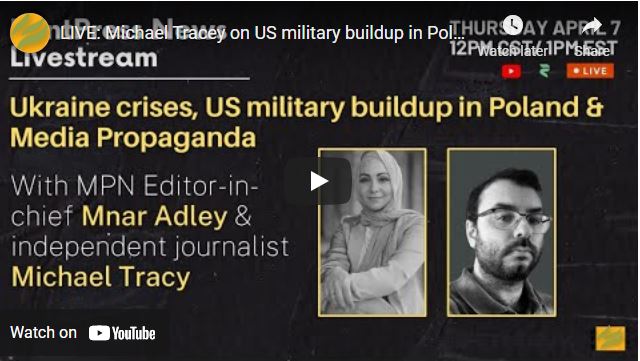 “Every couple of days we get another so-called ‘gaffe’ from Biden where he appears to be revealing another layer of involvement in this Ukraine conflict.” – Michael Tracey

In just a few short weeks, Russia’s war on Ukraine has precipitated a massive exodus of refugees. According to the United Nations, more than 4.3 million people have fled the country since February 24, the majority of them – 2.5 million – traveling west to Poland. Media across the world have closely covered the story, and shown a great deal more sympathy for the Ukrainian refugees than for others fleeing from U.S. wars in the Middle East or North Africa.

But fewer people are aware of another group that is also flooding into Poland: American soldiers. Officially, the U.S. presence has already more than doubled to 9,000 troops, most of whom are stationed near or on the Polish-Ukrainian border. The majority of these units have arrived in the last few weeks.

What is going on there? Why is the U.S. deploying thousands of troops to the edge of a warzone? And what are these units doing once they arrive? To answer these questions, the MintCast is joined by Michael Tracey, who recently returned from the Polish-Ukrainian border.

Originally from New Jersey, Michael is a journalist and political commentator. His work has appeared in outlets such as The Guardian, The Intercept, Al-Jazeera, The Nation and Vice. However, he now is an independent journalist writing on Substack.

Michael is one of the only reporters who has attempted to scrutinize the alarming U.S. troop buildup in Eastern Europe. However, his attempts to understand what they are doing there came up short, though not through lack of trying. “It is impossible to say with any degree of specificity, given the layer of secrecy that they are imposing,” he told Mnar today, adding:

I was told by multiple soldiers, independently of one another, that the policy in place at these new U.S. installations throughout Poland, is a media blackout. So even the most friendly and deferential journalists, who they can hand pick to present in a positive light what the U.S. military is doing there; even they are not being permitted to enter these facilities?! It makes you wonder because every couple of days we get another so-called ‘gaffe’ from Biden where he appears to be revealing another layer of involvement in this Ukraine conflict.”

Michael was dismayed to find that the large majority of displaced Ukrainians he encountered in eastern Poland were firmly supportive of the idea of a no-fly zone over Ukraine, believing that this would save lives, rather than precipitate World War Three. He also found that the area was a breeding ground for profiteers and hucksters trying to make a quick buck.

Today, the two discussed the prospect of further U.S. military involvement in Ukraine, the raging information war between east and west, how corporate media in the U.S. has lined up in lockstep behind the U.S., and the use and misuse of the word “genocide” to describe the crimes currently being committed in Ukraine. Join us now for a lively and timely discussion.