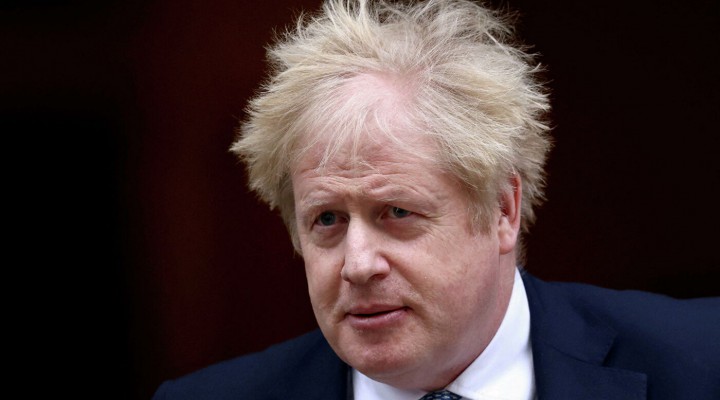 “When Poland is threatened then the UK stands ready to help,” declared the British prime minister on a staged visit to Warsaw this week sounding as if he were wearing shining armor instead of his trademark crumpled suit.

As Boris Johnson arrived, hundreds of more British troops were being deployed in the Eastern European country as well as in neighboring Baltic states.

The plucky message: Britain is defending Europe from those nasty Russian hordes. This plays on the overblown notion that Britain won the Second World War against Nazi Germany, even though the Third Reich was in fact built up by British ruling circles and capitalists during the 1930s.

Johnson went on to accuse Russia of being a bully and urged Russian President Vladimir Putin to “de-escalate” military tensions.

Then accompanied by the Polish premier, Johnson went off to greet British troops who were stationed on Poland’s border. Affecting the air of a cheery general inspecting the fortifications, Johnson queried the military engineers why they were repairing roads. “Don’t we want to stop them coming in?” asked Boris.

This week Russian forces are conducting scheduled military exercises in Belarus which neighbors Poland to the East.

From his remarks, it seems like the British leader thinks that Russian troops are now going to invade Poland. For weeks now, Johnson’s government has been amping up the Biden administration’s claims that Russia was going to imminently invade Ukraine. Those claims have failed to materialize which is consistent with repeated denials by Moscow of having any plans to attack Ukraine.

Russia and the United Nations have condemned the war hysteria being drummed up by Washington and London through baseless speculation about imminent aggression against Ukraine.

The United States and Britain have both withdrawn their embassy staff from Ukraine. President Joe Biden this week advised any American citizens in the country to “get out now”.

The scaremongering by the Americans and British seems to be aimed at creating a conflict with Russia, with Ukraine as a proxy.

Andrey Rudenko, Russia’s Deputy Foreign Minister, remarked this week: “The situation has become completely absurd. We have repeatedly stated that we have no plans to invade or attack Ukraine.” He added this prescient comment, “Clearly, establishing peace in Ukraine is not part of NATO’s plans.”

Rudenko said the Anglo-American-led NATO alliance was using tensions over Ukraine as a way to “contain” Russia by undermining its defense and economic capabilities.

Despite their best malevolent efforts, Washington and London have so far failed to precipitate a full-blown war in Ukraine involving Russia. American and British officials have said they envisage Ukraine becoming another Afghanistan quagmire for Russia. But in spite of the goading, Moscow is not taking the bait. It remains steadfast in its position that it has no intention to escalate militarily over Ukraine. That’s what Putin again told French President Emmanuel Macron this week.

This is why British and American lecturing to Russia about the need to de-escalate and “choose the path of diplomacy” sounds ridiculous. This lecturing was reiterated by British Foreign Secretary Liz Truss when she was in Moscow this week. Russian Foreign Minister Sergei Lavrov lampooned such arrogant ultimatums as a “dead-end street”.

Moscow is being admonished to de-escalate troops within its borders while British and American troops are massing near Russian territory, from the Baltic to the Black Sea and in between. British special forces are reportedly being deployed in Ukraine to train militia in techniques of sabotage, assassination and other forms of terrorism. British and Polish mercenaries are reportedly working together.

It is not Russia that needs to “choose the path of diplomacy”; it is Washington and London. The Americans and British are deliberately winding up the provocations in Ukraine and Eastern Europe in order to militarize relations with Russia beyond diplomatic repair. This is part of their containment strategy.

Rather than proper diplomatic negotiations between Moscow and the US-led NATO bloc on creating a mutual security treaty for Europe, the Anglo-American axis is cynically stoking tensions to preclude any reasonable dialogue. Peace and normal relations with Russia are anathemas because there is no profit for their warmongering industries that are so essential to the functioning of Anglo-American capitalism.

Having failed to predict a Russian invasion of Ukraine, it seems now that Washington and London have decided to double down by casting a shadow of fear over all of Eastern Europe. And the Russophobic regimes in Poland and Baltic states are all too willing to indulge this criminal grandstanding of hostilities.

Boris Johnson flying unexpectedly to Warsaw this week along with hundreds of British troops is all part of the despicable drama and psyops. The British premier avowedly models himself on Britain’s wartime hero Winston Churchill. He is also a proven liar and political con artist. While Johnson desperately struggles to stave off being sacked by his own party over non-stop scandals in Downing Street, he is prancing around Eastern Europe acting like a noble defender against “Russian invasion”.