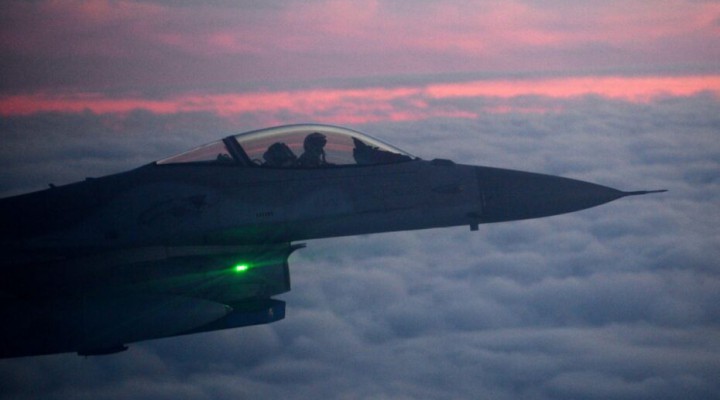 Washington could claim that the military aid to Ukraine so far is defensive weaponry. Sending warplanes, however, from a U.S. airbase is taking the involvement to a higher level risking escalation.

Polish shenanigans over sending fighter jets to Ukraine earned a sharp rebuke from the Pentagon. And then as if to underline the awkward ramifications of the spat, Vice President Kamala Harris was quickly flown to Warsaw on a damage-limitation task to patch up NATO unity.

It looks like both the Americans and the Poles got cold feet about a ploy to send fighter jets into Ukraine to contest airspace with Russian forces. With the Russian command claiming to have knocked out 90 percent of Ukrainian military airbases since its incursion on February 24, any such supply of warplanes from NATO members would be tantamount to a kamikaze mission.

Moreover, the move would mark a dangerous escalation of NATO involvement in a war with Russia, potentially pitting both sides in direct conflict. That could result in a Third World War. Notably, this risk of being embroiled in a wider war was highlighted by Polish President Andrzej Duda on March 1 in a joint press conference with NATO chief Jens Stoltenberg.

However, something changed in that wary calculus. Last weekend, the U.S. and Poland were reportedly having deep discussions about a plan to send MiG-29 fighter jets from the Polish Warsaw Pact inventory for deployment in Ukraine. The Soviet-era MiGs are what Ukrainian pilots are trained to fly. Washington was keen on the idea because it was being presented as a “sovereign decision” by Poland to assist Ukraine on a bilateral level. That meant that the U.S. and NATO would be distanced from the supply of warplanes.

A second incentive for Washington was that the Polish MiG fleet would be “backfilled” by U.S. F-16s. From a cynical point of view, the deal looked lucrative as well as tactical. The Polish MiGs flown by Ukrainians might cause some combat problems for Russia in the short term, but even if they were destroyed by Russian forces the replacement of the Polish fleet with new F-16s would be a boon for the U.S. military-industrial complex in the long term.

Somehow though the Poles suddenly got cold feet, perhaps realizing that their involvement on a “sovereign bilateral basis” could leave them potentially vulnerable to Russian counter-attack without the insurance policy of NATO’s Article V collective defense. Trustworthiness is not exactly Uncle Sam’s strong point.

Then came the embarrassing switch that caught Washington off-guard. Without consulting the Americans, the Poles offered to send the MiG-29s first to the U.S. airbase in Germany’s Ramstein and from there on to Ukraine.

The Pentagon’s slap-down to Warsaw was swift and emphatic. Secretary of Defense Lloyd Austin told his Polish counterpart that such an idea was “untenable” and he “stressed that we do not support the transfer of additional fighter aircraft to the Ukrainian air force at this time, and therefore have no desire to see them in our custody either.”

Evidently, Washington got leery about the prospect of sending warplanes from one of its bases into a battle zone with Russia. Up to now, the U.S. has been transferring billions of dollars worth of weapons to the Kiev regime which have in turn been deployed against Moscow-backed Russian separatists in Ukraine’s southeast Donbass region (now independent republics recognized by Moscow as of February 21). Nevertheless, Washington could claim that the military aid so far is defensive weaponry. Sending warplanes, however, from a U.S. airbase is taking the involvement to a higher level risking escalation.

Moreover what seems to have irked the Americans though is how the Poles maneuvered to set them up. Obviously, the Poles didn’t trust what Washington was assigning them to do, and then the Americans were hacked off when the Poles came up with an alternative plan for deploying warplanes to Ukraine that might jeopardize the U.S..

Following the Pentagon rebuke, Poland’s ambassador to the United States Marek Magierowski alluded to the shenanigans in an interview with CNN on March 9. He said Poland was “acutely aware” of the consequences – meaning possible armed conflict with Russia.

Pointedly, the Polish envoy revealed: “We were under immense pressure on the part of our allies, and public opinion also here in the United States. And we were acutely aware of all technical, legal, and diplomatic consequences of such a move, which was risky, of course. That is why we came up with a logical, conscionable solution [of going via the U.S. base in Germany]. Our American partners rejected this proposal because they have come to the conclusion that it was too escalatory [sic]. Well, we understand this, and I believe that we can continue coordinating our joint efforts with our American partners and with other NATO members in order to help the Ukrainians defend themselves as effectively as possible.”

What this means is the Poles didn’t trust the Americans over the idea of “sovereign bilateral” involvement, as Washington was initially recommending regarding the supply of MiGs to Ukraine. And when the Poles sought to find American cover by involving the U.S. as the warplane conduit, the Biden administration balked big time and with a big measure of contempt for Warsaw trying to get smart on Uncle Sam.

Kamala Harris, the U.S. Vice President, has been dispatched in a hurry to Warsaw to patch up any ill-feeling. Such is the desperation in the Biden administration to project NATO unity towards Russia. Given her ineptitude, it would be imprudent to count on Harris succeeding in smoothing things over.

It can also be reasonably conjectured that Berlin was not pleased either by the U.S.-Polish ploy to send warplanes against Russia from its territory. The Germans can feel aggrieved that NATO allies were putting a target on their back.

But this is not the end of it. The Americans and their NATO partners are reportedly going back to the drawing board to find more inventive ways of sending warplanes to Ukraine for combat against Russia without overt NATO involvement. This might involve sending plane parts that are assembled in Ukraine or Ukrainian pilots flying fighter jets from NATO countries. The British too are this week sending new inventories of anti-aircraft weapons. NATO is sliding towards open conflict with Russia.

0 thoughts on “U.S.-Poland Dogfight over Ploy for Sending NATO Warplanes to Ukraine”