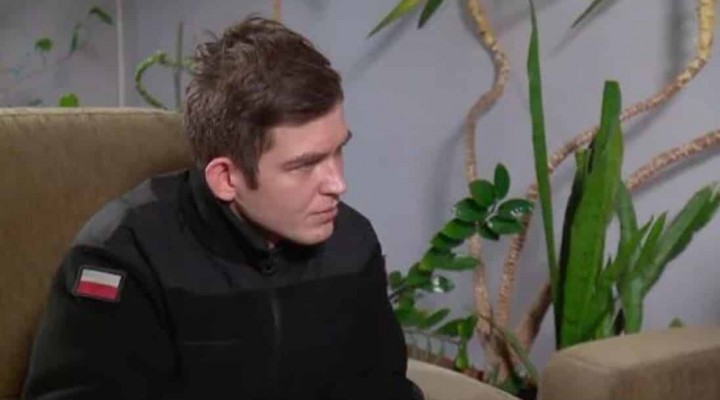 Polish serviceman Emil Chechko, who escaped to Belarus and asked for political asylum, claimed that he participated in the murders of illegal migrants on the Polish border. Chechko also revealed that he witnessed the murders of at least two Polish volunteers on the border.

In an interview with the Belarus 1 TV channel, Emil Chechko said that he took part in the shootings for the first time back in May.

“They exposed the first group, killed them, then the second group, they were also killed. I did that too – I shot.”- Chechko said in his interview.

“I was in such a situation when some volunteer drove up and asked: “Where are you taking them [migrants]?“ And the border guard simply shot him in the forehead,” Chechko continued. When the correspondent clarifies whether she correctly understood that he was talking about the murder of Polish volunteers, the soldier states: “I’ve witnessed at least two such cases.”

The official representative of the Prosecutor General’s Office of Belarus Dmitry Brylev said that Minsk will send documents to international structures to launch a criminal case against Poland due to the murders and mistreatment of migrants. According to the Belorussian official, the Prosecutor General’s Office has collected evidences in five volumes confirming crimes committed by Poland. All the necessary materials will be transferred to international and European institutions, including the European Parliament, for a legal assessment.

The ill-treatment of the refugees by the Polish military has been repeatedly reported in recent months.

According to open sources, since the beginning of 2021, at least nine bodies of refugees have been found on Polish territory.

Shocking videos were also leaked online confirming the shooting of groups of refugees by the Ukrainian military on the northern border with Belarus. Nevertheless, the statements of the defector Chechko caused a wide resonance in Poland, and are obviously ignored by the MSM.

A 25-year-old Polish soldier crossed the border with Belarus in the Grodno region and applied for political asylum because of his disagreement with the policy pursued by the Warsaw authorities regarding the migration crisis and the inhumane treatment of refugees.

The State Border Committee of Belarus stated that a serviceman of the Polish Armed Forces, Chechko, born in 1996, who deserted from the 11th Masurian Artillery Regiment, was stopped by a military patrol at the Tushemlya border outpost. Tomasz Piotrowski, the commander of the Polish Armed Forces

However, Polish military officials have not yet decided on the reasons that pushed Chechko to leave Poland.

At first, Chechko was declared dead, then missing. When the deserter appeared on Belarusian television, he was declared a brawler and a drug addict. Polish media claimed that Chechko was detained for drunk driving and marijuana consumption, as well as beating his mother. Thus, he left the country to avoid punishment.

As the accusations were insufficient to convince the public of the defector’s insanity, Tomasz Piotrowski, the commander of the Polish Armed Forces, went all in and claimed that Pan Chechko might have been a double agent or just a spy for Lukashenko.

“Perhaps he took this step, seeing that his officers began to notice his “double game”, – the Polish general claimed, -Here, in Poland, he cannot escape punishment.”

In turn, the former commander of the Polish ground forces, Waldemar Skshipchak, said that Chechko should be shot dead.

“A criminal, a deserter. A bullet in the head and disranking. I’m sorry, but it can’t be otherwise.”

He noted that the soldier defected to the side of a conditional enemy “in times of war.” If Poland is in “war” with Belarus, then it is obvious that the Polish Army is not able to lead it.

To date, it cannot be reliably known whether Emil Chechko deliberately fled to Belarus or whether he assisted with the Belarusian special services.

The only thing that is indisputable is that the Polish military once again showed their own inconsistency.

Taking into account the statement about the suspicions of Chechko’s links to the enemy Belarusian special services, why were Polish counterintelligence services not informed and the necessary measures were not taken?

Why the command did not take measures towards Chechko if he was drug and alcohol addicted and had problems with the law? This case revealed that the Polish Army command are completely unprofessional. Former Polish President Bronislaw Komorowski expressed his opinion, saying that the responsibility for the escaped serviceman should be assigned to the Minister of National Defense Mariusz Blaszczak.

“The person who commands everything is responsible for such situations. In this case, the Minister of National Defense must assume moral and political responsibility,” Komorowski said. — He sent these soldiers to the border, although they were not trained to replace border guards or policemen.”

“The soldier who went missing yesterday had serious problems with the law and filed for dismissal from the army. He should not have been sent to serve at the border.”

The Chechko case, which turned into a large scandal, will probably prompt many Polish soldiers to answer the question to what extent is the current Polish statehood something worth defending and dying for.