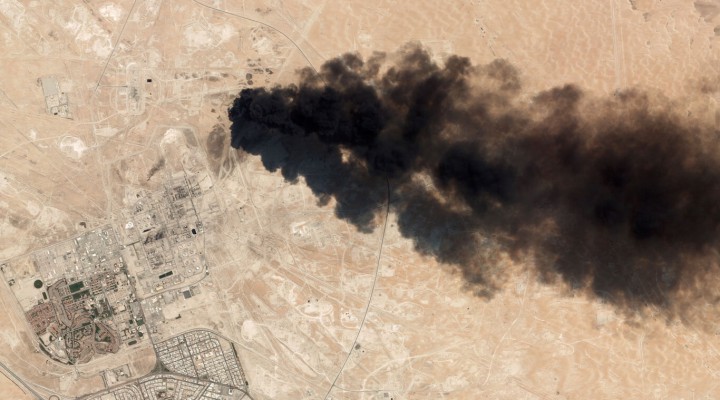 It is inconceivable to the United States that a “rag-tag” force like Yemen’s Houthis might, with home-made weapons, outdo the hundred-billion-dollar might and sophistication of the state-of-the-art systems Washington has lavished upon the Saudis.

MPN– Tensions between Saudi Arabia and Iran are escalating to new heights, drawing the United States into a confrontation with the Islamic Republic after a sophisticated attack targeted Saudi Arabia’s Aramco oil facility — the largest oil processing facility in the world — knocking out half of the country’s oil capacity, or more than 5 million barrels a day, and leaving the oil fields in flames.

The attack was nothing the Kingdom had seen before or expected: According to U.S. and Saudi intel, 18 drones and seven cruise missiles were launched and went undetected by both American and Saudi radar systems. The weaponry even went unnoticed by the U.S. military base nearby, the Prince Sultan Airbase, which is guarded by an American Patriot missile defense system and over 500 U.S. military personnel.

You better believe an attack at this level targeting a crossroad for global oil supplies did more than ruffle a few feathers.

Panic not only struck the Kingdom and the international economy, where oil prices spiked 19 percent — the highest ever recorded one-day increase — but U.S. and Saudi politicians, as well as a chorus of mainstream pundits, began to beat the drums of war targeting an old foe: Iran.

Saudi and U.S. military analysts have presented satellite images of where the missiles landed in the oil fields, purporting to show that the drones/missiles came from the direction of Iran. However, some experts are already countering these claims, pointing out that the images show impact points that are indeed west-northwest, which is the opposite direction of Iran.

Despite providing no substantial evidence and citing so-called anonymous intelligence — you know, the same intelligence that, to justify war with Iraq, claimed Iraq had weapons of mass destruction and that Saddam was working with al-Qaeda — the corporate media has amplified and endorsed the Saudi and Trump administration’s claims to manufacture consent for an all-out war with Iran.

NBC and CNN repeated the official line that Iran was likely behind the attack, and CNBC took Saudi officials’ words as gospel, without once questioning this government narrative that is setting us up on a warpath with the Islamic Republic.

Saudi Arabia said it would “forcefully respond to these aggressions.” Meanwhile, President Trump announced that the U.S. was “locked and loaded” and ready to retaliate, then escalated tensions by announcing that he was introducing a “substantial” new round of sanctions, thereby further revving up the economic war against Iran.

And Iran is not taking these threats of war very lightly.

Indeed, while the media is choking up the airwaves with pro-war and anti-Iranian propaganda, what’s been lost or perhaps purposely left out from this coverage is who actually took responsibility for this attack and why.

This wouldn’t be the first time Yemen’s resistance movement launched an attack on Saudi soil.

The Houthis, quite obviously, have no interest in conquering Saudi Arabia or even damaging their warring neighbor apart from what is needed to counter and deter ever-increasing Saudi attacks and defend what is left of Yemen.

Ansarullah has spent the last five years resisting the U.S./Saudi-backed bombardment of Yemen, which has created the worst humanitarian crisis in the world — leaving over 100,000 dead, over 23 million people starving, a cholera health crisis, and a human trafficking epidemic.

The humanitarian crisis kills a Yemeni child every 10 minutes from preventable diseases, starvation and malnutrition.

Perhaps if the media did their job in reporting these facts, it would be an embarrassment for the U.S. military machine. It would expose the utter failure of billions of dollars worth of Saudi and American military defense systems against a grassroots resistance movement taking on the Goliath of the U.S.-Saudi backed Coalition’s genocidal war against the Middle East’s now poorest country.

But this conflict goes further back than 2015. The U.S. has occupied Yemen in its pursuit of expanding its military empire under the guise of the war on terror. Since 2002, the U.S. has been drone bombing Yemen, setting up military outposts and torture facilities while exploiting the nation’s rich mineral resources.

Yemen was once called a living museum, a cradle to many civilizations and home to some of the world’s oldest human carved landscapes and architectural structures that date back to the time of Christ. Yemen is considered the richest country in the region in terms of minerals, culture and history.

But today UNICEF described its economy and society as on the verge of collapse.

The military occupation of Yemen has given the people there a death sentence so the U.S. can rattle its saber at Iran to justify the expansion of its military empire that feeds the maw of the military industrial complex.

Blaming Iran for an attack on the world’s largest oil processing site suits the interests of American allies in the region, including Saudi Arabia and Israel, which have directed Trump’s foreign policy in the Middle East that has included isolating Iran.

The story presented to Western audiences by the mainstream corporate media is rationalized by a carefully crafted and false narrative that the U.S.-backed, Saudi-led war against Yemen, which has dropped over 50,000 bombs on that country — bombs made and supplied by the USA– is to prevent an expanding Iran that is arming the Ansarullah Houthi movement.

But leaked internal documents show that many of these connections made by military intelligence were deliberately fabricated, and Yemenis are actually capable of manufacturing their own modern weapons. This shows how the Houthis in Yemen are apparently more capable than the Saudis have been in manufacturing the weapons they have used to pulverize Yemen, which are being sold to the kingdom by the US at a rate of $8 billion.

Just as the U.S. claimed that all their interventions during the Cold War were to defend against Soviet aggression, now any region in the Middle East the Empire wants to expand, exploit and occupy is conveniently labeled an Iranian outpost, justifying more wars.

Beyond this, it is of course “inconceivable” to the United States that a “rag-tag” force like Yemen’s Ansarullah Houthis might with home-made weapons outdo the hundred-billion-dollar might and sophistication of the state-of-the-art systems Washington has lavished upon the Saudis. Almost as embarrassing as losing to the North Vietnamese — so that couldn’t be what happened.

For decades, manufacturing consent for war by using false pretexts has been seized by both parties, whether Democratic or Republican. Both have spread disinformation to demonize an entire nation in order to drum up support for war.

Now, with the Saudi oil fields burning, the disinformation campaign moves into high gear — ignoring or selectively reporting not just key physical evidence but also the whole context of the humanitarian crisis in Yemen that has given rise to the desperate measures to which the Houthis have been forced to turn to — a right to self defense under the Geneva conventions.

If the media cared to report on this context it would expose the U.S. coalition as a paper tiger, which would mean that all of the blood & billions spent by Washington in the Middle East was essentially for nothing. It would also show the world that a united front organizing against war does work.

After landing in Saudi Arabia last week, Mike Pompeo scolded the media for asking about the Houthis claiming responsibility for the attack. His response was that they are liars and when referring to them you should call them the lying Houthis — this coming from the man who on video admitted to lying and deception while heading the CIA.

And just as before, it is not the politicians like Pompeo that pay for their lies, but the ordinary people, who pay with their lives.