HOME / WORLD / Saudi Oil Attacks: Time to Back Off on the Threats 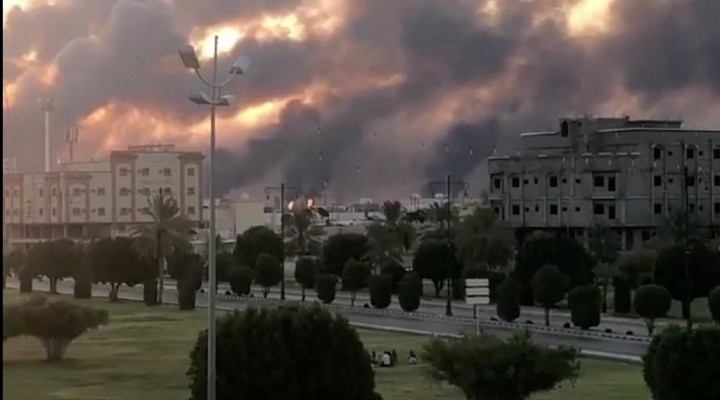 Attacks on two Saudi Arabian oil facilities on Saturday reportedly reduced the production of Aramco, the state oil company, by one half. It was a devastating demonstration of just how vulnerable the Kingdom’s oil economy actually is. Initial reports suggested that the damage had been caused by explosive drones launched by the Houthi rebels in Yemen, who claimed responsibility, but there has been considerable skepticism regarding whether the drones available to the Houthi could actually have carried out the attack.

Inevitably, the United States and the Saudis are blaming Iran, which has often been accused of being the Houthi’s sponsor. U.S. Secretary of State Mike Pompeo quickly claimed there was no evidence that the attacks emanated from Yemen and blamed Tehran, tweeting predictably that “amid all the calls for de-escalation, Iran has now launched an unprecedented attack on the world’s energy supply.”

As is often the case, Pompeo strung together some lies and half-truths. That Iran was the culprit was and still is unproven and the attack was on Saudi Arabia, which has been subjecting the Houthis to brutal bombardment that has produced famine and introduced cholera to Yemen, not on the “world’s energy supply.” Pompeo’s language is intentionally seeking to broaden the conflict by depicting Iran as a rogue nation seeking to do damage to everyone and preparing the audience for a possible counter-strike.

U.S. and Saudi officials have indeed been investigating whether the attacks involved cruise missiles fired from Iraq or Iran and would love to come to that conclusion, whatever the actual facts might be. The Iranians are believed to have a locally developed cruise missile that goes by the name Hoveyzeh, which is very mobile and can be fired from improvised sites. It is capable of flying at low altitudes to evade radar and has a five-hundred pound conventional warhead that would be more than capable of doing the reported damage to the oil facilities, much more so than would be possible using the missiles and drones that the Houthis are known to possess.

President Trump has also added his two cents, tweeting ominously on Sunday that “Saudi Arabia oil supply was attacked. There is reason to believe that we know the culprit, are locked and loaded depending on verification, but are waiting to hear from the Kingdom as to who they believe was the cause of this attack, and under what terms we would proceed!” Trump, who called Crown Prince Mohammed bin Salman to assure him of American support, also overreacted in his usual fashion, authorizing access to the United States’ Strategic Petroleum Reserve. The move has nothing to do with any real shortage of oil, particularly in the U.S., which imports little from the Middle East, and is clearly rather intended to stabilize oil prices during the two or more weeks it will take the Saudis to repair the damage to their facilities.

The attacks have forced Saudi Arabia to suspend production of 5.7 million barrels of oil a day, which is half of its normal output and over 5 percent of the global supply, so there will be considerable impact on global crude prices. The Saudi stock market felt the pain immediately, declining by 3 percent on Sunday with the expectation that crude prices will increase sharply over the next few days.

The damage to the facilities comes at a particularly bad time for the Saudis, perhaps by design by whoever carried out the attacks. Aramco will soon be floating an initial public offering (IPO) that could be one of the world’s largest. Potential foreign investors in particular will inevitably be concerned about the long-term security of the country’s reserves from future attacks by rebels or neighboring states, to include Iran.

Officials in Iran both and Iraq have denied allegations that the attacks had come from their respective territories, but that would be expected in any case. What is certain is that the success of the attack, from whatever source, has changed the calculus for what is taking place in the Middle East. Saudi Arabia has been waging a pitiless war in Yemen, but it now finds itself far more vulnerable than it deemed to be possible. Iran for its part, benefits from the Saudi knowledge that it’s oil production can be hit and hit hard, possibly even put out of business, meaning that Riyadh will now be much more careful in how it proceeds.

The United States and possibly even Israel will also be reading the tea leaves. In a recent interview Brigadier General Amir Ali Hajizadeh, commander of the aerospace unit of the Islamic Revolution Guards Corps (IRGC), said that Iran had been prepared to attack American bases in the Persian Gulf region if the U.S. had attempted to retaliate after Iranian forces recently shot down its intruding spy drone over the Straits of Hormuz. He said: “…if they wanted to attack, we would have attacked U.S. bases with missiles, and we were ready, and we would have targeted the U.S. base in al-Udeid in Qatar or al-Dhafra in the Emirates or their ships in the Gulf of Oman or Arabian Sea, and if they had hit us, we would have hit them back.”

Missile warfare has created a new reality. The presumed use by poorly armed Houthis of relatively cheap and available weapons to defeat multi-billion dollar defenses sends a message not only to the Saudis but also to Washington and Jerusalem, who have similar defensive configurations. The Saudis and Americans will be forced to rethink their options while Israel, for its part, has already clearly recognized that its air defenses would be overwhelmed by the sheer volume of missiles that opponents like Hezbollah would be able to send its way. It has called off several planned major attacks on Lebanon for that reason.

The final question has to be what will Washington and Riyadh do if they come to the conclusion, whether true or false, that Iran carried out the attack. President Donald Trump is, as usual, talking tough and threatening with his favorite “locked and loaded” metaphor, but he is basically unstable and this time he might actually be intending to pull the trigger. If he does, the Iranian response would undoubtedly be both serious and sustained. Many people on both sides would die.

The correct response would be for the Saudis, the U.S. and Israel to realize that more adventurism in the Persian Gulf region could easily spin out of control. Iran or its presumed proxies have sent the message that the consequences of continued provocations could be devastating for all involved. Time to back off on the threats and it is past time for the U.S. to stop knee-jerk support of the reckless actions undertaken by both the Kingdom and Israel.

0 thoughts on “Saudi Oil Attacks: Time to Back Off on the Threats”