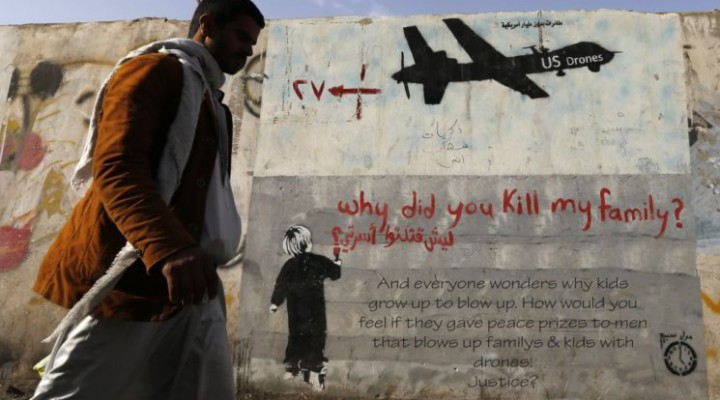 The Saudi monarchs are on their own and at the mercy of the Houthis and what they do next. The downfall of the scheming Crown Prince evokes a Shakespearian drama of treachery.

The Yemeni rebels’ drone blitz on the “nerve center” of Saudi Arabia’s oil industry was a devastating counter-offensive which potentially could end the four-year war in short order. What is even more catastrophic for the Saudi monarchy – especially the ambitious Crown Prince – is that the Houthi rebels have wielded the ultimate power to crash the kingdom’s oil economy.

Crown Prince Mohammed bin Salman (MbS) was the main architect of the disastrous Saudi war on Yemen. His military hard-man display was meant to consolidate his rise to power as heir to the Saudi throne. It was a calculation based on the blood of the Yemeni people. But now the war has gone from a callous game to a far-more dangerous threat to the House of Saud’s seat of power. If the Saudi oil economy is put at severe risk, then the lifeline for the monarchy is liable to be cut.

After last weekend’s spectacular air strike on the main oil processing plant in Saudi Arabia – northeast of the capital Riyadh, some 1,000 kms from Yemen – the Houthi military leadership is warning that more deeply-penetrating aerial attacks are on the way. The Yemeni rebels have demonstrated that nowhere in Saudi Arabia is safe.

Saudi air defenses and their multi-billion-dollar US Patriot anti-missile systems have been rendered useless against an-ever increasing arsenal of more sophisticated unmanned aerial vehicles (UAVs) operated out of Yemen. UN experts reckon that the Houthis’ UAV-X drone has a range of up to 1,500 kms, which means that all of the Saudi oil infrastructure located in the Eastern Province near the Persian Gulf is a viable target.

Last weekend’s air strikes carried out with 10 drones, according to the Houthis, caused Saudi oil output to shut down by nearly half. The main target – the Abqaiq refinery – processes some 70 per cent of all Saudi crude destined for export. It is not clear when the processing plant can be restored to normal function. It may take weeks or even months. But if the Yemeni rebels can inflict that extent of damage in one air raid, it is not hard to foresee how the Saudi oil-dependent economy could conceivably be brought to a crippling standstill.

“The only option for the Saudi government is to stop attacking us,” said a Houthi military spokesman following the drone strikes. The rebels also warned foreign workers in Saudi Arabia associated with the country’s oil industry to vacate.

The Yemenis have a gun to the House of Saud’s head. It must give the rebels great satisfaction to finally have the Saudi monarchy in their cross-hairs after four years of Yemen suffering relentless aerial bombardment and siege by the US-backed Saudi military. The Saudi-led war on its southern neighbor – the poorest country in the Arab region – was always an outrageous aggression under the guise of supporting the return of a corrupt crony who had been ousted by the Yemenis in early 2015. Up to 100,000 people have been killed – most of them from the indiscriminate bombing campaign by Saudi (and Emirati) warplanes supplied and armed by the US, Britain and France. Millions face starvation in what the UN calls the worst humanitarian crisis for many years.

The Saudi rulers, Western governments and media have tried to obscure the genocidal war on Yemen as a “proxy war” involving Iran, as if Tehran is the instigator of subverting Saudi Arabia from the south. Iran backs the Houthis politically, and perhaps also militarily more recently, but any involvement by Tehran is a reaction to the initial Western-backed Saudi aggression against Yemen.

Claims by US and Saudi officials that Iran is responsible for the latest air strikes on Saudi Arabia’s vital oil industry are more of the same obfuscation. Such muddying of the waters is an attempt to distract from the central point that the Houthis are retaliating with the legitimate right of self-defense after years of merciless slaughter inflicted on their people by the Western-backed Saudi coalition.

There’s another urgent reason for why the Saudi rulers and the US are trying to blame Iran for the latest drone attacks on the Saudi oil industry. If admitted that the air raids were carried out primarily by the Houthis – perhaps even with Iranian drone technology – then that admission points to the complete vulnerability of the Saudi oil economy and the very power structure of the monarchial rulers.

A hint of the trepidation being felt in Riyadh are reports that the latest air strikes have rattledstock markets for Saudi petrochemical companies. Worse, it is also reported that the attacks may delay the planned stock market listing of Saudi Aramco, the state-owned oil company. Worse still, the valuation of the company may be slashed due to the perceived risk from further Yemeni air strikes.

The planned Initial Public Offering (IPO) of Aramco – whereby the Saudi state is selling a portion of the company to private investors – has been one of the most talked about events in recent years among international business. The IPO which is due to be launched next year has been called the “biggest-ever” stock market sell-off.

In an extensive interview with Bloomberg in October last year, the Saudi Crown Prince, MbS, boasted that it was the “biggest IPO in human history”. He claimed then that Aramco’s total valuation was worth $2 trillion. If the Saudis sell off a 5 per cent share in the company, they are expecting to raise $100 billion in cash. The Aramco IPO is central to MbS’ ambitious diversification master plan for the entire Saudi economy, known as Vision 2030. The capital raised from the Aramco sell-off is intended to catalyze private sector employment and technological innovation in the oil-dependent kingdom whose budget is unsustainably propping up government-sector jobs and welfare largesse to prevent the young population of Saudis rebelling against the sclerotic House of Saud.

After the Houthis’ devastating air attacks on the Saudi oil heartland – the crown jewels of the kingdom – potential investors are now reportedly looking warily at the future risk of Aramco. Valuation of the company in the aftermath of the Yemeni drone strikes has been slashed by some estimates to $300 billion – that’s down by 85 per cent from the previous aspired-for $2,000 billion. If that downgrade holds or worsens with future Houthi attacks on Saudi oil infrastructure, then the capital raised from an IPO could shrink from the $100 billion projected by the Crown Prince to $15 billion. In short, his Vision 2030 plan is down the pan.

It must be alarming to the young Saudi potentate that US President Donald Trump has begun to play down any retaliation against Iran, saying that he doesn’t want to be drawn into a war.

That means the Saudi monarchs are on their own and at the mercy of the Houthis and what they do next. The downfall of the scheming Crown Prince evokes a Shakespearian drama of treachery.

0 thoughts on “Yemeni Killer Blow to House of Saud”