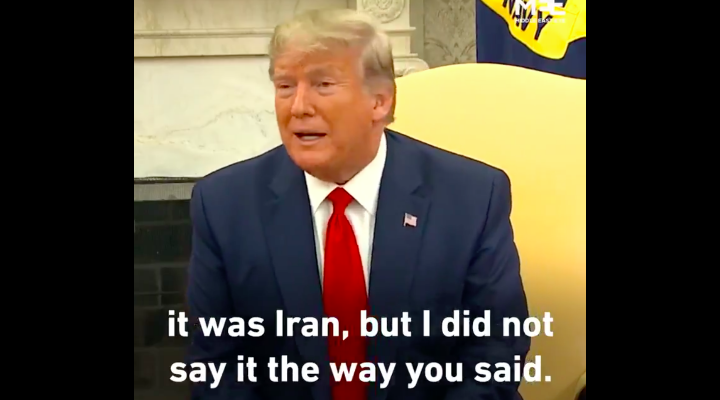 I’m expected to write something about the Trump administration’s warmongering against Iran over an attack on a Saudi oil refinery, because that’s typically what I do in this ongoing improvisational exercise of mine: I write about the behavior of the US war machine and the propaganda that is used to bolster it. It’s what my readers have come to expect. But honestly I find the whole thing extremely tedious and I’ve been putting off writing about it for two days.

This is because from a propaganda analysis point of view, there’s really not much to write about. The Trump administration has been making bumbling, ham-fisted attempts at manufacturing public support for increasing aggressions against Iran since it initiated withdrawal from the JCPOA a year and a half ago, yet according to a Gallup poll last month Americans still overwhelmingly support diplomatic solutions with Tehran over any kind of military aggression at all. In contrast, most Americans supported a full-scale ground invasion of Iraq according to Gallup polls taken in the lead-up to that 2003 atrocity. With the far less committed Libya intervention, it was 47 percent supportive of US military action versus 37 percent opposed.

That’s the kind of support it takes to get a US war off the ground these days. And it’s going to take a lot more than a busted Saudi oil refinery to get there, even in the completely unproven event that it was indeed Iran which launched the attack.

When I say that the imperial war machine requires public consent before it can initiate overt warfare, I’m not saying that the US government is physically or legally incapable of launching a war that the public disapproves of, I’m saying that it is absolutely essential for the drivers of empire to preserve the illusion of freedom and democracy in America. People need to feel like their government is basically acting in everyone’s best interest, and that it is answerable to the will of the electorate, otherwise the illusion of freedom and democracy is shattered and people lose all trust in their government and media. If people no longer trust the political/media class, they can’t be propagandized. Without the ability to propagandize the masses, the empire collapses.

So out of sheer self-interest, establishment power structures necessarily avoid overt warfare until they have successfully manufactured consent for it. If they didn’t do this and chose instead to take off the nice guy mask, say “Screw you we’re doing what we want,” and start butchering Iranians at many times the cost of Iraq in both money and in American lives lost, people would immediately lose trust in their institutions and the narrative matrixwhich holds the whole thing together would crack open like an egg. From there revolution would become an inevitability as people are no longer being successfully propagandized by the establishment narrative managers into believing that the system is working fine for everyone.

Think about it: why else would the mass media be churning out propaganda about disobedient governments like Iran, Venezuela, Syria, Russia and China if they didn’t need to? They need the citizenry they’re charged with manipulating to consent to important geostrategic imperialist maneuvers, or they’ll break the hypnotic trance of relentless narrative control. And make no mistake, maintaining narrative control is the single highest priority of establishment power structures, because it’s absolutely foundational to those structures.

This is why the warmongers have been favoring economic warfare over conventional warfare; it’s much easier to manufacture support for civilian-slaughtering starvation sanctions. It’s slower, it’s sloppier, and it’s surely a lot less fun for the psychopaths in charge, but because the public will consent to economic sanctions far more readily than ground invasions or air strikes, it’s been the favored method in bringing disobedient governments to their knees. That’s how important manufacturing consent is.

So a bunch of drama around a Saudi oil refinery isn’t going to do the trick. The US government is not going to leap into an all-out war which would inevitably be many times worse than Iraq based on that, because they can’t manufacture consent for it right now. All they’re trying to do is escalate things a bit further with the goal of eventually getting to a point where Iran either caves to Washington’s demands or launches a deadly attack, at which point the US can play victim and the mass media can spend days tearfully running photos of the slain US troops. If that happens they might gain their consent from the public. If not, we may see them get a little more creative with their “crisis initiation”.

Until then this is a whole lot of noise and very little signal, which is why I find this current circus uninteresting to write about. It seems like every week now the Trump administration is trotting out some new narrative with the help of the mass media explaining why the Iranian government is evil and must be toppled, and nobody buys it because it’s on the other side of the damn planet and it’s always about something silly like oil or broken drones. Their unappealing pestering about this is starting to remind me of a really awkward loser who’s constantly asking out the prettiest girl in the office over and over again; you just want to pull him aside and say dude, stop. She’s just not into you.

I think I’m going to stop paying as much attention to these high-noise, low-signal Trump foreign policy dances and wait until I actually see a hard, tangible thing to run commentary on instead, particularly with Iran. With the narrative battle still so far from success it’s entirely likely that such an event will not occur until at least 2021, possibly under a President Warren whose warmongering will be cheered on as a historic victory for women everywhere.

Until then, just remember: they’re trying to manufacture your consent because they need it. So don’t give it to them. Make sure others don’t, either.