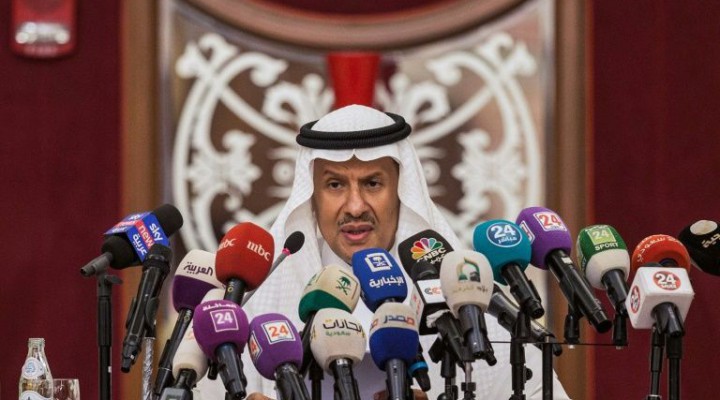 Houthis affirm drones were home-made and launched from Yemen

US Secretary of State Mike Pompeo was quick to blame Iran for Saturday’s drone attacks on Saudi oil installations that knocked out half the kingdom’s petroleum production. He said there was ‘no evidence’ that the ten pilotless aircraft that targeted the Abqaiq and Khreis plants were launched from Yemen, and insisted that they in fact came from Iran – though he provided no evidence of his own to support that claim. Indeed, he made the accusation before US investigators had even arrived at the site.

For his part, the spokesman for the Saudi-led coalition waging war on Yemen, Col. Turki al-Maliki, said preliminary investigations showed that the devices used in the operation were “Iranian-made.” Yemen’s Houthi Ansarullah movement, which claimed responsibility for the attacks, could well reply that the sophisticated and expensive weaponry used by Saudi forces to bombard their country is “American-made” – so where’s the problem?

We received a call at this newspaper on Monday from Yahya Sarie’ the Houthi military spokesman. He affirmed that the ten drones were indeed Yemeni-made and launched from Yemeni territory. They were powered by propellers and designed to evade Saudi radar, and their flight was controlled from a location inside Yemen.

“We do not lie,” Sarie stressed. “We have the courage to tell the complete truth without embellishment.”

He added that when his group announced it had carried out the operation in collaboration with unnamed persons inside Saudi Arabia, that was not intended as a reference to supporters within the Saudi Shia community. “We have honourable allies inside Saudi Arabia who cooperate with us, including in some cases within the regime,” he said.

He also addressed speculation about why the Houthis had been attacking targets in Saudi Arabia but not its coalition partner the UAE. “I reply to those who ask why we do not target the UAE by saying that the UAE has reduced its involvement in coalition air raids and has also reduced its presence on the ground in Yemen. But if it engages in any escalation, our response will be the same as our response to Saudi Arabia, which we target because it leads the coalition in the war, if not even bigger,” he said.

The Houthis operate as part of the ‘axis of resistance’ which includes powerful and well-armed paramilitary groups like Lebanon’s Hezbollah and Iraq’s al-Hashd ash-Shaabi with the direct supervision of Iran’s Revolutionary Guards. It seems that a decision has been taken to activate all these groups to put pressure on the US administration to lift sanctions on Iran and recommit to the nuclear deal, or else attacks will continue against Saudi Arabia’s oil heartlands and any other country that stands in the American trench.

Regardless where it was launched from and whether it used drones or ballistic missiles, the latest attack has exposed both the fragility of Saudi Arabia’s defences – the country proved unable to protect its most vital installations – and the reluctance of the US to defend its allies, despite the billions of dollars it extorts from them as the price of that defence.

The question now is what might happen in the coming days once the dust settles. In other words, will the US exact revenge against Iran for this attack on its ally, and what form will that revenge take: limited missile strikes, an all-out assault, or yet more sanctions?

One cannot be sure. The Trump administration declined to respond when the Iranians shot down a US spy drone over the Strait of Hormuz in June, fearing Iranian retaliation. It seems unlikely it would launch revenge attacks in support of Saudi Arabia and its oil industry. Trump’s tweeted expressions of solidarity with the kingdom sounded no different to those made by the Arab governments that seek to court its favour. Yet nothing can be ruled out.

The attacks on the oil facilities could be followed by others aimed at upping the pressure on Saudi Arabia, perhaps targeting civilian infrastructure such as desalination and power plants. Trump will only have himself to blame if this happens. He began the escalation by scrapping the nuclear deal and imposing draconian sanctions aimed at suffocating Iran economically. Who knows, Iran could yet prove to be his undoing at the next elections.

0 thoughts on “Will Trump Take on Iran?”