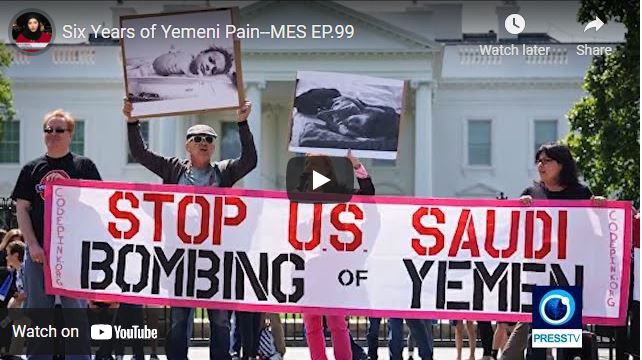 The Saudi war on Yemen shows no real signs of abating as it enters its sixth years. Civilians from across the country continue to bear the brunt of unjustified Saudi military hostilities and unlawful aerial, land and sea blockades that resulted in a MBS-made humanitarian crisis which spiraled to approximately 20 million people waking up hungry every day.  Despite the atrocities, Saudi Arabia has been trying for over a year now to exit the war as the Yemeni armed forces’ advancement led to the fall of major areas once held by the Saudi occupation and its proxies in the north of the country. To discuss this issue with us from Sanaa is Mohamad Al Shami political commentator.

In retaliation for the stepped-up Saudi-led military campaign and blockade against the Yemeni nation, the Yemeni Armed Forces carried out on Friday a new attack with six bomber drones targeting Aramco in the Saudi capital, Riyadh. The news comes as Yemeni armed forces have been making major gains in their decisive push to liberate the city of Marib from the grip of Saudi occupation troops and their proxies. To discuss this issue with us from Sydney is Jay Tharappel member of the Yemeni solidarity council.