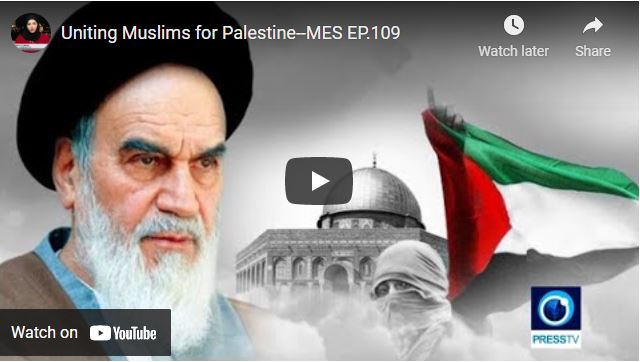 The statements of Imam Ruhollah Khomeini reveals that the Palestinian cause occupied an advanced position in the principles and interests of the late Imam. He promised us that we still live to see Palestine liberated and that the Israelis will be expelled from our region with the firm determination of the people in our region.  Imam Khomeini made it clear that we will expel the Zionists who are still displacing and killing our children and aspiring to expand in our land and in all our region. Since the early 1960s, late Imam Khomeini began his long struggle against imperialism and Zionism making Palestine the Arab and Muslim central cause and its liberation the top priority.

To discuss this issue with us from Qom is Sheikh Muzaffer Haidar, creative director at Islamic Pulse.

The UN Human Rights Council decided Thursday to create an open-ended international investigation into violations surrounding the latest Israel aggression against Gaza accusing Israel of “systematic” abuses in the Palestinian territories and inside Israeli occupied cities. UN officials said they saw no evidence that civilian buildings in Gaza hit by Israeli fighter jets were being used for any military purposes, rather the aggression was disproportionate and might constitute war crimes.

To discuss this issue with us from Damascus is Eva Bartlett independent journalist who lived in Gaza.

Phony History: Why There Will Be No Peace in Judea, Palestine, Israel or Whatever