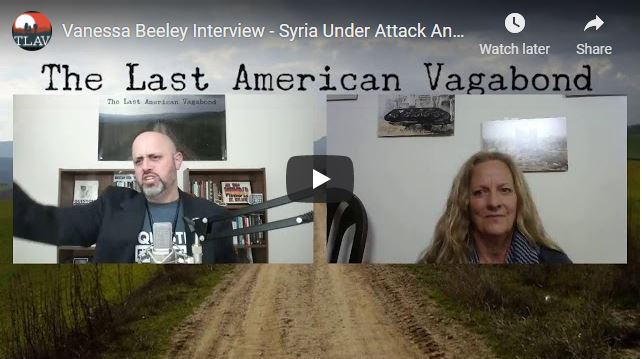 Joining me today is Vanessa Beeley, here to discuss the alarming increase of illegal military action in Syria by the US and Israeli governments, all being overshadowed – intentionally so – by the “greatest pandemic in a century”, as they so dishonestly continue to put it. In this interview we go over the ongoing illegal occupation of the sovereign nation of Syria; the burning of Syria’s wheat fields while people are starving; the publicly acknowledged theft and sale of Syria’s resources; the repeated bombings of civilian areas; and of course, the endless US government sanctions ensuring the country never finds peace. We are also going to discuss the way in which the BBC has carried out an aggressive intimidation campaign against Vanessa herself by publishing an image of her personal vehicle used in Syria with more than enough information to ensure those with the intent could now seek her out and identify her. These are not the actions of an honest news outlet, but rather the actions of a criminal outfit trying to scare off the real journalists uncovering their complicity in ongoing war crimes.

This is what you voted for w/ Vanessa Beeley

The US airstrike on Syria: Meet the new boss, same as the old boss, and the boss before that