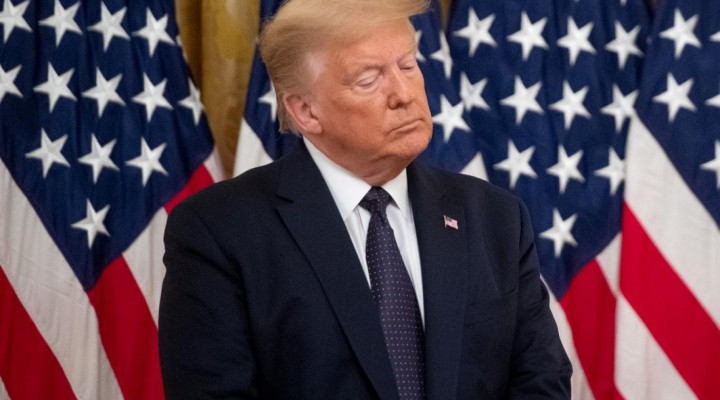 Iran has issued an arrest warrant for US President Donald Trump and dozens of others it believes carried out the drone strike that killed Iranian General Qassem Soleimani in January.

The Iranian prosecutor was reported as saying that Iran requested an Interpol “red notice” be put out for Trump and 36 others, which represents the highest-level arrest request issued by Interpol.

The move will no doubt be dismissed in Washington, despite the fact that the actions by the US in January on Iraqi soil had all the appearance of an extrajudicial assassination of a senior government official.

Beacon of the free world?

In the course of history, there have been nations and people who have been exceptional. Switzerland has never bothered any other nation, nor lectured anyone about policies that should be pursued; it has constantly minded its own business, creating a highly admired and envied society.

In view of the disasters that certain other nations have inflicted on humankind, Switzerland fully deserves such a title. According to global perception, however, the truly exceptional nation on earth is not Switzerland, but the United States of America.

During the 20th century, the US became the beacon of the free world, providing an outstanding contribution towards defeating Nazi-fascist totalitarianism and an indispensable one in making the Soviet communist regime collapse. It has created and enforced the rules of the current international order, offering an irresistible model of an open and free society shaped by the market economy, aimed at growth and progress.

Just three decades ago, after the Berlin Wall and the Soviet Union fell, American success seemed so widespread that a political theorist even suggested that “history had ended”. But unfortunately, since the end of the Cold War, US soft power – the country’s ability to inspire by example – has lost much of its original appeal.

The decline had already begun with former President Bill Clinton, who subscribed to a selective multilateralism led unilaterally by Washington, as shown in the bloody Balkan crisis, the failed Middle East peace process, the Rwanda genocide and the illegal war in Kosovo. Clinton also encouraged financial deregulation, which later produced economic disaster and widespread inequality.

Former President George W Bush took an even more unilateral approach, built on a post-9/11 “with us or against us” policy, paving the way for bloody and endless wars in the greater Middle East. Under his watch, the much-vaunted American neoliberal economic model crashed with the 2008 financial crisis.

His successor, Barack Obama, tried to smooth some angles, to recover some lost soft power – but US policy changed more in words than deeds, and endless wars continued, adding the Libya disaster to those in Iraq and Afghanistan.

The Obama administration signed the nuclear deal with Iran, but running counter to the UN, did not abolish sanctions, crippling the landmark agreement from the start.

Since 2017, US President Donald Trump has pursued Bush’s policies on steroids, putting the US at odds with the rest of the international community and the rule-based world order. While he has been engaged in “making America great again”, the country’s internal contradictions, unreformed economic model and cultural polarisations have exploded, due mainly – but not only – to a disastrously managed coronavirus pandemic.

The protests now raging after the killing of George Floyd show that – its civil war and civil rights movement notwithstanding – the country has not fully reckoned with one of its original sins: racial discrimination.

There is a widespread feeling that the US is no longer the greatest nation in the world, and it is doubtful that its “exceptionalism” is still justified. But the Trump administration seems not to have any doubt that it still stands above all other nations.

The International Criminal Court (ICC) recently opened an inquiry into alleged war crimes committed in Afghanistan since 2003. The US reaction was an executive order, issued on 11 June, determining that any attempt by the ICC to prosecute US personnel without US consent, or the personnel of allied countries (presumably Israel), “constitutes an unusual and extraordinary threat to the national security and foreign policy of the United States”. The order provides for sanctions against any individual involved in the ICC inquiry.

The US accusation that the ICC probe was politically motivated, and the claim that by not being part of the ICC the US cannot be subject to its jurisdiction, are both weak arguments. The probe is aimed not only at alleged US troops’ misbehaviour, but also that of the Taliban and Afghan security forces.

Furthermore, the ICC’s statute authorises the prosecution of crimes committed by citizens of states that are not signatories if they occur on the territory of a state that recognises the court’s jurisdiction.

The political reasoning that has led the beacon of the free world, democracy and rule of law to consider an international tribunal charged with investigating certain ugly crimes as a threat to its national security is beyond any rational understanding.

The more depressing aspect is that this view has an incredible bipartisan consensus in Washington – an attitude similar to a soccer game where the referee’s decisions must be followed by only one of the two teams.

With hundreds of thousands of soldiers spread around the world, the US argument might appear more understandable if the US government did not claim a double standard, asking that its jurisdiction have universal application.

Washington pretends that its unilateral sanctions against Iran require global compliance, and for this purpose, it is implementing secondary sanctions against anyone who breaks that expectation – a position incompatible with international law. One of the most striking examples was the 2018 arrest in Canada of Chinese national Meng Wanzhou, the daughter of Huawei’s founder, for allegedly violating US sanctions against Iran.

If the US dislikes Iran and its policy, it has every right to take measures against it, but it cannot dictate that all other states must follow the US line or else incur sanctions.

The ICC’s statute has been signed by 123 states, two-thirds of the international community. The court has the commendable purpose, mandated by the UN, to prosecute horrors such as genocide, war crimes and crimes against humanity.

It is difficult to understand why a great democracy like the US should be concerned by the court’s activity and decide to sanction it. When will US political elites understand that such behaviour can only further damage their decreasing soft power and fuel resentment against their nation?

Is the US really so exceptional, so error-free, that it cannot tolerate any criticism of its conduct and policies? Any nation that claims to hold moral leadership, and feels confident about its credentials, should not threaten its allies and partners into supporting its case.

America’s War on Her Own Children

0 thoughts on “American exceptionalism is no longer acceptable”