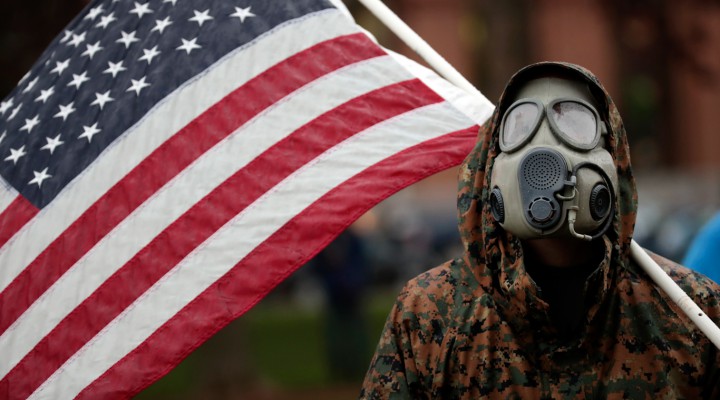 Evident by its response to COVID-19, its brutal crackdown on racial-justice protesters, and its inability to hold free and fair elections, experts are in agreement: the United States is a nation in decline.

MPN– Evident by its response to COVID-19, its brutal crackdown on racial-justice protesters, and its inability to hold free and fair elections, experts are in agreement: the United States is a nation in decline.

The United States had months to learn from China and prepare for the worst, but the Trump administration spent that time dismissing COVID-19 as a liberal “hoax” intended to force the president out of the White House. While being warned privately that the pandemic would rip through America if he did not act, Trump publicly claimed that he had the situation under control and that it would naturally disappear by April. By the time the United States became the country with (by far) the most fatalities, he was shifting the blame onto China and extolling the virtues of injecting bleach into the body as a method of fighting the virus. At a public rally in COVID-19 spiking Oklahoma, he argued that the U.S. should simply test fewer people so the figures — along with the negative publicity — would decrease. His government has also taken the opportunity of a worldwide pandemic to attempt to overthrow the governments of Iran and Venezuela.

But the president’s latest move is the most striking. Last night, in response to news that the United States was entering a clear second wave of infections, Trump filed a legal brief requesting the Supreme Court to overturn the Affordable Care Act (ACA), an action that would strip some 23 million Americans of any healthcare insurance in the middle of the biggest public health crisis in living memory. The bill is also expected to prevent COVID-19 survivors from receiving treatment for long-term respiratory damage. However, if the ACA is repealed, the top 0.1 percent of Americans are projected to save nearly $200,000 per year in reduced taxes, according to a recent report from the Center on Budget and Policy Priorities.

Italy down to only 190 Covid cases yesterday after their insane outbreak. France down to 81. Spain around 330. The USA? 33,399. Birdbrained nation.

In his book “Failed States: The Abuse of Power and the Assault on Democracy,” Professor Noam Chomsky defined the concept as a country with a weak, non-existent or dictatorial government, where elections, if they occur at all, are farcical. A failed state, according to Chomsky, is one with a government incapable of satisfying the basic needs of its citizens and is a danger to the world and its own people, categorizing the U.S. as meeting these criteria. While this opinion was limited to the margins in 2006, in the wake of a disastrous 2020, the idea has quickly become mainstream.

The Atlantic’s George Packer wrote that the virus has exposed “a corrupt political class, a sclerotic bureaucracy, a heartless economy, [and] a divided and distracted public.” The U.S., Parker argued, has reacted “like a country with shoddy infrastructure and a dysfunctional government whose leaders were too corrupt or too stupid to head off mass suffering,” noting that Russia, Taiwan and the United Nations sent emergency humanitarian aid to the country.

Elsewhere Trump’s government has been described as a “death cult” and a “failed state in slow motion,” compared to Afghanistan.
Last night, Trump himself likened multiple cities, including Chicago, Baltimore, Oakland and Detroit to the country the U.S. invaded in 2001, telling Fox News’ Sean Hannity that they were “like living in hell” and “worse than Afghanistan.”

A nation in decline

In response to nationwide protests over the killing of George Floyd, the president reacted angrily, calling participants “thugs” and “looters,” suggesting that the National Guard should open fire on them. “When the looting starts, the shooting starts,” he said.

The election chaos across the nation is another harbinger of worse things to come. In Georgia, voters in poor, black neighborhoods waited for up to four and a half hours to cast ballots, while those in wealthier, white areas had few problems. Across the South, over 1,200 polling stations have been closed since 2013. In Kentucky, voters literally had to break the doors open to the only polling station assigned to more than half a million mostly poor, mostly black, people. Trump, who in May said that Republicans would never be elected again if more people cast their ballots, has launched a searing attack on expanding the postal voting system, claiming that the November elections have already been rigged against him and that “foreign countries” will stuff the ballot with votes for Democrats. “IT WILL BE THE SCANDAL OF OUR TIMES,” he thundered. Thus, he appears hellbent on forcing Americans to go to the polls in person during the world’s most deadly coronavirus pandemic in the modern era.

Public opinion surveys show that Trump’s COVID-19 response and his handling of the George Floyd protests have greatly damaged his reputation, and he now trails Democratic candidate Joe Biden by double digits. However, there is an increasing amount of speculation that if he loses, he will not leave the White House, effectively becoming a dictator. The fact that this is even being discussed is a tacit acceptance that the U.S. is already on the way to becoming a failed state.

Feature photo | A protester wears a gas mask and carries an American flag during a rally in response to Michigan’s coronavirus stay-at-home order at the State Capitol in Lansing, Mich., May 14, 2020. Paul Sancya | AP

0 thoughts on “Is America a Failed State? Trump’s COVID Response Has Many Saying “Yes””