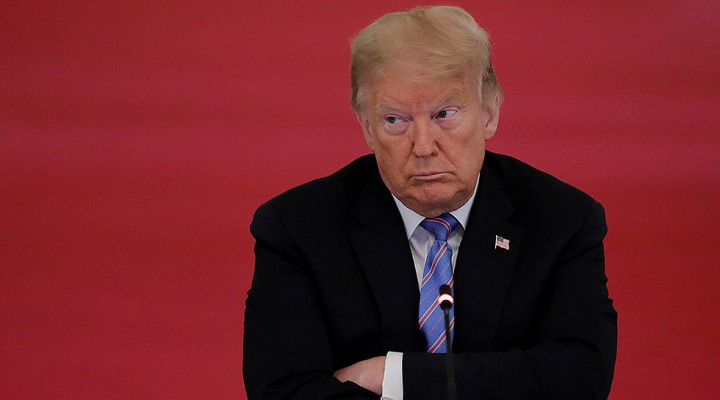 The arrest warrant issued by Iran to Interpol for Donald Trump over the assassination of its Quds Force commander might have some unusual takers. Such as… Democrats in the US?

American politics have become so toxic and factionalized it is not beyond the realm of possibility that opponents of the president might consider arresting him if he stepped into their state jurisdiction.

Democrats and their supportive media have Trump down as a Russian agent anyway (that is, a domestic enemy). Now this week, he is being assailed for treachery against the armed forces by allegedly ignoring intelligence briefings claiming that Russian operatives were paying Afghan militants to assassinate US troops.

How bad can Trump’s reputation get in the eyes of obsessed Democrat rivals? If he is guilty already for the litany of crimes and misdemeanors he is accused of, then why not take advantage of an Interpol red notice as he steps off Air Force One in a Blue State?

But in all seriousness, the arrest warrant issued by Iran for the murder of General Qassem Soleimani in January shows how disreputable the office of the US presidency has become. Trump has openly bragged about ordering the assassination of the widely revered Iranian commander.

There was a time when American presidents would at least use discretion in liquidating foreign enemies. Not Trump. He reveled in the murder. For the more liberal apologists of America’s Murder Inc., Trump’s kind of bravado is embarrassing. The president is just not supposed to divulge the bloody reality of Washington’s lawlessness.

It is doubtful that the Iranian warrant will go beyond symbolism. The Trump administration has dismissed it as a “propaganda stunt.”

France-based Interpol, which serves as an international agency linking national police forces, told RIA Novosti if it receives a request to arrest Trump, its own rules will not allow it to act on it.

Arguing that the Iranian move is illegitimate because it is “politically motivated” is void. Arguably, Trump is indeed liable for authorizing the murder of General Soleimani, whose car was hit by a US drone as it drove away from Baghdad International Airport. The Iranian authorities have therefore every right to seek the prosecution of Trump and dozens of other administration officials designated for indictment over the Soleimani killing.

One can be sure that if the shoe was on the other foot, the Americans would be screaming for Interpol red notices against Iranians.

It’s extremely remote Trump will ever travel to a country that might conceivably make an arrest on behalf of Iran.

Nevertheless, the arrest warrant is bound to give him pause, as the Iranian authorities have pledged to prosecute Trump even after he steps out of office and reverts to being a private citizen. The Donald will have to do security risk assessments when opening up new golf courses in the Middle East.

But the ultimate symbolism is an American president who has been sanctioned by another country for arrest. The mere fact that Interpol will even process an application for an international arrest warrant is in itself an astounding blemish on the American presidency.

Flagged by Twitter for possible hate speech, deprecated by European allies for lacking leadership, and now his name put on a crime database, Trump is bringing disrepute on an office once seen as the most powerful in the world.

No wonder if some US opponents would like to see him detained, if only tongue in cheek.