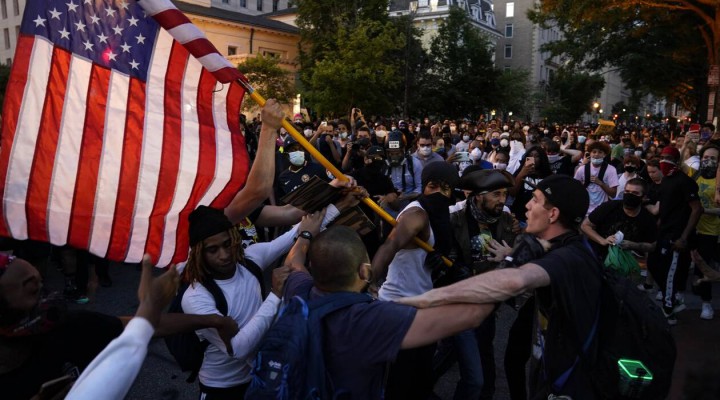 The riots, pogroms and protests going on in the US right now are interesting for their political depth, their complexity, and their exposure of numerous details that had not previously been visible behind the curtain of political correctness and mythological constructs. On the one hand, they show the potential for social conflict, the reasons for which are rooted in the US state system itself, and, on the other, they betray the weakness of the government, whose response to such unrest in the past was harsh and merciless.

When George Floyd, a black repeat offender, tried to purchase something in a shop with a suspicious twenty-dollar bill, the cashier called the police, which was followed by the incident that sparked the current protests. In fact, the chain reaction began immediately, moving from protests to pogroms, with few expressing an interest in the events that had led up to it. Under current US law, however, the police have the right to use force against suspects who are putting up a fight. It was a routine incident, in other words, but the press and certain activists have turned it into a new political fetish that is being publicised under the banner of an anti-racism campaign.

Minneapolis, a fairly prosperous city compared with other similar “Rust Belt” metropolitan areas, became a hotbed of violent protest that quickly spread to other states.

This is all happening amid the ongoing coronavirus pandemic with a large number of deaths, but it seems that the virus does not affect the rioters. The rioters themselves can be divided into several groups: anti-system elements, including black people, anarchists and other marginal political Antifa-type groups; looters that rob shops; human rights defenders searching for scapegoats; and politicians and government officials who, for a variety of reasons, are supporting the protests.

All of this is threatening to develop into new political and historical labelling. On 1 June, a small section of a street in Washington was renamed Black Lives Matter Plaza. This was done by order of the capital’s mayor, Muriel Bowser. In other places, meanwhile, monuments to specific people and collective memorials are being desecrated.

The protest campaign has also taken on a new dimension with new demands, and a new slogan has appeared – “Defund the Police”. Press outlets that are sympathetic to the protesters, either overtly or covertly, have started publishing all kinds of research on the degree of militarisation of law enforcement agencies in the US, and the amount of money that has been spent on their activities. It has been reported that, in 2019, the New York police spent $187 million on counter-terrorism operations and a further $116 million on police training. There are probably some who think this is too much and, under pressure from taxpayers, or, rather, the illusion of this pressure, some legislators will hurry to turn it into political capital.

However, a number of politicians, mostly Democrats, have already been quick to reap maximum dividends from the ongoing chaos. On Monday 8 June, Democratic US presidential candidate Joe Biden visited the family of the late George Floyd. There are voices saying that Biden should base his campaign platform on demilitarising US police forces.

Some newspapers have actually published guides on how to protest safely, and how to protect yourself from digital surveillance and the potential legal implications.

The funeral of the murdered black man took place in the very best traditions of a Hollywood Mafia movie – a golden casket, ritualistic kneeling, and a lot of pathetic talk about human rights. If you could forget the background story and just look at this one image, you would think that it was a wealthy businessman or some high-ranking official that was being buried rather than a repeat offender.

Organised violence, meanwhile, is spreading through the country. Some are throwing Molotov cocktails at police cars, while others are making homemade explosives. Bombs are being thrown at the police. And, in Richmond, a black teenager shot two police officers. We have also seen the first police fatalities from homemade explosives. At this rate, the spiral of violence in the US will only continue.

However, the police, the National Guard, and private security companies have been deployed to the fullest extent possible – helicopters, armoured vehicles and even tanks have been on the streets of many US cities. In Washington, army helicopters were used to try and disperse the crowd. After that, a number of states and cities introduced restrictions on the police using riot-control weapons when dispersing demonstrators. These incidents are also being politicised.

No less interesting is the role of corporations in these events. Many hurried to support the riots and even offered some support to the looters and those groups who were protesting against the government.

This is a characteristic symptom of advanced globalisation, when transnational corporations feel powerful and wealthy enough to challenge governments, albeit in a relatively indirect way. Many of the heads of these corporations are forgetting the lessons taught to us by history that many capitalists who financed revolutions and coups were removed from the picture later on when they were no longer needed. The residue of today’s state protectionism, even in the US, is a bone in the throat for global capital. There were warnings about a “plutocratic insurgency“, where private capital in the US widens the economic gap, leading to a surge in criminal activity and social uprisings.

There are also other interesting “coincidences” showing that large-scale protests are somewhat systematic in nature no matter where they are. Well-known pianist Davide Martello, for example, who performed in Istanbul and Kiev during the anti-government campaigns, was recently spotted in Minneapolis during the public protests. Incidentally, the coups in Turkey and Ukraine were also supported by some of the companies listed above, such as eBay founder Pierre Omidyar’s foundation.

US analysts have noted that “America is a fragile state, and stabilization is off the table in the near term.” There are harsher assessments. “We’re a backward, dysfunctional, angry, anti-intellectual mess. Not just Trump, cable news, or Twitter but the whole freakin’ culture. […] Future historians will mark the 2020 plague as the beginning of the end for the American ‘experiment’”, writes Duncan Moench.

Given that all this is happening on the eve of the presidential election, time is running out for Donald Trump to make effective decisions and bring the situation back under his control. His circle of opponents is growing. Even his former defense secretary, James Mattis, has called Trump a “threat to the Constitution”. Independence Day on 4 July could either prove a catalyst for a new wave of protests or a starting point for a national reconciliation, but this will be extremely difficult to achieve. American society is more polarized than ever.